In the mid-1960s, Joe Cino, founder of the iconic Greenwich Village coffee-house theater Caffe Cino (hailed as the birthplace of Off-Off-Broadway), urged some of his trailblazing playwrights to write plays about men. Among those first openly gay plays were Lanford Wilson’s The Madness of Lady Bright, Robert Patrick’s The Haunted Host, and Robert Heide’s The Bed, which Andy Warhol made into a film after seeing it at the Cino.

Born in Irvington, New Jersey, Heide, one of the seminal playwrights in the Off-Off-Broadway movement, began his early studies in the theater department of Northwestern University in Chicago. After moving to New York, he studied for two years with Stella Adler, then apprenticed with John Houseman at the American Shakespeare Festival in Stratford, Connecticut, and later studied with Uta Hagen and director Harold Clurman. Subsequently, Edward Albee, his mentor and close friend, invited him to become a member of the Albee/Barr/Wilder Playwrights Unit.

In the 1960s, Heide acted in the Warhol films Camp and Batman Dracula with underground film pioneer Jack Smith, and wrote the scenario for Lupe, with Superstar Edie Sedgwick in the titular role. In addition to his work at the Caffe Cino, his plays have been produced at La Mama, Theater for the New City, and Manhattan Theatre Club, among other venues. His recently published book, Robert Heide 25 Plays, offers a full compendium of his scripts, including The Bed, along with original production photos, related essays, and an in-depth history of the genesis and development of Off-Off-Broadway theater and, simultaneously, Gay Rights. 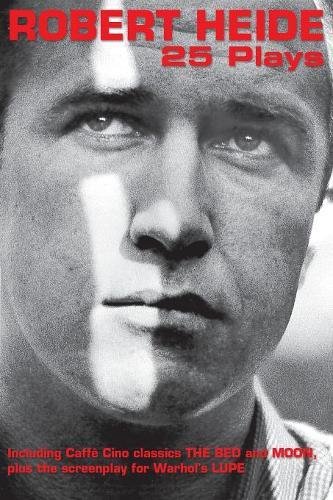 As part of its celebration of the 50th anniversary of the first Gay Pride Parade, TOSOS (The Other Side of Silence – New York’s oldest and longest-producing LGBTQ+ theater company) is presenting a new online production of The Bed. Directed by TOSOS Artistic Director Mark Finley and featuring Christopher Borg (nominated for a 2020 Lucille Lortel Award for his role in The Confession of Lily Dare) and TOSOS member Desmond Dutcher, the one-act play will be livestreamed at 6 pm, Saturday, June 20, on YouTube, where a video recording of the performance will remain for future viewing. The theatrical event is free, but viewers are invited to make a voluntary tax-deductible donation to benefit the non-profit company.

I spoke with Bob (a dear friend and long-time colleague in the Warhol circle) about the background of The Bed and its significance in the Sixties and beyond, and with Mark about its relevance today and specifically for TOSOS.

How did The Bed originate?

Bob: West of the Moon – an earlier play I wrote for two men – was presented Off-Broadway by Lee Paton Nagrin, as part of a triple bill at New Playwrights Theater in 1961. The young characters in my play, who meet in a Greenwich Village doorway during a rainstorm, were cast with two top Broadway actors: Paul Giovanni, who played a down-and-out street hustler named Luck; and Joe Ponezecki, portraying an innocent young man named Billy.

Critics from all of New York’s top seven newspapers arrived in the lobby for the opening. Word had gotten out that ‘homosexual’ characters were featured, and in those days such a subject was forbidden; newspapers never even used the word in print. West of the Moon was singled out and condemned, with one critic stating, “Robert Heide will never write another play again.” Another wrote, “Heide should go home and break his typewriter over his hands.”

At the time, I was thinking that I would probably never write a play again, but later I ran into Joe Cino, who said he had seen West of the Moon and wanted me to write another one just like it for his Caffe Cino. So in 1965, I wrote The Bed, an existential time-warp scene in which the two men, drinking and drugging, could not get out of their bed for days or weeks at a time. This one got a rave review from The Village Voice critic Eleanor Lester, who also wrote about it in The New York Times magazine, noting its hard focus on “the anguish of existence.”

Lester’s review gave the play a jump-start. After the run at the Cino, the director Robert Dahdah took the play and its actors to engagements throughout the city, and in 1966, Andy Warhol made the film, which premiered in a split-screen format at Jonas Mekas’s legendary Film-Makers’ Cinematheque.

Why did TOSOS decide to produce a new revival of The Bed for this big 50th anniversary year of the Pride Parade?

Mark: I’ve been wanting to work with Bob forever and had planned to put him in the June Pride slot, in our planned Chesley/Chambers playwrights project. Then COVID happened and that reading series had to be postponed. We at TOSOS were trying to think of viable ways that we can produce and support theater at a time when we can’t have more than a few people in a room. I thought of Bob’s The Bed and thought if we cast an actual couple, we could essentially tape it or livestream it.  So that’s what we’re doing!

When I read the play, I’m blown away at how appropriate it is to these lockdown times.  It’s about a couple that is forced to take a hard look at themselves and their world, because literally nothing is happening in it. It just goes to show again the foresight and genius of those Cino writers. It’s not set in our time . . . or is it?  Bob hit it right on the head.

Many thanks to both of you, and to TOSOS, for the conversation, and for bringing this ground-breaking work back for a new generation of viewers to celebrate Gay Pride and Off-Off-Broadway theater.

The Bed will livestream on Saturday, June 20, 6 pm, and will continue to be available on the TOSOS YouTube channel. To view, go online.