Kora is a young woman with a strong connection with death. When her partner, Cato, dies in a plane crash, Kora tries to bring him back. While her mother is trying to reconnect with her, Kora’s father returns unexpectedly and they have to face their fears about moving on. But is it possible to make the transferal from one phase of our lives to the next? 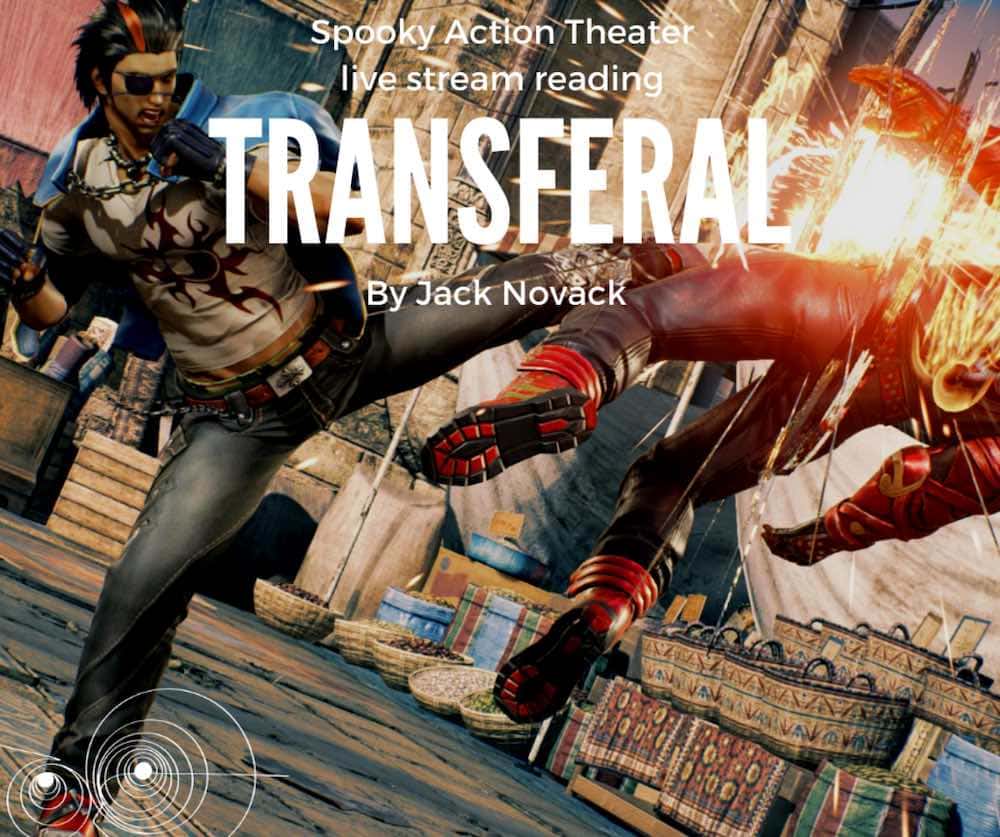 Roberta: When did you write Transferal and where the inspiration came from?
Jack: I started writing this play in college for my playwriting course. The play started as an image—a strange vehicle with its Pilot and odd passengers, and a girl in a cluttered room that used to be hers but wasn’t anymore. It started out that Kora was transferring schools for some reason, which I think was because I knew a few people who were in the midst of that process at the time, then I found that something much deeper was going on. It’s come a long way, through many drafts, since then, and a lot of influences have found their way in over that time.
On your website, you list seven things you like to write about [see bio below]. Which ones did you include in Transferal and how?
Just about all of them. But especially #3: People who struggle helplessly against the passage of time. Transferal is about people who are, in various ways, trying to resist letting go of the past and moving into the future.
The play is about relationship, relationship between mother and daughter, wife and husband, daughter and father, girlfriend and boyfriend. What in your opinion is the difference between these relationships and how they intersect in this play?
For me the play explores how all kinds of relationships we have with people leave an impact on us that lasts a lifetime and continue to affect our lives for years afterward. I think the different relationships between the characters of the play differ not so much because of the type of relationship but because of the particular dynamics between each pair. I find it interesting how mixing and matching tends to bring out different aspects of each character—different sides of their personalities that they reveal when they are with certain people.
How are these characters relevant to audience members?
I guess that’s up to the audience. Different people have connected with different characters in this play. I didn’t do this on purpose, but the four mortal characters in the play do span a pretty broad range of human qualities: introvert/extrovert, organized/flexible, sensitive/stoic, etc. I hope people are able to find something in these characters’ qualities or struggles that they can relate to.
How is gaming part of the play?
Gaming has always been part of my life, and is attached to a lot of nostalgia. In the original draft of the play, video games hadn’t entered into it yet. Instead, Kora and Rose’s nostalgia device was Tae Kwon Do—that’s how they resurrected the memory of Kelcey. Over time, I examined that—I never did Tae Kwon Do, why did I come up with that? Then I realized it was because of the Tekken game series. I had a lot more of a personal connection to that, so I changed it in the play.
In the play video games are a conduit to memory, but they also provide comfort. There is a lot of satisfaction in the progression of a video game, which is why “game-ifying” has become so prevalent as a strategy for other tasks and objectives—think about Duolingo, or Headspace, with it’s “levels” of meditation. A game helps us visualize our progress through life.
Is this the first time Transferal will be read on Zoom? What is your expectation
Yes. But after one rehearsal, I’m excited about it. The close-up nature of Zoom does allow us to explore a lot of subtlety with more ease, which is something I enjoy. I will miss being in the room with audience members—hearing reactions, sensing the audience, is so valuable in a reading. And getting in-person feedback and questions is very different from relatively anonymous online comments.

After winning the Agnes Nixon Playwriting Award at Northwestern University (with his play A Decade of Wandering), JACK NOVAK knew he wanted to be a playwright. Having written numerous short plays, he adapted one into a full-length—The Great Lt. Sprinkle Didn’t Save Me was then workshopped and produced by Field Trip Theatre. For two years he was the resident playwright of Speak Out Onstage (at Imagination Stage), crafting two full-length musicals for young actors—Interface and Fanatics. Other plays that have received workshops and readings include Transferal (Rorschach Theatre, Spooky Action Theatre), Journeying Jack (Asheville Creative Arts, Aurand Harris Memorial Playwriting Award), and Crazy Weird (Adirondack Shakespeare Company).