With the official announcement from The Broadway League earlier this week that all Broadway performances are now suspended through January 3, 2021 (at the earliest), theater-makers and theater-lovers are faced with the very real issue of finding satisfying alternative modes of presentation and viewing for more than just the short term. Added to that is the fact that surveys have consistently shown that audiences would be hesitant to return to the theater even after the green light is given for reopening, until they feel that it is completely safe to do so – presumably after an effective vaccine and/or treatment for COVID-19 has been developed. 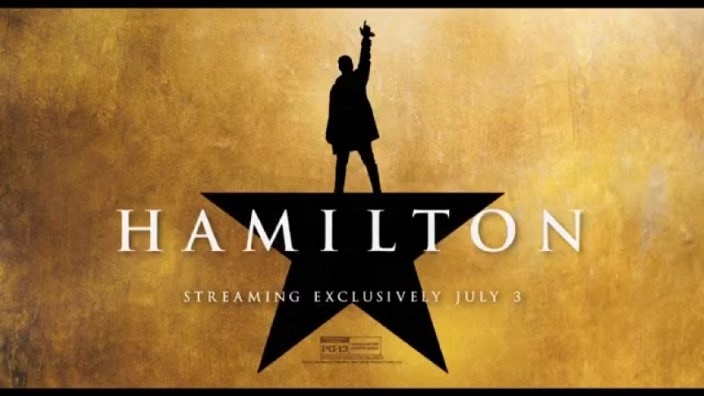 The current streaming of the highly anticipated ‘Hamilfilm’ – originally scheduled for release in movie theaters on October 15, 2021, but switched to the digital format and showing more than a year sooner in light of the pandemic – offers a consummately professional and entertaining substitute for audiences everywhere to see Lin-Manuel Miranda’s theatrical phenomenon Hamilton without having to leave home. But is it a comparable experience to being in the theater, in person, for a live performance? And is it a viable solution for other Broadway productions to follow?

When I attended the smash-hit musical at the Richard Rodgers Theatre, I was fortunate to have front-row seats in a sold-out house. It was two years after the show had made its Broadway debut in 2015, and the original cast, including Miranda starring in the eponymous role, was no longer intact. The Disney+ film, however, was shot over three dates in 2016, two weeks prior to the departure of the members of the premiere company, making their multiple award-winning performances available to everyone who couldn’t get a ticket in time to see them (and will most likely never be able to see them together again on stage). That is not to suggest in any way that the subsequent replacements were not also stellar; Euan Morton had just stepped into the role of King George III on the night I was there, mere inches from him, and I can assure you I was not disappointed.

Disney acquired the rights to the film for a reported $75 million. With the decision to switch to streaming it on the Disney+ service came the requirement that viewers must purchase a monthly subscription at $6.99 (which can be cancelled at any time), or an annual one at $69.99 (paid in advance), to watch. Because of the popularity of Hamilton, the expectation is that subscriptions will skyrocket, and, once purchased, subscribers will keep renewing, to stream Disney’s other offerings, in addition to binge-watching their main reason for joining, as many times as they, their families, and guests would like, for the single fee. Needless to say, if you were to return to the theater to see the show again (whenever that may be), you’d have to buy another ticket, as would everyone accompanying you, for considerably more than $6.99.

Movie cameras shooting from different vantage points around the stage and above it offer an assortment of perspectives, including close-ups of the individual actors, than are possible from the fixed location of your stationary seat in the theater. In addition, because the live-capture filming was done over three different performance dates, it could then be mixed and edited to give not just the best variety of viewing angles, but also the strongest deliveries of the cast’s acting, dancing, and singing. Of course the Hamilton movie was planned and filmed long before the coronavirus shutdown, so it would be impossible for other Broadway shows to follow suit now, no matter how financially and artistically successful it is; there are simply no shows to live-capture on Broadway at present.

What do we miss with the movie, and with the ongoing closure of Broadway? The excitement of being “in the room where it happened,” up-close-and-personal with the stars and other like-minded theatergoers, in the exhilarating reactive communal experience that is live art, cannot be replicated. There is nothing like it. It’s why I do what I do.

What we don’t miss by seeing Hamilton in any medium is the ingenious content of the show and the extraordinary talent of its creator and presenters. The acclaimed cast tells Miranda’s enthralling story of the man on the $10 bill, from his humble beginnings and his intelligence, hard work, and drive to achieve greatness, to his meteoric rise in the American Revolution; from his legendary accomplishments to his human flaws, the scandals that burned, and the conflicts that ultimately cost him his life. It’s not only educational, it’s universal and relatable, as is apparent in the cross-temporal mix of historical costumes and props with post-modern hip-hop and other current styles of music. It’s a musical that makes learning about our past relevant and fun, while teaching ever-important socio-political life-lessons and underscoring the power of art to make the connection between what happened then and what’s happening now. Personally, it inspired me to take my most recent vacation in January, before the pandemic hit hard in NYC, to the Caribbean islands of St. Kitts and Nevis, to visit Alexander Hamilton’s birthplace firsthand.

The bottom line is Hamilton is a work of unparalleled brilliance, whether on stage or screen; any opportunity to see it is a welcome one, especially during the ongoing Broadway hiatus necessitated by the coronavirus crisis. While the situation of viewing the movie on a TV or another small digital device is different than seeing it on a grand scale in a large theater, it offers some unique cinematic aspects at an affordable price, and the only chance you’ll have to enjoy the performances of the original cast. My advice: if you haven’t seen it yet – or even if you have – don’t miss it! I subscribed just for this, and I know I’ll be watching it again and again and again.