From an expert conversation about a Shakespearean classic to a series of three rarely produced period-pieces to a documentary drama about NYC’s front-line workers in the current coronavirus pandemic, Off-Broadway companies are offering a selection of fascinating programs this week that you can stream for free.

“I Am I” with Matthew Rauch – For the latest installment in Red Bull Theater’s RemarkaBULL Podversations series, Nathan Winkelstein, the company’s Associate Producer, hosts a remote discussion about Shakespeare’s tragic history play Richard III (written ca. 1593, and the second longest in his canon after Hamlet) with special guest Matthew Rauch. The Shakespearean actor and Red Bull regular, who performed the titular role of the villainous monarch under the direction of David Muse in the critically acclaimed 2019 production at DC’s Shakespeare Theater Company, will read passages from the play and offer his thoughts on the character, text, and evolution of The Bard’s oeuvre. A few members of the virtual audience, selected through an online submission form (due by Monday, July 6, 10 am), will also appear on the program to ask questions. The broadcast streams live on Monday, July 6, at 7:30 pm, on YouTube, or you can interact with posted comments by streaming through Facebook LIVE. 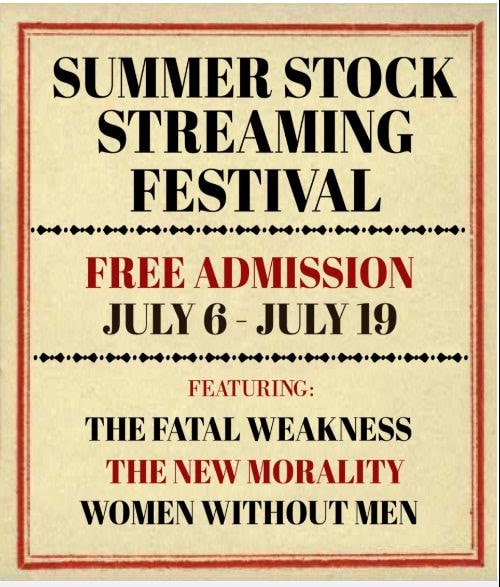 “Summer Stock Streaming Festival” – Mint Theater Company, known for its dedicated mission of giving new life to long-forgotten plays, is presenting three of its archival recordings – The Fatal Weakness, an American domestic dramedy by George Kelly; The New Morality, a high-brow British comedy by Harold Chapin; and Women Without Men, a suspenseful and acerbic Irish drama by Hazel Ellisin – in a new online festival beginning on Monday, July 6. Not only will the streamings offer viewers intimate broadcast experiences of these top-notch female-centric productions (according to Producing Artistic Director Jonathan Bank, the company has been using three high-definition cameras to create professionally shot, then edited, full-length videos of its live performances since 2013), but it will also put 30 actors and stage managers from the chosen plays back on the payroll during the ongoing COVID-19 hiatus of live theater. All three shows will be available from July 6-19, 2020, on the Mint website. To receive a password for the Mint’s free “Summer Stock Streaming Festival,” send an email to streaming@minttheater.org, with Mint in the subject line.

The Line – On Wednesday, July 8, The Public Theater will livestream the world premiere of its newly commissioned docudrama on the true experiences of real-life frontline medical workers in NYC during the COVID-19 pandemic. Created in quarantine by Jessica Blank and Erik Jensen, who wrote last season’s Coal Country (with its run at The Public cut short by the coronavirus shutdown), the “rapid-response” virtual play, written specifically for the digital stage, is constructed from the anonymous first-hand interviews the husband-and-wife team conducted with the city’s brave medical first-responders in the spring, as they battled to save lives in a system that was not prepared for the enormity of the national emergency. Directed by Blank, the remote cast features Santino Fontana, Arjun Gupta, John Ortiz, Alison Pill, Nicholas Pinnock, Jamey Sheridan, and Lorraine Toussaint, backed by original music by Aimee Mann. The Line will be available for free on The Public’s website and YouTube channel, beginning on Wednesday, July 8, at 7:30 pm, and will remain available through Tuesday, August 4, until 11:59 p.m.

If you want to explore a time-honored classic, some lesser-known works from the past, or a pressing issue of our present time, these Off-Broadway streaming selections will provide something of interest and value for everyone.