As health and safety concerns continue to make live theater productions with a live audience dicey at best, the DMV’s Dark Horse Theatre decided to find its own way to produce new content and deliver it digitally.

Knowing that theatergoers have been hungry for something new, Dark Horse, under the leadership of Natasha Parnian-Farms, commissioned an original work to be performed live before digital audiences then later made available for streaming in a film version. 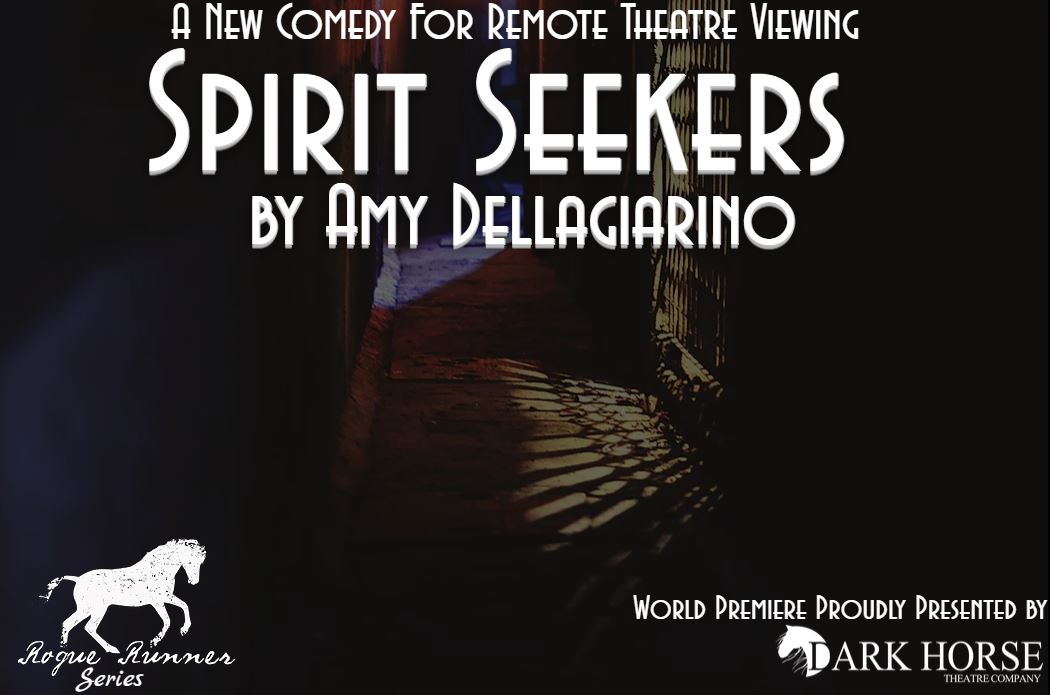 “From its inception, in-person contact has been essential at Dark Horse,” said Parnian-Farms. “We make sure to invite the audience into each production as much as possible. We keep our venues small (50 seats max) and close, with audience members never more than 10 to 15 feet from the action.

“The COVID pandemic really thwarted our essential work of direct audience contact. So now we had to adapt,” she added. “It felt inauthentic to our artistic integrity to take a show that the playwright intended to be performed as theatre in a theater and condense it into a video chat square.”

With COVID-19 still a disruption, what’s the way around either not performing or feeling inauthentic? For Dark Horse it was to commission a new play “that the playwright intended to be performed in a little video chat square,” said Parnian-Farms. She reached out to L.A. playwright Amy Dellagiarino, who has “been writing so many cool plays out of L.A. I asked her if she could write us something that she intends to be performed virtually. She loved the idea and had a short ‘video play’ (we’re not calling it theater) to us.”

Dellagiarino entitled her video play Spirit Seekers. Dark Horse will stream it both live on Facebook and Zoom and then available taped. Spirit Seekers is about an amateur group of ghost hunters that camps out in a haunted and infamous house only to end up encountering more than they bargained for.  It is a fast-paced comedy, running about 30 to 40 minutes, meant for online theater viewing. It is written “to have heightened reactions and a lot of fun hijinks,” said Dellagiriono.

“I was pretty excited to get this project from Dark Horse mainly because I thought ‘how would that work?’ It was such a fun puzzle—everyone’s clamoring for distraction and entertainment, but how do we use that interest in a way that isn’t exhausting?,” said Dellagiarino. “I’ve seen a lot of plays and readings being moved to online, but I haven’t seen a lot of work being done that is created specifically for being viewed online.

“That’s a different kind of work, and it’s meant to be consumed in a different kind of way,” added Dellagiarino. “I think that’s a challenge that we, as theater artists, absolutely have to explore if we want to keep serving our audiences, especially since it looks like this is just going to be the state of things in the theater for a while.”

Asked how writing for streaming is different from writing for a live theater production, Dellagiarino responded, “I didn’t want to make a play that was going to be running close to an hour—Zoom fatigue is a real thing and I know for me personally there was no way I would want to sit through that! I also didn’t want to make something that had the shadow of the pandemic in the background—I didn’t want the premise of this play to be ‘these characters have to interact remotely because COVID-19 is outside’—no thank you, that’s what’s on the news 24/7, I don’t need to be reminded of it.”

Dellagiarino went on to say, “Audiences can expect a funny yet challenging, 30- to 40-minute thrill ride, with some likely supernatural projectiles thrown in.” Spirit Seekers has four characters with “a fun, familiar way in which they talk to each other.”  And “it’s not just four faces staring at you for 30 minutes,” for there is a physicality to the characters and the performances.

The Spirit Seekers cast has four actors: three women and one man. There’s the fearless leader, Olivia (Arianné Warner), “who has the unenviable role of what is essentially herding cats,” noted Dellagiarino.  There is the researcher, a sarcastic Ensley (Audra Jacobs), who figures out which haunted building the group goes to, and the psychic Margaret (Arden DiManno), who is “their main connection to the spirit world and also a bit of a space cadet,” according to Dellagiarino. Director Parnian-Farms added that Margaret is also a “flower child” in her outlook. Finally there is Ted (Ken Gilfillan), the group’s techie with his own keys to the production.

Spirit Seekers from Dark Horse Theatre premieres live online on July 25, 2020, at 8 p.m.  The performance is to be filmed for later streaming. Tickets are available online in two tiers: one that is a free and another that includes a donation.