I want to carve out a new niche in the Bold New World of virtual online arts meetings. I want to become a Zoom critic!

Why? Because I have been forced to hone my facilitator skills with this ubiquitous new technology Monster. First as a facilitator and second as online educator, but most of all as a participant in what seems like an endless stream of invitations to Zoom in to diverse gatherings of locked-down “Creatives” who have a lot of valuable things to say!

I recently watched a roundtable hosted by Transformation Theatre about BIPOC (Black, Indigenous, People of Color) and the theater (you too can watch it here).

The discussion was obviously sparked by the Black Lives Matter movement and had the lead-in teaser of “The State of the Arts: How Do We Move Forward?” 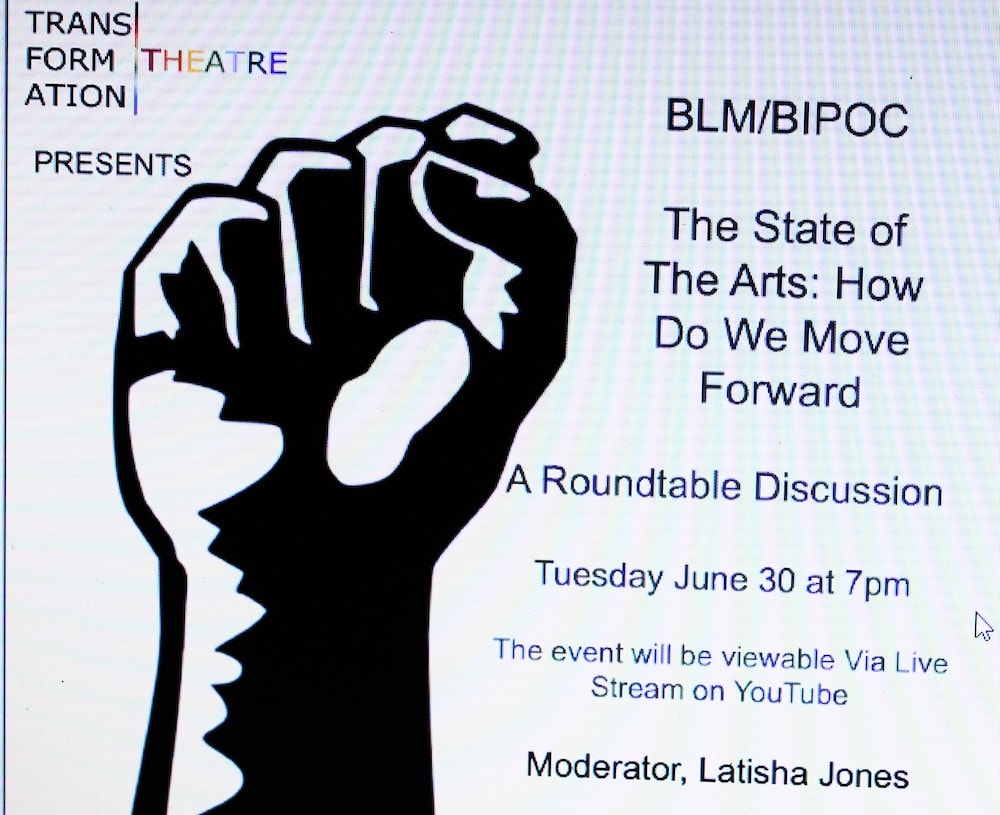 What followed was a verbal food fight of I believe 12 talking heads—couldn’t get them all on the screen at the same time—including several that I know from the local theater scene such as E. Faye Butler, Ari Roth, and Jennifer Nelson. It got started 10 minutes late and had two moderators, the first of which was a white male who did a terrible job of setting the table. But after a rocky start the discussion proved more than worth my while.

The second moderator was a young lady named Latisha Jones, who is described as a Literary Artist at The Sanctuaries, a website for artists-in-residence here in the DMV. She got off to a good start by asking a softball question about what brings each participant “Black joy”—which was a little awkward for my Jewish friend Ari Roth, who remained silent for over an hour when he finally shared that he was celebrating his 35th anniversary with a crab feast tonight!

Then she made the moderator’s fatal mistake of soapboxing into a long-drawn-out policy monologue about inside theater topics like “harm reduction” in the face of institutional racism.

Thank God for E. Faye Butler, who stole the show like it was the third act of Amen Corner by blowing up the misplaced notion of “color blind” casting:

“As the national chair of Actors’ Equity committee on diversity, that term is not in our language,” said Butler, stopping that discussion dead in its tracks. “No one is color blind. That is something that someone gave us, and it should not be in our language. It is OK to be ourselves.”

And even though my old friend Jennifer Nelson turned down my request to participate on a local DC Metro Theater Arts roundtable—she said she’s 71 years old—there she was as the sage voice of 50 years of “exhausting” experience keeping it real:

“I don’t always want to do shit about Black people. I was raised by teachers and educated Black people and it was not who I am. I did not want to be in a play that the primary Black character was a maid or helper!”

“We producers profit from trauma,” said Bobbitt, himself an unapologetically gay Black man. “Theater is inherently political. Marginalized people of color are the plot point of so much Black theater, and I have shied away from that.”

The Zoom meeting ran about an hour and 20 minutes and had too many talking heads and one too opinionated moderator who chewed up a lot of dialogue getting to her questions, but whoever put the program together was wise enough to invite E. Faye Butler, who everybody decided they wanted to have lunch with.

And of course she ended the meeting, in her white cat-eyed Diva glasses, with a classic E. Faye zinger: “I’m coming to DC in August for the March on Washington.”

E. Faye is always prepared and set the standard in her Chicago studio corner, as the other participants looked like they Zoomed in from their dorm room, with one very striking exception: Alex Levy from 1st Stage had a beautiful logo backdrop that set a standard that others should emulate, even though he had precious little face time as the straight white guy on the panel talking about Black theater.

What I have learned as a moderator is: Brief the panel on Zoom etiquette, by telling them to present their best image by using the background options; don’t read your email and look bored while other participants are sharing; and never overload the panel with too many talking heads!

I reached out to the moderator Carl Randolph, Producing Artistic Director of TransFormation Theatre. “I wanted to do something in response to the BLM protests that have been happening,” he indicated. “It was also important that the conversation wasn’t ‘one-sided.’ I’ve seen a lot of roundtables that only included African Americans. While there is benefit to those, I felt it was time for all representatives of the theaters to be talking.”

This new Zoom critic’s major takeaway was that during this dark theater period, Zoom discussions are filling a vital void in keeping the diverse parties in the creative community connected. Like a “hothouse” reading of a new play, there is a lot of room for improvement, but you have to air and share your dirty laundry.