For the second installment of its online 2020 summer season, Off-Broadway’s Irish Repertory Theatre is presenting an all-new third-time revival of Dublin-born playwright Conor McPherson’s award-winning work of 1997, The Weir. The current incarnation, following the show’s popular runs with the company in 2013 and 2015, was created specifically for the digital format and features the return of director Ciarán O’Reilly and actors from IRT’s previous acclaimed productions, all filmed remotely, but utilizing original theatrical design elements that far surpass the usual Zoom-box streaming. It captures, in virtual reality, a sense of time and place, an evocative and unsettling mood, and an intimate shared experience that are as gripping and impactful as viewers would expect in a live on-stage performance.

Combining the Irish traditions of drinking and socializing, storytelling and folklore, the narrative is set at a local pub in rural Ireland, where the bartender and a couple of the regulars – all three bachelors – are spending the evening. They are soon joined by a married friend, accompanying a female newcomer from Dublin, who has just rented an old house nearby. After a few rounds of drinks, the usual male bonding, banter, verbal sparring, and gossip take a turn towards the supernatural, as they tell tales about faeries, ghosts, and strange occurrences that they and others in the area have experienced along the path to the weir. The woman, who has been listening intently, then reveals a deeply personal and startling story of her own, which serves as an unexpected catharsis for the men.

Each member of the outstanding cast of five brings an authentic Irish accent (dialect coaching by Stephen Gabis) and a true-to-life personality to the characters, distinctive in outward demeanor and attitude but connected to one another by their inner heartrending loneliness. Dan Butler as Jack, a garage owner and mechanic, is a cantankerous embodiment of the Irish gift of gab, combative, berating, and sexist in his non-stop gibes at his drinking buddies, but using the tough exterior to cover his longtime pain and regrets. Tim Ruddy as Brendan, proprietor of the increasingly desolate pub, is, by contrast, much more amicable, quiet, and reserved; he is the only one of the group who doesn’t share an occult tale, while still conveying a haunting sadness as he serves up the drinks.

John Keating as Jack’s quick-smiling assistant Jim, also single and still living with and caring for his elderly mother, and Sean Gormley as Finbar, a more prosperous businessman who has boastfully bought up a good deal of property in the area and spends much of his time away from his wife, masterfully contribute to the peculiar and poignant camaraderie of the doleful and solitary men. And Amanda Quaid as Valerie is quiet, acquiescent, and attentive, until the outsider from the big city feels a melancholy connection to them and their stories, and shares her own devastating reason for leaving Dublin. It is a true and revelatory tale that has a palpable impact on her new-found kindred spirits.

The moving performances are supported by a transporting design from the company’s 2013 and 2015 productions, repurposed for the digital presentation and put to convincing use in O’Reilly’s keen direction. Though filmed apart, in isolation – a thematic and emotional parallel between the content of the play and the situation in the current pandemic – each of the actors appears in character-defining costume (by Leon Dobkowski), before a changing full-screen digital backdrop of the pub’s interior (original set by Charlie Corcoran, with lighting by Michael Gottlieb), as they believably move around the virtual space,  pass props (by Deirdre Brennan), and interact, and the gusting wind and tinkling bells outside enhance the play’s expressive tone  (sound design by M. Florian Staab; original sound by Drew Levy).

Viewing of this profoundly affecting work is free, but advance reservations are required and donations are welcome. Your event link will be emailed two hours before your selected performance begins. 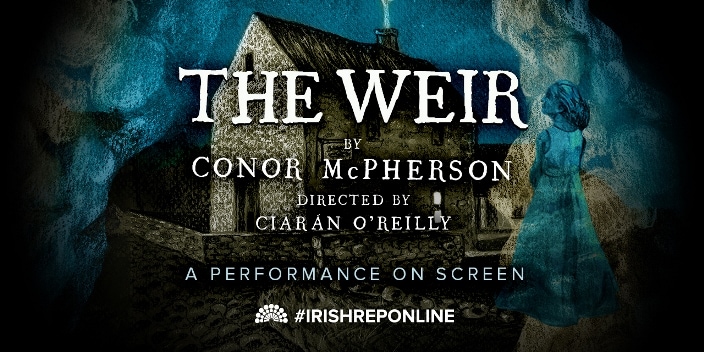