In 2017, when Andrew Goren, CEO and Founder of Harmony Helper, developed the new digital app to help vocalists with singing, rehearsing, and perfecting their harmonizing skills from the comfort of their own homes, little did he know how much more indispensable it would become to singers in 2020, in the time of coronavirus isolation. As a past performer with over a decade of experience in musical theater, and the head of a company that operates within the theater market, Goren has a unique inside perspective on both the usefulness and design of the app, which launched last October, with the pivotal help of Broadway star Rob McClure, who serves as Artistic Advisor.

I spoke with Andrew to get his background, insights, and vision on how he originated the invaluable digital tool, how the user experience has evolved since the COVID-19 shutdown, and how rehearsals and performances might continue to change in the future under the lingering impact of the pandemic.

Can you give our readers the backstory of what motivated you to create the app?

Andrew: My background is in theater and I did a lot of shows in Philadelphia and New York since the age of twelve. My first was A Christmas Carol at Philadelphia’s Walnut Street Theatre. I was so excited to see my name on the script, for the harmonies, but when we got to rehearsals, because of where the other actors were standing, I couldn’t hear the person I was supposed to be harmonizing with clearly – it was ‘the singer’s nightmare!’ When we got to dress rehearsal, the sound was completely different; at that point it was extremely loud, so again I almost felt like I couldn’t remember how to sing.

After that experience, I kept working with the Musical Director, who said to me, “With harmony, you either have it or you don’t.” I heard from other actors that they’d had the same problem I did, so I had the idea rolling around in my mind of how I could address that common issue. I began to develop the app, and then took it to BroadwayCon and Paper Mill Playhouse for beta testing.

What specifically did Rob, a Tony-nominated actor, contribute to the process?

He’s our Artistic Advisor. Rob and I originally met at the Arden Theatre in Philadelphia, where he was teaching a master class that I attended. I was so struck by him and his talent, and felt that we were the same type for casting, so I asked if he ever did any private lessons. He said yes, so I studied with him; and that’s when I told him about my plans for the app. Because he has so much real-world experience with his work on Broadway, Off-Broadway, and regional theater, he helped define the user experience. He was especially important in developing the five-step approach for learning and holding harmonies. And, a little bonus info: he also provided the voice for Mic, our company logo, in a promotional video where he walks users through the Harmony Helper experience. 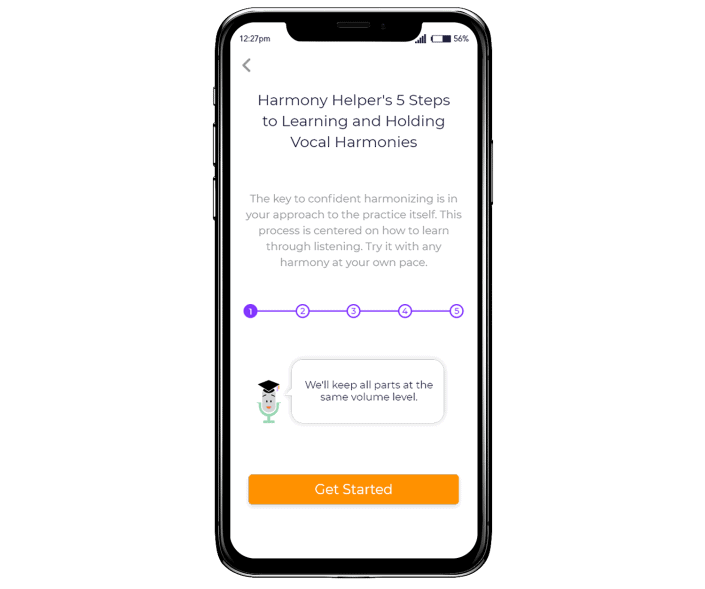 What feedback have you received from users since Harmony Helper was introduced last year?

We’ve received a lot of great, positive feedback. People who didn’t have the resources for private studio sessions or one-on-one lessons, and people who needed additional help outside of regular rehearsals, found it extremely valuable. We also heard from musical directors, who specifically wanted to use Harmony Helper for groups, so we’ve begun beta tests on that. Camp Broadway runs The Roger Rees Awards and holds an annual celebration to honor outstanding high-school musical students and programs in New York. They tested the beta version of the group sharing portal and all of the participants were able to learn their parts for the ceremony through Harmony Helper. This laid the groundwork for partnering with other virtual camps and groups. We enjoy doing work like this, we find it very rewarding, and are planning to launch the group sharing portal in the near future.

What are the increased advantages now of utilizing the app for singers, musical theater artists, coaches, and directors on indefinite hiatus from in-person rehearsals and shows?

There are a few advantages. One of the most obvious is that there’s not a lot of live theater now, but artists still need to prepare for tomorrow. We don’t know for certain when theaters are reopening, but it’s coming. Performers still need to practice, to learn, to keep up, and to be ready for their next performance, whenever it happens. Harmony Helper allows performers easy access to maintain their voices and skills during the shutdown. Plus, because a lot of performances are going online, Harmony Helper, as a digital app, also supports that kind of learning and preparation for virtual performances.

What do you foresee in terms of the future of live theater and the evolution of Harmony Helper?

Let me preface this by saying that I don’t have a crystal ball, and I know that every day things are changing. However, there are a few things I foresee happening. First, I believe the theater community will be resilient and bounce back. I also think that there will be a new and greater appreciation for the performing arts. Since quarantine, people are beginning to realize how much they miss live performances, how important they are to their lives and to the economy, how many hundreds of people are involved at different levels and capacities in a single show. Although nothing can replace the live theater experience, we will begin to see more innovations like VR experiences and expanded access on digital media; Hamilton on Disney+ is a prime example. I think we will continue to see the expansion of virtual performances even after live theater returns, because it gives access to more people around the world, not just those who are fortunate enough to be able to go to a Broadway show in person. And that also goes for learning. Someone in Wisconsin can now study with a theater artist in NYC, via their own digital devices.

Thanks, Andrew, for sharing your expertise and for keeping the voices of singers and theater artists strong and active with Harmony Helper!

To download the app, go to Google Play or the Apple App Store. Subscriptions are available for $4.99/month or $49.99/year, preceded by a one-week free trial period. For more information, visit the Harmony Helper website.