Cabaret sensation Kim David Smith just released his first concert album Live at Joe’s Pub earlier this month, recorded during one of his recurrent sold-out performance at the iconic downtown nightclub at The Public Theater. Unlike his previous electro-pop albums Nova (2013) and Supernova (2015), both set to a dance-club beat, this latest set list features Smith’s preeminent taste for Kurt Weill, Marlene Dietrich, and the louche theatrical stylings of 1920s Berlin in the time of the Weimar Republic, seamlessly meshed with post-modern pop hits by The Supremes, Madonna, Toto Coelo, and others, on favorites from a decade of the NYC-based Australian-born performer’s provocative award-winning cabaret repertoire.

Smith’s most recent shows include Mostly Marlene (March 2020), A Wery Weimar Christmas (December 2019), his acclaimed Morphium Kabarett (which toured Australia and played a variety of New York venues in 2015-16), and Kim Sings Kylie (his tribute to fellow Aussie Kylie Minogue, which he premiered in June 2019). In addition to his popular singing and cabaret appearances (at Joe’s Pub, Club Cumming, Pangea, Feinstein’s/54 Below, and more), Smith has enjoyed a noted career as a model, and has starred, to excellent reviews, in regional summer-stock productions of Oscar Wilde’s Salomé at the Provincetown Theater and as the Emcee in Hunter Foster’s production of Cabaret at the Cape Playhouse.

Kim was kind enough to make the time to talk to me on a busy day, for a fabulous conversation about his new release, his signature style, and the driving influences that shaped his music.

Kim: Physically, my earliest memory is of dancing around the living room when I was about five years old, doing high kicks and splits. I also used to do lots and lots of drawings of witches and mermaids, and I was completely obsessed with Dorothy from The Wizard of Oz. My Mom would wait outside my bedroom and I would come out as Dorothy, or Mary Poppins, walking on my toes and telling her I was wearing my “skokes” – a word I made up for high heels. When art is in your spirit, I think you know it’s there, even at the age of five.

When did you discover your taste for Weimar-era cabaret?

I grew up in Traralgon, a country town in Australia, with a paper mill and power plant industry; there weren’t really any cultural activities or theater there. But in my teens, I picked up the tape of Bob Fosse’s Cabaret and kept rewinding it to watch “Mein Herr” again and again and again. I was about fifteen at the time, and I wanted to be Sally Bowles singing it! So I started doing research on the show and the period, as best I could – it was around 1998, so we didn’t have as much internet as we do now. Then my Dad gave me a Marlene Dietrich autobiography and I started singing her songs, which I loved, so those were the origins of my cabaret act.

Why did you decide to leave your native Australia and relocate to NYC?

I had just graduated with a BA in Musical Theater and I was told by our head of acting, Kim Durban, that you have to create your own content, to make your own work, so I did my first show – called Kim Smith Is Madly Adored! – at Melbourne’s Butterfly Club. Making my own stuff was going okay, but I felt like I needed to go somewhere else, somewhere bigger, and NYC was a no-brainer; it’s really the cabaret center of the world now.

What do you love most about playing at Joe’s Pub?

As an artist, it has a feeling of family and of being at home. I loved it before the renovation, and I love it after the renovation. It’s elegant, comfortable, and welcoming, and it’s also JOE’S PUB AT THE PUBLIC!!! But with that sense of family, it has a gorgeous lovely feeling, almost like being in a living room, so it makes me feel good about sharing my art. And if I feel happy and comfortable there, I can make the audience feel the same way. Plus it’s so cool, so that’s taken care of; I don’t have to try to be cool, which I’m not – I really just feel I’m a big nerd! [A point on which I adamantly disagree with Kim – he is most definitely cool!]

Were you involved in the production process of the live album beyond the recorded concert?

I was very hands-on with it. It was my managers at The Katz Company, Jeremy Katz and Clay Mills, who suggested I do it, following my two previous studio albums, and I was ready – especially since I was transformed by listening to Eartha Kitt’s live albums from the ‘70s. I have a great relationship with my music director Tracy Stark, so I knew it was the right time, with her as a part of it. I worked really hard on the record in collaboration with Tracy and Daniel Sanint at Flux Studios NYC on the producing and mastering of the voice, piano, bass, back-up vocals, and audience response (which I consider to be the most important instrument on the live album). When that was done, I worked with Dan Fortune of Fortune Creative to promote it – we’ve done projects together before and he’s a great friend. So I was involved in every step of the process, which was time-consuming and expensive – I guess that’s why there aren’t many artists doing live cabaret albums – but it was a great experience and a labor of love.

Is there one particular song that you most look forward to performing and that best expresses who you are?

“Jonny, Wenn Du Geburtstag Hast?” It’s slinky and silly. I also love “Ich Bin Ein Vamp,” which flows into “Dracula’s Tango.” My Mom was an aerobics instructor in the 1980s, and it was one of her workout tapes, so it’s nostalgic for me, and it honors her. It’s creepy and fun and satisfying to me on at least seven levels!

You’ve been called whimsical, wicked, and slyly subversive, the “Bowie of cabaret” and the “male Marlene Dietrich.” How would you describe yourself?

Ooooh, that’s hard! People have been picking up on the signals I’ve been putting out, so it was very flattering to be compared to Marlene Dietrich – not that anyone could compare to her. I think I would say that I’m a big gigglesome cabaret nerd. I love having fun and I love having a giggle!

What are you most looking forward to when the coronavirus quarantine is over?

Thanks, Kim, for sharing your background and giving our readers some personal insights into your music. It was a pleasure to meet you remotely, and I can’t wait, either, for you to perform in person once the clubs are open again! 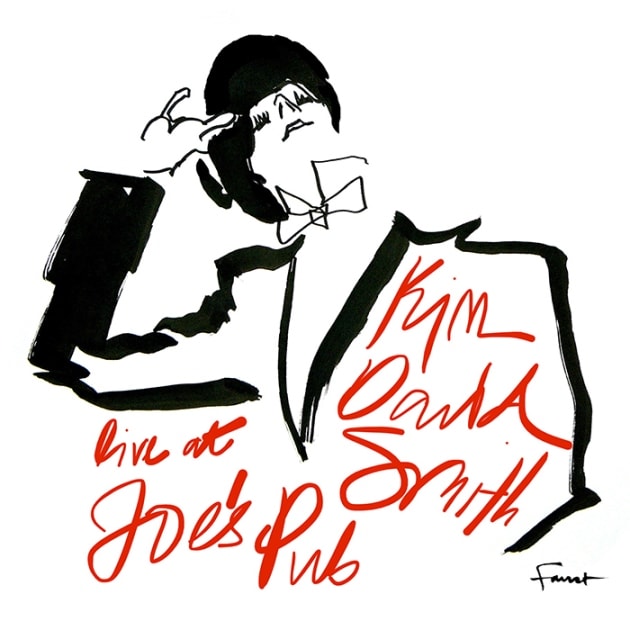 Kim David Smith: Live at Joe’s Pub  is available on digital and streaming platforms, and on CD.