Two compelling mid-week offerings with weighty themes take different approaches – one profoundly dramatic, one bitingly comic – to deliver their timely messages of the need for socio-political change and serious self-examination. Neither one should be missed.

#WhileWeBreathe: A Night of Creative Protest – Created by Brian Moreland and Arvind Ethan David, the premiere livestream event will feature eleven new short works presented by an all-star team of BIPOC playwrights, directors, artists, and allies from the stage and screen with a dedicated mission of ending institutionalized racism, economic injustice, and police brutality in both the world and the entertainment industry. Basing their name on the haunting cry “I can’t breathe” – the agonizing dying words of George Floyd and Eric Garner – the activist group of storytellers is using their platform and their breath to give voice to the much-needed call for truth, awareness, empowerment, empathy, and change. The illustrious and deeply committed roster of performers includes Patina Miller, Byran Terrell Clark, Lynn Whitfield, Michele Shay, Will Swenson, and many more, with original music provided by Segun Akinola. This momentous must-see program debuts at 9 pm on Wednesday, July 29, on YouTube. Viewing is free, but all donations will benefit the NAACP Legal Defense and Educational Fund, Inc. The Bail Project, Black Organizing for Leadership and Dignity (BOLD), BYP100 Education Fund, Forced Trajectory Project (FTP), The Justice Committee, and SONG. 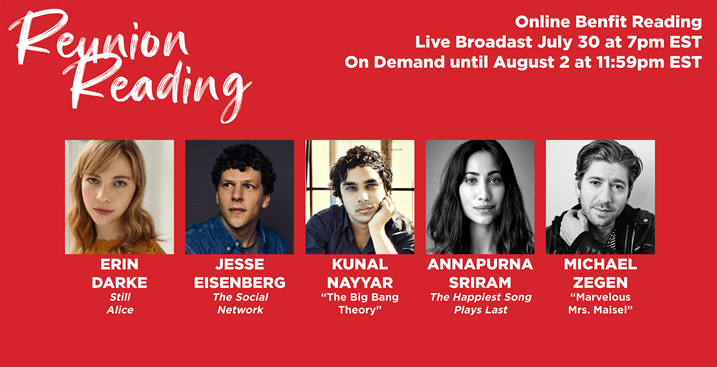 The Spoils – Off-Broadway’s The New Group reunites the original cast of actor/writer Jesse Eisenberg’s third play, which premiered in the company’s inaugural season at the Pershing Square Signature Center in 2015, for a virtual reading on Thursday, July 30, at 7 pm. The dark and probing comedy explores the issues of American privilege and toxic masculinity through the story of Ben, an obnoxious and neurotic, insidiously racist and misogynist, spoiled rich Millennial, whose narcissism and self-loathing drive him to bully his Nepalese roommate and to destroy the romantic relationship of his former grade-school crush (while sharing his adult-themed juvenile fantasies and engaging in ongoing sexual harassment). Starring as the flawed and dislikable lead character, Eisenberg is joined remotely in the caustic humor by TV favorites Kunal Nayyar, Erin Darke, Annapurna Sriram, and Michael Zegen. For tickets, go online; a link with instructions and a password to access the broadcast (which will be available for viewing through 11:59 pm, Sunday, August 2) will be emailed on the day of the reading. 10% of the proceeds from ticket sales will benefit the Immigrant Freelance Artists for Theatre Fund initiative of the See Lighting Foundation – an organization founded by Filipino lighting designer Cha See, committed to supporting immigrant theater artists and designers during the global pandemic.