Racial unrest and violent protests in the streets. Social division and a nation on the verge of collapse. A nascent social movement confronting racial injustice and police brutality. Internal family and external community tensions fueled by differing political perspectives.

Did you think I was talking about the Black Lives Matter Movement, social upheaval and street protests in America following the police killing of George Floyd? Well, no—the year is 1968. And in Tears of the Soul, a virtual production by Global Online in partnership with the AngelWing Project, we are forced to reckon with our current social issues through the lens of history repeating itself.

The timeline in Tears of the Soul is the two months and four days during the sanitation workers strike in Memphis, TN. There’s a war raging in Viet Nam. Black soldiers dying on the battlefield are still being buried in segregated cemeteries back home. The Black Panther movement questions whether nonviolent protest makes any sense. The leader of the Civil Rights Movement, a messianic preacher of nonviolence, dies a violent death on the balcony of a Memphis hotel.

In the midst of these turbulent times, Fred Barnes, a striking Memphis sanitation worker and protest leader, claims his manhood in a society that has long denied it. He’s head of a strong Black family that is coming apart from internal generational family tensions and external social injustice and chaos.

Vivian Barnes, Fred’s strong-willed wife, tries to hold onto sense and sensibility in the family while three young adult children struggle for clarity about their own identities. A nation comes to terms with who it is and what it wants to become. Family friends encounter their own personal and interpersonal failings and breakdowns.

President and Founder Angela Wilson started the AngelWing Project, a nonprofit performing arts organization, in 2015 and dedicated it to celebrating diversity, specifically targeting underserved BIPOC communities. Global Online and AWP recently produced the virtual version of Tears of the Soul as a fundraiser, now streaming on Facebook and YouTube.

A Zoom gallery screen shot shifts between appearing and disappearing characters. It takes a minute to get used to the talking heads. An ensemble of 12 actors not only has to develop their characters but also create mood and propel the play’s narrative without any staging whatsoever. Staging could have added movement and prevented the potential boredom of looking in the same spot at a static background for a two-hour play. But this is one of the inevitable challenges of a virtual production.

However, a lively and entertainingly strong script with a wonderful ensemble of a dozen terrific actors makes this Zoom-like theatrical experience work as successfully as it does. Also, actual graphic footage from the sanitation workers strike and other filmage from the turbulent ’60s—including police crowd assaults and the assassination of Rev. Martin Luther King—and ’60s background music helped to distract the singular focus of the gallery headshot set-up. 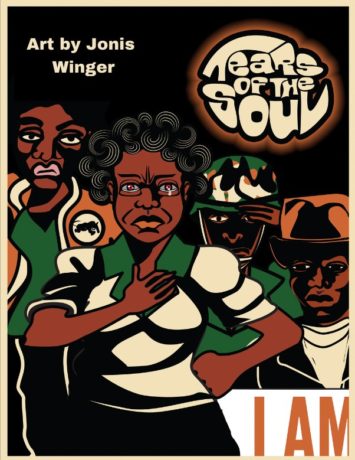 Feisty characterizations of ordinary men and women and soulful humor in Tears of the Soul are very relatable and great fun to watch despite the storyline’s heavy Civil Rights themes. Wilson does a phenomenal job of adding levity while creating a docu-play about difficult, fictionalized family and community relationships during a historically real moment. The explosive climax creates resolution that’s a believable catalyst for keeping it all moving forward.

Tears of the Soul offers up a simple solution to the complex problems that are creating the breakdown in family relationships and social unrest today—simply listening to one another. The singular message of this dynamic production is that the power of communicating during times of crises, respecting our shared human experience, and the similarity of our everyday challenges give hope for the future.

Tears of the Soul: A Virtual Production by Global Online in Partnership with the AngelWing Project will be available for viewing in recorded form until August 22, 2020, on YouTube and FaceBook. To donate, click here.