Among this week’s top livestreams from New York are three different genres of new musical offerings – a short musical narrative, a thematic song cycle, and a cabaret-style concert – that make their debuts on Thursday and Saturday. And though two of my three picks are scheduled for Saturday night, you don’t have to choose one and miss the other; their go-live times and running length allow you to enjoy both on the same evening.

May Day – As part of its “Play at Home” series, created to keep theater alive, artists employed, and audiences entertained during the COVID-19 shutdown, NewYorkRep has commissioned a new ten-minute mini-musical by multi-award-winning collaborators Melissa Li and Kit Yan. Inspired by the 2018 false emergency missile alert set off in Hawaii, and referencing the World War II attack on Pearl Harbor in 1941, the real-time short story focuses on two 30-something friends from high school – one non-binary and one cisgender – who have just reconnected and must decide what to do when they receive the terrifying message that there are only ten only minutes left till impact. Directed by NewYorkRep’s Producing Artistic Director Markus Potter, the all-star cast features Marc delaCruz (Hamilton), Tony Award winner Ruthie Ann Miles (The King and I), Hennessy (Best FringeNYC Actor Overall for Ampersand), and Catherine Ricafort (SpongeBob SquarePants). To attend the Zoom reading on Thursday, August 13, at 6 pm, send an email to gm@newyorkrep.org in advance to receive the necessary link. The script is also available free of charge for download and staging from the socially distant safety of your own home, and you can listen to a preview of the titular song, performed by delaCruz, here.

Different Stars: A Reckoning with Time, Trauma and Circumstance – In this world-premiere themed song cycle for four voices, Bronx-based queer composer,  lyricist, and librettist Karl Saint Lucy expresses the emotional impact and memories triggered by artifacts from a haunting first relationship and breakup in 2011. Co-produced with ChamberQUEER, (highlighting queer artists and composers, historically under-represented in classical music), the condensed 40-minute livestream version, featuring twelve of the original 40 songs and set in our current time of pandemic isolation, will debut on YouTube on Saturday, August 15, at 7:00 pm, as a benefit for QORDS (a North Carolina music camp for LGBTQIA+ youth). According to Saint Lucy, “The relationship I had with the man who inspired this cycle – conceived in the format of Jason Robert Brown’s Songs for a New World or Schubert’s Winterreise – was rooted very much in our mutual love for both Joni Mitchell and Rufus Wainwright, who has also done some excellent treatments of sonnets by Shakespeare” (referenced in the content and title of Different Stars). Other eclectic influences for the expressive and intimate work, directed by Raquel Cion and performed remotely by James Jackson, Jr., Danielle Buonaiuto, Victoria Huston-Elem, and Saint Lucy (in the role of the ex), include the music of Joan As Police Woman and Leonard Bernstein. 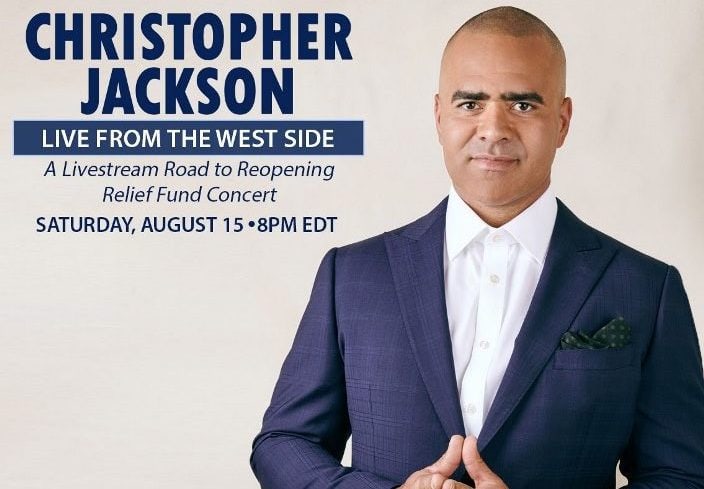 Christopher Jackson: Live from the West Side – Famed for his role as George Washington in the original Broadway cast of Hamilton on both stage and screen, Tony Award-nominated actor and Grammy and Emmy Award-winning singer, songwriter, and composer Christopher Jackson will perform live from NYC’s New World Stages in a special online event on Saturday, August 15, beginning at 8 pm. The one-night-only “Road to Reopening Relief Fund Concert” (accessible for 72 hours after the livestream) will feature Jackson singing Broadway show tunes, pop hits, and original songs with his live band, and sharing personal stories from his time in Lin-Manuel Miranda’s blockbuster hits Hamilton, In the Heights, and Freestyle Love Supreme. Tickets are available exclusively through a group of non-profit regional performing arts companies (including the Kimmel Center for the Performing Arts in Philadelphia), to benefit their respective missions and operations, and to help them to survive the pandemic. Access to this event is by donation of $40 or more between now and August 14, 12 pm; a link to the livestream will be sent in a separate email on that date. In addition to enjoying the concert and anecdotes, viewers will also have the opportunity to text their questions to Chris in real time.

Be sure to mark your calendars and submit your RSVPs ahead, so you don’t miss out on this great variety of shows and acclaimed talents coming to you online later this week!