August 26, 2020, marks the centennial of the ratification of the 19th Amendment to the US Constitution, giving women the right to vote. To commemorate the momentous anniversary, special events and performances, and the unveiling of a groundbreaking monument in Central Park, are scheduled for this month. 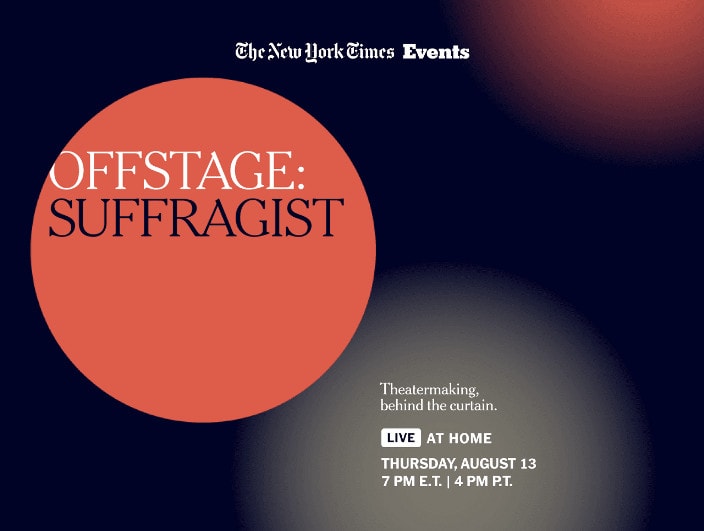 Offstage: Suffragist – The second episode of Offstage – The New York Times’ new digital series about theater-making during the pandemic – goes behind the scenes of the upcoming musical Suffragist (which was due to premiere this fall, but is postponed due to the COVID-19 pandemic) for an evening of examination, discussion, and song about the Women’s Suffrage Movement and its ongoing impact. Times narrative projects editor Veronica Chambers will lead an in-depth conversation with composer Shaina Taub, director Leigh Silverman, and scenic designer Mimi Lien, and theater reporter Michael Paulson will discuss the interrupted development of the production, the experience of preparing for the show, and how it shaped their current perspectives with members of the cast (including Jenn Colella, Nikki M. James, and Kuhoo Verma). The broadcast will also debut two songs from the work-in-progress, with the entire cast singing the blockbuster ballad “How Long” and Tony winner James, who portrays Ida B. Wells (investigative journalist, educator, leader in the early civil rights movement, and co-founders of the NAACP), performing her solo “Wait My Turn.” The free event plays on Thursday, August 13, at 7 pm. To register, go online; login details will be provided upon receipt of your RSVP. 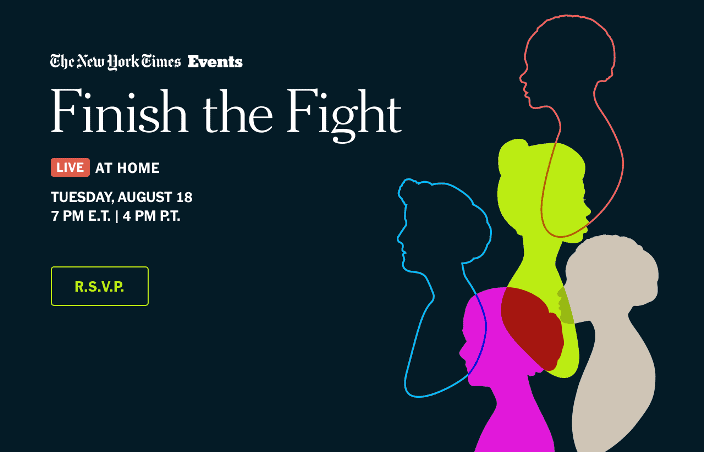 Finish the Fight – The New York Times continues its celebration of women’s suffrage with the world premiere of an original virtual play honoring the unsung heroes of the movement, who laid the foundation in the continuing battle for gender equality. Based on its new publication Finish the Fight!: The Brave and Revolutionary Women Who Fought for the Right to Vote by Veronica Chambers and the Times staff, the innovative theatrical performance, adapted by playwright Ming Peiffer and director Whitney White from the book’s actual events and biographies, imagines scenes and conversations among five diverse women – Black, Latinx, Indigenous, and Immigrant – to tell their untold stories and little-recognized historic accomplishments. Harriett D. Foy, Zora Howard, Q’orianka Kilcher, Leah Lewis, and Chelsea Rendon star respectively as Mary McLeod Bethune, Frances Ellen Watkins Harper, Zitkála-Šá, Mabel Ping-Hua Lee, and Jovita Idár – the tireless, tenacious, and brilliant trailblazers who had a significant role in securing the vote for all American women. The show, livestreaming on Tuesday, August 18, at 7 pm, is free for all to attend; a subscription is not required. Access details are shared upon RSVP confirmation and on the day of the event.

Talking Statues – An all-star multi-award-winning cast of Jane Alexander, Viola Davis, America Ferrera, Rita Moreno, Zoe Saldana, and Meryl Streep give voice, in English and Spanish, to the statues of Sojourner Truth, Susan B. Anthony, and Elizabeth Cady Stanton, the Women’s Rights Pioneers (and all three New Yorkers) depicted in Meredith Bergmann’s historic monument, set to be unveiled on Wednesday, August 26, on the centenary of the passage of the 19th Amendment. The first in Central Park’s 167-year history to depict real-life women, the sculpture was commissioned and funded by Monumental Women – an all-volunteer non-profit organization founded in 2014, with the initial goal of securing its creation and public placement, to educate viewers about women’s history. It is strategically located at the heart of the Park, along the famed Literary Walk, where it can be conveniently seen by 42 million annual visitors and heard by scanning a QR code on a smart-device or downloading the “Talking Statues” app (a project begun by documentary filmmaker David Peter Fox in Copenhagen in 2013) on a mobile device. Scriptwriter Joanne Parrent conceived the narration as a conversation based on the speeches and writings of Truth, Stanton, and Anthony (the 200th anniversary of whose birth is also this year), shown working together, respectively speaking, writing, and organizing, to advance their cause of justice and equality for women (though none lived long enough to see it happen). To learn more, visit the website.

Kudos to the organizations and artists involved in celebrating the women who fought so hard to secure our right to vote. We, too, can honor them by using it in this crucial election year.