Deep in the woods of rural Connecticut lies a monolithic Victorian mansion, the St. Vedastus Academy for Misguided Teens, a refuge for the newly violent, mildly sinister, and willfully corrupt. Nil is at least two of these things, and even in the eyes of more deviant classmates, suffers social death for it. When schoolmate Harrison discovers a seemingly bottomless pit in the forest floor, Nil sees an opportunity to claw to the top of the heap. But a strange compulsion begins to threaten their plans, and all the while the pit begins to grow larger and larger and larger, threatening to swallow them all. ZERO is a narrated tale of the inexplicable and the unspeakable, a darkly comedic allegory about the relationship between addiction and empathy, the danger of simple solutions, and whether “nothing” actually exists anyway. 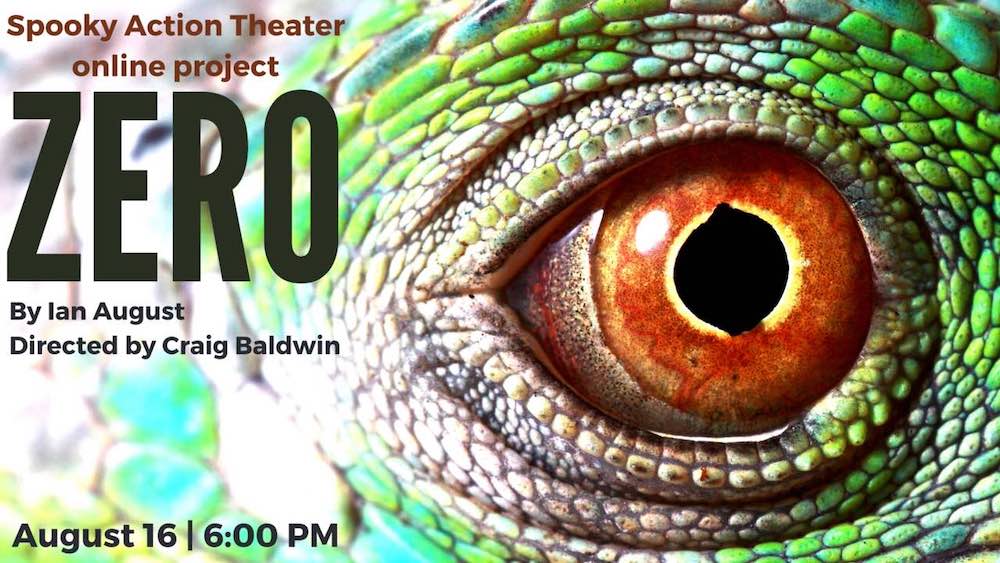 Zero will be livestreamed August 16, 2020, at 6 p.m. on Spooky Action Theater’s YouTube channel  To register for a free link, click here. (Be advised that Zero contains references to self-harm and sexual violence.)

Roberta: When did you start writing Zero?

Ian: I began writing Zero in December of 2018. I love magic realism (I particularly love magic realism on stage), and I had been toying with the idea of a bottomless pit in a few other, less successful projects. I was also interested in writing a narrated piece—my first full-length play was a narrated play, and I was eager to revisit that convention in a different way.

The play went through a number of drafts early on—I struggled with the tone of the piece. Every successive draft felt like it was veering towards YA theater—and even though the play is presented through the eyes of teens, I very much wanted to resist that. A solution presented itself through music; each day, prior to writing, I listened to certain songs that helped establish the mood of the piece in my head—songs by Green Day, Panic! at the Disco, and My Chemical Romance. Audiences who are familiar with these bands will sense their influence in Zero pretty strongly.

What was your main inspiration?

Inspiration comes from a number of different places, and so I wouldn’t say there is one main source. I was interested in exploring sociopathy, addiction, the marginalization of queer people, of young people, of people with various mental illnesses. I was interested in exploring teen angst, queer rage, betrayal, and forgiveness. Empathy. There’s a lot in this play about empathy, about learning to see the humanity in others. It’s the primary journey Nil takes. We live in a society in which people are abandoning empathy in favor of their own self-interests; it’s no coincidence that this theme is so prominent in this play.

You currently live in a boarding school. How has this environment inspired you to write a play set in a reform school?

Ha ha! I live and work with teens—well, under normal circumstances, I am the spouse of a Head of Dorm at a boarding school. There are pretty extreme differences between boarding schools and reform schools, but the sense of insularity that one gets from being a part of a closed community can be thought of as similar. The reform school tropes that Zero is playing on are similar to many of the boarding school tropes that we’ve seen in literature and film. At one point, Nil even refers to the school as Hogwarts for messed-up muggles. But I will admit that there is a forced maturity—there is an over-eagerness to grow up that I recognize in the students I work with that also surfaces in the characters of Zero.

How do you hope audiences will respond to Zero?

Zero is a challenging play. It deals with difficult topics including sexual assault, self-harm, mental illness, addictive behavior, violence, domestic abuse—but it addresses these topics in a way that is artful and (I hope) impactful. I hope audiences will consider these things as they watch the show, and come out the other side having experienced something meaningful and satisfying.

Is this the first time the play will be read on Zoom? How do you see this new platform for theater during COVID-19?

This is the first time the play will be presented virtually—and I’m very excited to see how audiences respond! Our stalwart director, Craig Baldwin, and the fantastic team at Spooky Action are putting together an experience that will be unlike any Zoom reading out there. I can’t wait to see how it all comes together!

How do you think the pandemic lockdown will influence the theater of the future?

I miss the theater—I miss being in a space with actors and working through a play—but I can’t help feeling like there’s an opportunity here to explore technology’s relationship with theater in a really healthy way. I’m hoping that relationship continues to be explored—even after we have a vaccine, even after we are living lives that are similar to the ones we led before the pandemic. The future of theater is going to be more diverse, more inclusive, and more innovative than ever before. And I’m very excited to be a part of that future.