While Broadway itself is still dark, Bristol Riverside Theatre, in Bucks County, PA, brings Broadway into your home for this year’s virtual Broadway Summer Spectacular. The all-new pre-recorded online concert closes the company’s 25th annual Summer Music Fest on September 2, 4, and 6, with a huge celebration of the music of Broadway – performed by two of its stars and two local BRT favorites – including songs by Stephen Sondheim, Richard Rodgers, and George Gershwin.

Along with popular BRT alumni Keith Spencer (who, to the delight of fans, has appeared in previous Summer Music Fest shows) and Jessica Wagner (who recently toured North America with The Phantom of the Opera), this final digital event of the summer season will feature Broadway’s Telly Leung (Aladdin; Godspell) in his debut with the theater, and Derrick Cobey (Kiss Me Kate; The Scottsboro Boys), returning to BRT following his acclaimed on-stage appearances there in Ragtime and Jesus Christ Superstar. Recorded remotely from their individual locations, the cast is slated to perform solos from Carousel, Fiddler on the Roof, Aladdin, Kiss Me Kate, Guys and Dolls, Company, The Secret Garden, My One and Only, and other top Broadway hits.

“We wanted to find a way to keep a connection to our audiences,” said BRT Artistic Director Keith Baker. “I hope audiences continue to enjoy our Summer Music Fest – this time from the comforts of wherever they are. The show must go on and we can’t thank everyone enough for their ongoing support of our work.” Baker, who hosts the series, is also the show’s Music Director, Conductor, and Keyboardist (with BRT Concert Band members Robert Garguillo on bass, Kathy Goff on percussion, Neil Nemetz on guitar, Claudia Pellegrini on violin).

Through the experience of presenting its first digital concert earlier this season, the company learned a lot about technology and subsequently shifted from Zoom to YouTube. “It’s essentially a new frontier of concert-making and the learning curve has been steep.” said Ken Kaissar, BRT Co-Producing Director. “We learn more per day doing this than we normally learn per year making theater. I think the most exciting thing to discover has not been technical, but rather that it really is possible to create shared live experiences this way.” Adding their skills to the virtual concert event are six-time Emmy Award-winner Habib Azar, who serves as the Broadcast Director and Editor; Technical Director Hiram McLaren Becker; BRT Resident Costume Designer Linda B. Stockton; Master Electrician Charles S. Reece; and Audio Engineer Brett Pearson.

Cobey was also well prepared for the remote online show. “At the beginning of the pandemic,” Derrick told me, “I thought there would be a lot of virtual programming going on, and I bought the necessary professional equipment because I wanted my performances to be clean. So when the Broadway Summer Spectacular came up, I was all set to do it at my place.” He explained that “the five-piece band went to the theater, in masks and observing proper protocol, to record the music together, so we would have real, full back-up. BRT sent me the track, I put on my headphones, sang into my mic, recorded it, and sent it to them. Then they put it together, did the editing and mixing, and the result is technically much cleaner than if we had just done it as a livestream.” He joked about doing “so many takes at home,” because he would notice “random stuff in the background, like a towel hanging over a chair,” and about choosing to use his own clothes, instead of having Stockton send him a costume. “But when I saw those pants I was wearing in the tape, we cropped it!”

For Derrick – who performs George Gershwin’s “Kicking the Clouds Away” from My One and Only and Stephen Sondheim’s “Being Alive” from Company – the absence of a live audience and interactions with castmates makes for a very different experience. “I miss the gathering, sharing the same moment, breathing the same air, together in the same room. Feeding off of each other and sharing each other’s energy is so inspirational.” But he also feels that returning to BRT is like going back to a family. “I’ve had a good relationship there for the past four to five years, so I feel like they get me, they know my style, my voice, my tempo. Plus the fact that they’re doing something during the pandemic shutdown of Broadway, they keep on working, is keeping my mind going and getting me to think creatively, because the focus is not the same as with a live show; I’m singing, and I’m learning something new. And it’s great to be appearing virtually with Telly Leung. We did Jesus Christ Superstar together in Sacramento in 2004, so we go way back!”

In addition to his longtime connection with Derrick, Telly (a native New Yorker) is also excited to be working on the concert with other old friends from his college days at Carnegie Mellon University in Pittsburgh, where he graduated in 2002. “I went to school with Amy and Ken Kaisser, who are now Co-Producing Directors at BRT, and Habib, who is working the technical side of the broadcast, so it’s great to collaborate with them on this. I honestly feel that it’s like a family, there’s a history with the people there, even though it’s my first time performing with BRT. I’ve enjoyed working with Keith Baker, as well; he’s an institution there. And I’m excited to be doing “Proud of Your Boy” from Aladdin, and a medley of the songs from West Side Story, which I love, and did when I was in high school. I’m very happy to be a part of it.”

Telly did note that there were some challenges for him in recording remotely. “When performing live, you don’t have to be your own sound designer, editor, and lighting designer, or do it all in the space of a tiny 500-square-foot apartment in midtown Manhattan! With this format you have to figure it all out on your own. But it forced me to pick up some technical skills I wouldn’t have had from doing live theater. And though we all miss it – and I say this in all caps: NOTHING REPLACES THE LIVE THEATER EXPERIENCE and sharing the same air – I think that BRT is doing such a wonderful positive pivot in creating opportunities for the hungry audiences and for us, the performers. Everyone should be doing that.”

The greatest reward Telly finds in all of it “is that it’s accessible to everyone. Even though it was forced by the pandemic, it’s so awesome that someone in Japan can watch the show, and the whole world can have access to share in the Broadway experience.” Derrick adds, “I think the biggest benefit of doing this online concert is that it reminds us all that the arts, which are so important, aren’t going anywhere. Using this kind of platform gives us the hope and the comfort in knowing that we will be back together to celebrate them again.” 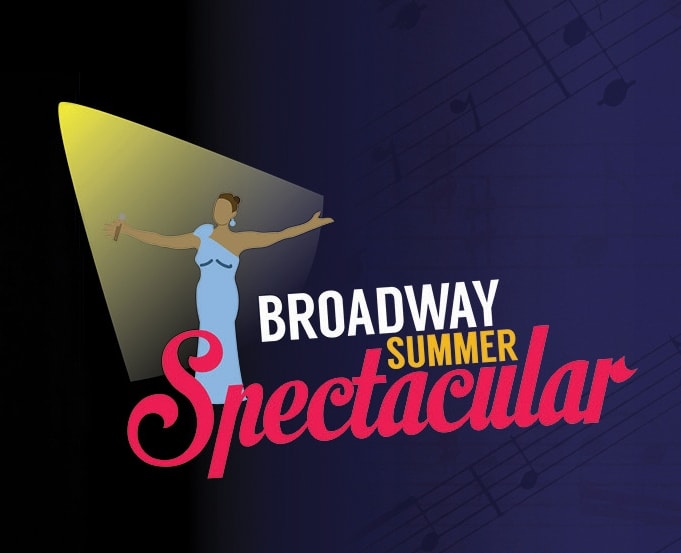 Broadway Summer Spectacular plays Wednesday, September 2, at 7 pm, Friday, September 4, at 7 pm, and Sunday, September 6, at 3 pm, on Bristol Riverside Theatre’s YouTube page. Tickets are priced at $35, to help raise funds for the theater to reopen later this year. For tickets, go online, or call (215) 785-0100. The YouTube link will be sent to ticketholders prior to the performance.