As a result of the COVID-19 pandemic, 62% of arts workers report that they are fully unemployed, 94% have reported an income loss, 41% of arts and culture institutions are not confident that they will survive the pandemic, and 90% of music venues report that they will not reopen without relief. To shine a spotlight on these devastating statistics,  Be An #ArtsHero – a 100% volunteer-run intersectional grassroots campaign comprised of arts and culture workers, unions, and institutions in the US, entreating the Senate to allocate proportionate relief to the arts and culture sector of the American economy – has designated Labor Day (Monday, September 7) as a nationwide Day of Action called Arts Workers Unite.

Across the country, in front of US Senate offices in all 50 states and at The Capitol Building in DC, arts workers will assemble to urge their Senators to advocate for arts and culture workers and institutions. The largest demonstration will take place in Times Square, where Broadway luminaries will join the #ArtsHero cause. The socially-distanced and masked in-person demonstrations will be accompanied by streamed online events, including calls to Senators on Instagram Live, and culminating on Tuesday, September 8, from 8-10 pm ET, in “The Ghostlight Panel: Changing The Conversation About The Creative Economy” – a discussion by arts workers, arts leaders, celebrities, and economists on the socio-economic impact of arts and culture in America. 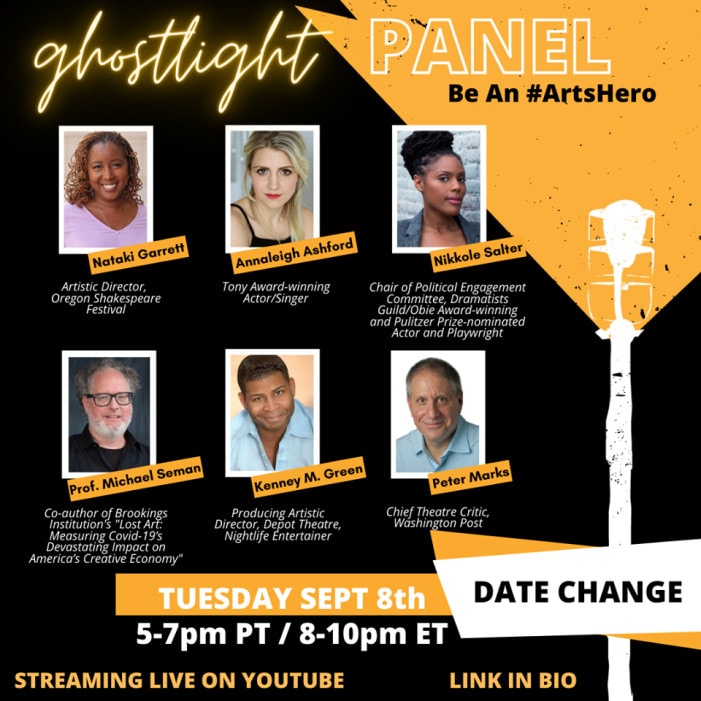 In advance of the public action, the organization has unveiled the DAWN Act: Defend Arts Workers Now, the only existing comprehensive arts worker relief policy, which recommends $43.85 billion in funding for the National Endowment for the Arts (NEA), the National Endowment for the Humanities (NEH), the Institute of Museum and Library Services (IMLS), the Corporation for Public Broadcasting (CPB), and the Small Business Administration (SBA), to issue grants to the operators, employees, and artists of live venues, recording venues, cultural spaces, and related businesses that remain shuttered indefinitely. If implemented, the relief legislation in DAWN would immediately stabilize thousands of organizations and prevent millions of arts workers from being personally, professionally, and financially devastated. The proposed bill serves as a complement to the much needed extension of FPUC and 100% COBRA subsidies.

The DAWN Act comes after its author Matthew-Lee Erlbach wrote an open letter to the Senators of the 116th US Congress, which amassed nearly 10,000 signatures from arts workers and preeminent arts institutions throughout the US, demonstrating wide support for the legislation. Erlbach believes that “the only way our economy will fully recover from this economic darkness is by the light of DAWN. There is NO ECONOMIC RECOVERY WITHOUT A ROBUST ARTS RECOVERY. Our fates are tied together.”