IN Series launches its groundbreaking 2020–2021 digital opera season with a Festival Weekend of world premieres September 17 to 19, 2020. The season, characterized by genre-defying collaborations with an international reach, promises more than 20 premiere works of innovative digital opera theater ranging from episodic shorts to animated full-length features, virtual reality, and video game operas. All productions of this season will be available free of charge in the company’s first-of-its-kind multi-venue virtual performing arts center, INVISION: The Logan Operahouse Without Walls. 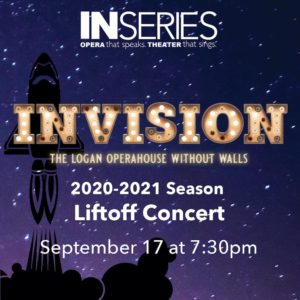 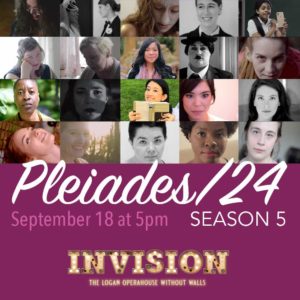 IN Series is proud to be the exclusive host and co-producer of the final season of this series from The Pleiades Project. Based on the 24 classic arias often assigned to beginning voice students, these 24 shorts recast these songs as a fresh device for telling contemporary women’s stories through both music and film. Season Five culminates the series by pushing the musical and visual boundaries of digital filmmaking in novel explorations of life, love, and creativity during COVID-19. Artist Reception to follow in the Savada Stevenson IN Circle Lounge

A FAIRY QUEEN
Available for all Saturday, September 19, at midnight
Carla Hubner ODEON 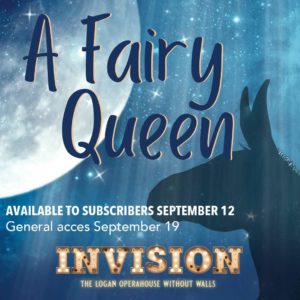 SEE ALSO: IN Series to build a digital opera house without walls

ABOUT IN SERIES
IN Series is the standard-bearer for innovative opera theater in Washington, DC. Working with local artists and diverse communities worldwide to create novel works grounded in opera and song, we challenge and reimagine these forms, folding in an expanding range of aesthetic and cultural traditions. IN Series envisions a thriving global community in which opera is a fully integrated and essential part of collective conversation. In picturing the journey to this end, IN Series is a change-maker — a force that, with each groundbreaking production and outreach event, radically transforms perceptions of the “who,” “what,” “where,” and “why” of opera: who gets to make opera and for whom is it made; what is defined as an operatic experience; where operas take place; why we make opera; and why opera matters.

Founded by Carla Hübner in 1982 as a concert series of the former Mount Vernon College, The In Series became an independent nonprofit arts organization in 2000 and has been a resident company at Source Theater since 2008. Timothy Nelson assumed artistic directorship in 2018, quickly establishing the newly rebranded IN Series as DC’s home for “Thought, debate, history, and innovation” (DC Metro Theatre Arts) in opera.

IN Series’s 2020–2021 season is made possible in part by major funding from the Morris and Gwendolyn Cafritz, Dallas Morse Coors, the Billy Rose Foundations; the Angell Foundation; Dan and Gloria Logan; the DC Commission on the Arts and Humanities and National Endowment for the Arts. We also gratefully recognize the support of Bloomberg Philanthropies; the Celtino Foundation, the Dimick foundation, Eugene Lang, Reva and David Logan, and M&T Bank.