Award-winning Brooklyn-based mentalist Vinny DePonto can’t go to Coney Island this year because of the coronavirus pandemic, so he’s bringing his new interactive mind-reading magic show Mental Amusements online and into the homes of audiences everywhere. Designed exclusively for the virtual stage and livestreaming this week with Bucks County, PA’s Bristol Riverside Theatre, the carefully crafted “carnival of the mind” uses a combination of psychological tricks, illusion, visual art, and immersive storytelling to astonish audiences with his mind-boggling skills.

DePonto’s most recent Off-Broadway stage show Charlatan was nominated for a Drama Desk Award for Unique Theatrical Production. In addition to his live performances, his consulting work has been featured in hit television shows on The Discovery Channel, NBC, and Netflix, in the most recent Broadway production of Angels in America, and at Lincoln Center in Ghost Light, by the award-winning theater group Third Rail Projects, of which he is a member.

“I have been wanting to work with Vinny for about two years now. I’ve seen a few of his shows and we’ve been talking about a number of pretty big projects,” said Amy Kaissar, who, with her husband Ken Kaissar, serves as BRT Co-Producing Director. “At some point, looking for things to do, I discovered that he had an online show he’d developed for the COVID era. So, being fans, we bought tickets and had a really fun evening. We made a night of it, set up the room for a show, got all the props we were supposed to gather, poured some wine, it was great! From there we started talking about bringing him to BRT.”

According to Amy, “I’m a huge fan of magic and mentalists. Some of my earliest theater memories were magic shows and the wonder of those experiences is truly no less now as an adult than it was then. I still don’t know how any of it is possible. All I can say is, ‘it’s magic.’ I’m a believer.”

The show runs approximately 60 minutes. Front row tickets, priced at $50, put audiences right into the action, participating in the show and having their minds read. General admission tickets, at a cost of $35, allow viewers to watch and to post comments, without being seen or heard. 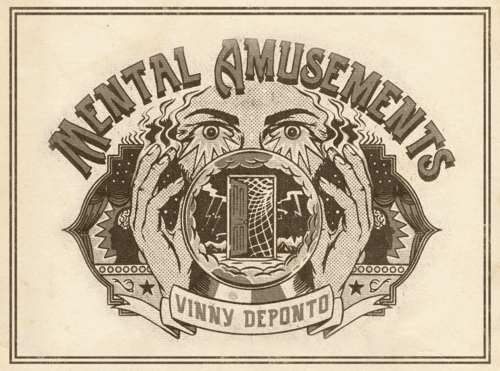 Mental Amusements livestreams through Friday, November 6, 10:30 pm. For tickets, call the Bristol Riverside Theatre box office at (215) 785-0100, or go online. More information can be found on the show’s website, and you can watch a preview of Vinny’s amazing mind-reading skills, with passersby on the boardwalk at Coney Island, here: