In a new online exhibition apropos to this year’s spectacle of presidential campaigning – “one of the few shows playing around the country at the moment” – The Al Hirschfeld Foundation presents West Wing Ha!: Presidents and their Challengers as seen by Hirschfeld. The virtual gallery contains 25 works by the famed theatrical caricaturist, which comprise not only his witty interpretations of past politicos-in-chief and their well-known opponents, but also add a touch of humor to scenes of like-themed productions from the stage and screen.

In keeping with his satirical genre and style, Hirschfeld’s focus was on the theatricality of the subjects, depicting the stars of the Oval Office, their supporting characters and antagonists, the heroes and villains, through good times and bad, with an exaggerated tone of comedy and drama. His presidential pieces, created across nine decades of his lifetime (1903-2003), garnered him two private visits to the White House, a copy of LBJ’s State of the Union address, and artwork on an aircraft carrier. It also undoubtedly contributed to his being honored with a National Medal of the Arts – the highest award given to artists and arts patrons by the US government, to individuals or groups deserving special recognition for their outstanding contributions – which was presented to Hirschfeld posthumously, in 2003.

Along with his lampoons of the real-life presidents, their historical coterie, and significant news events of their terms, the digital exhibit includes a sculpture bust of Abraham Lincoln (the first POTUS the teenage artist portrayed, in 1919, in plaster), a newspaper clipping with a scene from the Gershwin musical Let ‘Em Eat Cake (the little-known 1933 flop sequel to the Pulitzer Prize winner Of Thee I Sing), an ink-on-board drawing of the cast of the 1962 film The Manchurian Candidate (featuring Angela Lansbury, Janet Leigh, and Frank Sinatra, who invited Hirschfeld to the Hollywood set), and an image from the 1969 Tony-winning musical 1776 (showing the signing of the Declaration of Independence).

Among the more recent shows Hirschfeld captured from Broadway and TV are Sondheim’s controversial Assassins of 1991 (considered at the time to be a shocking subject for a musical) and the popular NBC series The West Wing (a lithograph commissioned by the show’s producers as a gift to the cast in 2001, dating from more than eighty years after the young Hirschfeld’s bust of Lincoln).

All of the works in the curated exhibit are accompanied by identifying labels and explanatory texts, full of informative details about the historical figures and the show-biz productions and casts depicted by the artist. 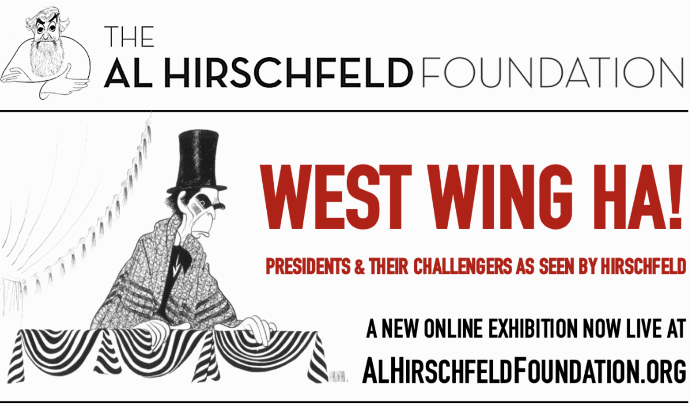 West Wing Ha!: Presidents and their Challengers as seen by Hirschfeld, from The Al Hirschfeld Foundation, runs through the fall. To view the exhibition, visit the website.