Celebrating Solas Nua’s 15th anniversary, the DC-based Irish arts organization has commissioned a series of digital plays from African-American playwright Jeremy Keith Hunter and Irish playwright John King. The first play, emoji-titled 👨🏾‍💻😷👨‍💻, is an exploration of digital language, humorously showcasing how it helps and hinders human communication. The piece was developed over the summer of 2020 during the pandemic by an international ensemble of artists from California, DC, Dublin, and London.

Shawn and Derrick are teaching a digital language class (and audience members are their students) to earn extra money during the pandemic. Derrick’s ex-boyfriend keeps texting him, but Derrick can’t find the words to explain the breakup. Join the class to help Derrick articulate digitally what he can’t say out loud. In the age of emojis and GIFs, a picture is worth a thousand words. But sometimes you really do need to talk it out. This participatory production utilizes a laptop and smartphone for optimal experience. Although both are not required, the innovative blend of theater and technology is enhanced with dual devices.

“Several months into the pandemic and social distancing measures, theater artists everywhere are inventing and re-inventing digital theater,” said Solas Nua Artistic Director Rex Daugherty. “Solas Nua has now created three different digital plays, and I’m so thrilled to open our season with 👨🏾‍💻😷👨‍💻. The title alone ‘speaks’ to the hybrid of digital theater that we are making: Can you even say this title out loud, or does it only exist in its own unique digital language?

“The play explores how digital language, like emojis and GIFs, play a vital role in how we communicate online and through social media. We’ve had a summer of experimentation (see this blog post from late July) to create, devise, and cook up something interesting, and I can say that this show is something I’ve never experienced before. That, to me, is what is exciting about this challenging moment for the theater industry. Exploring a ‘new light’ is what Solas Nua is all about (Solas Nua literally means ‘new light’ in Irish), and this world premiere is everything I love about creating new work.”

Daugherty believes that audience engagement is a necessary component of digital theater, and this play heavily uses audience participation, as patrons will be participating in the online digital language class that the actors are teaching. A laptop and a smartphone are recommended for optimal experience, but only one device is required to participate. Audiences will be chatting onscreen, in a chat feature, and joining the characters in a text-chain via their phone. Daugherty explains, “We consume digital media with multiple devices, often multi-tasking different conversations simultaneously. Although this experience might be new in a theatrical context, I think audiences will find themselves right at home while participating.” 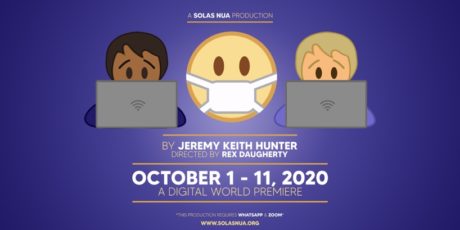 Solas Nua’s digital play 👨🏾‍💻😷👨‍💻 will run online via Zoom October 1 to 11, 2020. The run time is about 45 minutes. (See the full calendar at solasnua.org.) Tickets are $20 and available at solasnua.org. (All proceeds will support the artists.) Purchase of ticket will gain access to a Zoom invite code. Audiences will need access to a computer and wi-fi. Headphones are recommended.

John King (deviser) is a theater maker from Dublin. His previous work as a playwright includes the short play Somewhere in the future dark, developed with Solas Nua in 2019 as part of Rorschach Theatre’s Klecksography Project. His first play ERIS ran for three weeks at the Bunker Theatre in 2018 and is published by Methuen Drama. John is an alumnus of the Royal Court’s Introductory Writers’ Group, and is currently a Resident Artist at FringeLAB, Dublin. Directing credits include Will I Meet You There (Dublin Fringe Festival 2020) Summertime (Abbey Young Curators’ Festival and Drogheda Arts Festival, 2019; Dublin Fringe Festival, 2018), The Overcoat (Omnibus Theatre and OSO Barnes, 2018 and 2017), Pippin (Edinburgh Fringe and ADC Theatre, 2015), and an ongoing collaboration with London-based performance artist Joseph Morgan Schofield on work that has been seen at Camden People’s Theatre, Fierce Festival, Birmingham, and ]performance space[, Folkestone. John was an Artistic Apprentice at Studio Theatre in Washington, DC, on their 2018–2019 season. He holds an MA from RADA/Birkbeck and a BA in English from the University of Cambridge. www.johnking.ie

Rex Daugherty (producer/director/co-creator) is a DC-based theater artist and currently serves as the Artistic Director of Solas Nua. During his five years as AD of Solas Nua’s theater programming, Rex has garnered international acclaim for his productions, earned multiple Helen Hayes Award nominations, and has produced the top three highest-grossing plays in Solas Nua history. His work has been featured in The New York Times, The Washington Post, The Irish Times and aired on RTE – Irish TV. His recent production of The Smuggler was listed by The New York Times as one of the best theater productions of 2019. As an actor, he has performed at The Kennedy Center, The Shakespeare Theatre Company, The National Theatre, The Warner Theatre, Ford’s Theatre, Signature Theatre, Round House Theatre, Folger Theatre, Rep Stage, Solas Nua, and Off Broadway at 59E59. Daugherty has received three Helen Hayes nominations as part of Outstanding Ensembles and is a member of Actors’ Equity Association. Writing credits include: Snow Day, BEEP BEEP! (Arts on the Horizon), nominated for a Helen Hayes Award for Outstanding TYA Production. His musical The Devil and June Gantry (lyrics/music) was a semi-finalist for the American Musical Theatre Workshop at The Eugene O’Neill Center. Daugherty created the immersive theater game DC Dead — a zombie apocalypse survival experience, which has enjoyed sold-out shows in Washington, Oklahoma City, Atlanta, and Santa Fe. Daugherty also co-devised and originated the title role in Wake Up, Brother Bear at Imagination Stage, which has been produced regularly in DC and on regional stages for more than a decade. Rex-Daugherty.com

Navid Azeez (audio/video designer) is a multi-disciplinary Sri Lankan-American artist based out of the DC Metro area. He designs/writes/performs as a company member with both Flying V and Pointless Theatre, with whom he wrote d0t:: A RotoPlastic Ballet and Forest Treás. This is his first show with Solas Nua! Follow @YourLocalNavi on IG for glitch art and nerdcore hiphop.

A HISTORY OF NON-TRADITIONAL THEATER

Over their 15 year history, Solas Nua has garnered a reputation for innovation in non-traditional theater spaces, which earned them the prestigious DC Mayor’s Arts Award for Innovation in the Arts. Solas Nua has staged 11 site-specific productions, with locations including private residences, the Georgetown Swimming Pool, an under-construction office building, The U-Line Arena/parking garage, a floating pier on The Anacostia River, cocktail bars around the city, and many more diverse locations. These productions have set box office records, been praised by The New York Times and The Washington Post as “best theater of the year” and garnered Helen Hayes nominations and awards. And now, Solas Nua is thrilled to be a pioneer for digital theater experiences.