Launched in March, following the closure of arts venues necessitated by the coronavirus pandemic, Folksbiene! LIVE offers an online celebration of Yiddish culture, featuring livestreamed presentations of theater, American Jewish performers, concerts, lectures, talks, and other events by the National Yiddish Theatre Folksbiene – the longest continuously producing Yiddish theater company in the world for over 105 years. This October 5-8, the virtual programming continues with Welcome to Our Suke/Sukkah, a four-day family-friendly festival of performances during Chol Hamoed, the intermediary days of Sukkos (the traditional Ashkenazi spelling of Sukkot).

Motl Didner, Folksbiene’s Associate Artistic Director, explained how the new digital format is in keeping with tradition. “Sukkos is the Jewish festival celebrating the shelters in which our ancestors lived following the annual harvest as they journeyed to the temple in Jerusalem. During this holiday it is a mitzvah to extend hospitality to ushpizn (guests) and break bread together inside our shelters. This year, the virtual world has become our shelter as we are away from home at the Museum of Jewish Heritage – A Living Memorial to the Holocaust. And we invite you to be our guest and share our cultural bounty with a festival within a festival of Yiddish performing arts.”

The programs begin on Monday, October 5, with Kids and Yiddish: The Reunion Special, presented as a benefit for the Folksbiene and available for viewing only through October 9. Written by Joanne H. Borts, Michael Fox, and Zalmen Mlotek in 1998, the show was modeled after the popular TV series Saturday Night Live, Sesame Street, and the original Kids and Yiddish concert of 1993, which the three created and performed with Adrienne Cooper. It was then presented annually until 2011, with additional actors, musicians, and children added in subsequent theatrical versions produced by the NYTF – most of whom are returning for this year’s online special, directed by Avram Mlotek.

Next up on Tuesday, October 6, is Anywhere I Wander, an intimate concert by Tatiana Wechsler (recently seen in the Two River Theater production of Joe Iconis’s Love in Hate Nation), sharing her reflections on the holiday and the beginning of the Jewish New Year. With musical accompaniment provided by Folksbiene Artistic Director and Conductor Zalmen Mlotek (an internationally recognized authority on Yiddish folk and theater music), the set list contains Yiddish favorites, English favorites sung in Yiddish, and original material by Tatiana, exploring themes of home, wandering, autumn, nature, and traditions.

On Wednesday, October 7, broadcast journalist Budd Mishkin (with a career spanning almost forty years, and, since March 2019, anchor/correspondent for CBS News Radio) interviews trumpeter, keyboardist, and composer Frank London and lead singer, musician, and composer Lorin Sklamberg, founding members of the Grammy Award-winning Klezmatics (the only klezmer band ever to have won a Grammy), as part of Folksbiene’s popular Conversation series. Since their emergence in the East Village in 1986, the Klezmatics have raised the bar for Eastern European Jewish music and helped to change the face of contemporary Yiddish culture with their popular revival of this age-old nearly forgotten Ashkenazi art form, steeped in tradition and spirituality. The digital conversation will also include segments of music.

The series concludes on Thursday, October 8, with A Bisl Borscht: A Tribute to Mickey Katz, a concert of songs from the legendary musician and comedian known for his specialization in Jewish humor, to benefit the National Yiddish Theatre Folksbiene. Starring Ben Liebert (seen as Boq in the Broadway company of Wicked, and as Motl in Folksbiene’s Fiddler on the Roof in Yiddish, directed by Katz’s son and Broadway icon Joel Grey), the show, which will only be available for online viewing through October 12, also features Kathryn Krull on vocals and piano, backed by Avigail Malachi (clarinet), Clyde Daley (trumpet), and Nicole Patrick (drums), with musical arrangements by D. Zisl Slepovitch and Zalmen Mlotek. 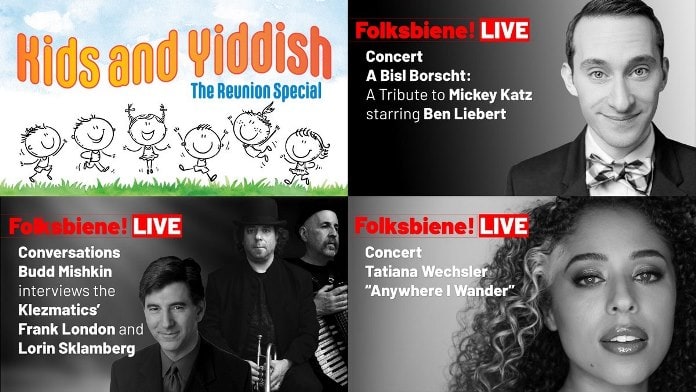 All Folksbiene! LIVE programs are presented at 1:00 pm ET, and viewable live on the website. You can catch up on past episodes on-demand (excluding the limited time exceptions noted above).