There were a number of factors that led Solas Nua, the 15-year-old theater company dedicated to presenting contemporary Irish arts, to abandon their previous project, Being Here, and devise a new piece, 👨🏿‍💻😷👨🏼‍💻, a new virtual work with an unpronouceable title that is being referred to as simply “The Emoji Play.”

For one thing, the Black Lives Matter demonstrations that exploded in June encouraged Rex Daugherty, artistic director of Solas Nua, to incorporate more Black artists into their oeuvre. And the COVID-19 pandemic threw a number of very large monkey wrenches into every aspect of live theater, from budgets and schedules to rehearsals and performances. 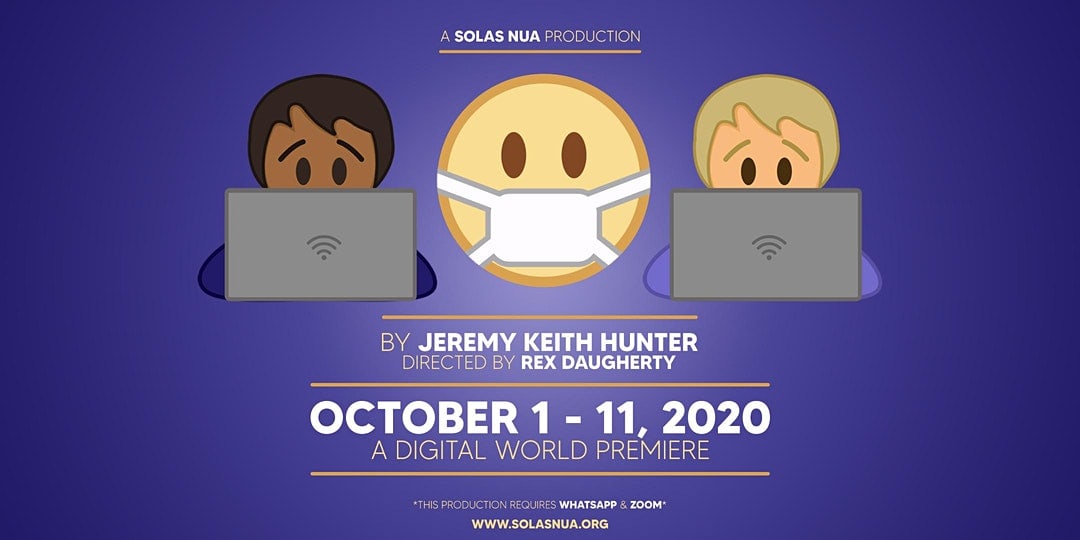 In the midst of all this turmoil, Daugherty and the rest of the Solas Nua team wrestled with how to keep the spirit of live theater alive. In a story for The Washington Post, theater critic Peter Marks, who was uniquely involved in the creation of 👨🏿‍💻😷👨🏼‍💻, quotes Daugherty as saying, “ ‘The Emoji Play’ cannot proceed without an audience. It is baked into the bones of the show… What feels special is you feel needed. That’s my theory of what will make this feel like theater. That has been my first fascination with this moment.”

Mine, too. From my first invitation to a Zoom show in mid-March, I wondered: How can a medium so intrinsically based on physical proximity and simultaneous experience be translated to a screen? Playwrights Jeremy Keith Hunter (DC-based) and John King (Ireland-based) decided to use audience participation as a way of providing the latter, during a time when the former is still dangerous.

The result is a refreshingly original, boundary-pushing comedy that both comments on our times and navigates around them to provide something that isn’t quite theater, but isn’t not theater either.

👨🏿‍💻😷👨🏼‍💻 is “staged” on two platforms: Zoom and WhatsApp. The premise is that we the audience are “students” taking a Zoom class about digital language. The two instructors are Da’Von Moody (of Silver Spring) and Cormac Elliott (of London). The show is about the relationship between Cormac and Da’Von, and about Cormac’s recent breakup with his ex-boyfriend.

Along the way, audience participation is requested via a shared WhatsApp thread, which audience members opt into prior to the show by providing their phone numbers. We are asked to respond to a variety of questions, like “describe yourself using 5 emojis” or “in GIF form, what do you think of your last relationship?” It was great fun watching the responses from other participants, who were scattered across the globe from Silver Spring to Texas to New Zealand. One person responded to the first question with five avocados, which got me cracking up from its sheer randomness. As for the second question, one participant sent a GIF of the Scooby Doo ghost, which was painfully (and hilariously) resonant for many of us in the thread.

Through these simple acts of participation, a sort of flash community was generated between the two actors and 28 audience members. At one point Cormac says, “Knowing that people are with you—it’s nice, right?” And it really is.

We are now collectively entering the third season of social distancing. As the sunlight wanes and the temperature drops, fellowship with our fellow human feels more vital than ever. 👨🏿‍💻😷👨🏼‍💻 provides a dedicated space to interact in real time. It is a container for at least some level of social proximity, albeit at a safe physical distance.

But if community, in this moment, is digital, what does that do to our language? This is the central question at the heart of 👨🏿‍💻😷👨🏼‍💻, whose title cannot even be expressed outside of its native emojis. It’s not just that in the virtual realm, we have options besides the 26-letter alphabet. It’s that in these crazy times, ordinary language seems to fail completely.

At one point, the instructors bring up the popular GIF of Wendy Williams fainting in a Statue of Liberty costume. Doesn’t that articulate watching the news in 2020 more than any well-written think piece ever could? Perhaps digital language is more than a necessary substitute—it could very well be an advancement in communication.

👨🏿‍💻😷👨🏼‍💻 is fresh, funny, and intellectually stimulating. It could be a little smoother between segments, and sometimes I wanted the pace of the show overall to pick up. If anything, I wish there was even more stimulation in terms of audience participation and methods of communication.

Overall, though, I applaud Solas Nua for being creative and agile during this chaotic time and for sharpening their focus on equity and inclusion. I’m not really sure what else to say, except: 👏🏼🙌🏼😂😚💔💞