This promises to be a great month for listening, as two major stars of Broadway and beyond share their experiences and reminiscences in new virtual conversations that are guaranteed to hold massive appeal for fans and theater historians alike. 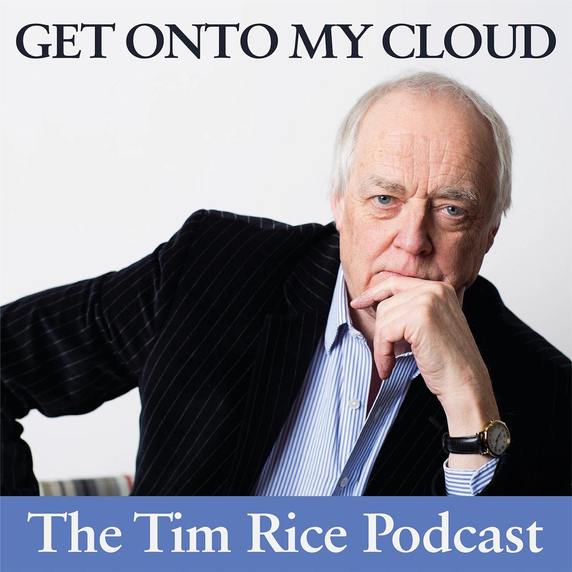 EGOT-winning lyricist Sir Tim Rice – awarded one Emmy, five Grammys, three Oscars, and four Tonys to date, in addition to a star on the Hollywood Walk of Fame, induction into the Songwriters Hall of Fame, fellowship of the British Songwriters Academy, and countless other honors – has joined the Broadway Podcast Network with Get Onto My Cloud, a series of relaxed discussions and reflections about at his esteemed career in theater and music since 1965. The episodes feature recordings of some of his favorite lyrics (from Joseph and the Amazing Technicolor Dreamcoat, Jesus Christ Superstar, Evita, and The Lion King, to name but a few of the smash hits for which he wrote), never-before-heard behind-the-scenes stories of his creative process and collaborations (having worked with such major award-winning composers as Andrew Lloyd Webber, Elton John, Alan Menken, ABBA’s Bjorn and Benny, Ennio Morricone, and Freddie Mercury), and other topics that are of enduring interest to the legendary artist, from cricket and astronomy to boxer dogs.

Get Onto My Cloud is available now on the Broadway Podcast Network, Apple/iTunes, Spotify, iHeart, and everywhere you listen to podcasts.

New this season, Off-Broadway’s Drama Desk and Obie Award-winning Keen Company presents Keen After Hours, streaming free every Monday night at 6:30 pm, on the company’s website, Facebook page, and YouTube channel. The virtual series of conversations connects audiences with luminaries of the theater world, as special guests (including company alumni and Broadway favorites) discuss their careers and artistic process with Team Keen, and take questions from listeners.

The October 19th installment features acclaimed stage and screen star Marsha Mason, whose long list of Broadway credits includes Impressionism with Jeremy Irons, Steel Magnolias, The Night of the Iguana, The Good Doctor, King Richard III, and Cactus Flower. In addition, she served as Associate Director with Jack O’Brien for the Roundabout Theater’s production of All My Sons, co-starred in the Off-Broadway world premiere of Terrence McNally’s Fire and Air, and has starred in such notable regional productions as All’s Well That Ends Well and Watch on the Rhine in Washington, DC. A recipient of four Academy Award nominations for her roles in the films The Goodbye Girl, Cinderella Liberty, Only When I Laugh, and Chapter Two, Mason has also been recognized with two Golden Globe Awards for her film work, and an Emmy Award nomination for her role on the popular TV series Frasier.

Mason’s appearance will be followed by John-Andrew Morrison and Jasminn Johnson on October 26, and Lilli Cooper on November 2. Pasts episodes of Keen After Hours, with George Salazar, Brenda Pressley, and Kate Baldwin, also remain available for viewing on the Keen Company’s website and social media pages.