As anticipated, it was just confirmed by The Broadway League – the national trade association for the Broadway industry – that the suspension of all Broadway performances has now been extended through May 30, 2021, nearly five months beyond the previously announced date of January 3.

In her just-released statement, Charlotte St. Martin, President of the Broadway League, reaffirmed the importance of Broadway and the ongoing efforts to re-open, once it is safe for theater artists and audiences alike. “With nearly 97,000 workers who rely on Broadway for their livelihood and an annual economic impact of $14.8 billion to the city, our membership is committed to re-opening as soon as conditions permit us to do so. We are working tirelessly with multiple partners on sustaining the industry once we raise our curtains again.”

Dates for each new and returning Broadway show will be announced as individual productions determine their respective performance schedules. Ticketholders for performances through May 30, 2021, should contact their point of purchase for details about exchanges and refunds. 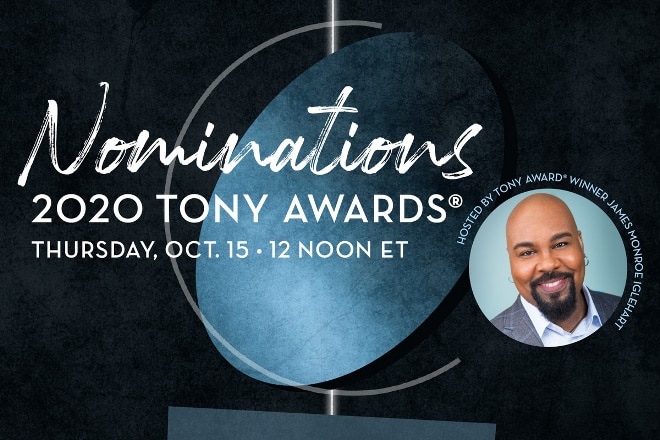 In happier news, nominations for the 74th Annual Tony Awards, presented by The Broadway League and the American Theatre Wing, will be announced at noon on Thursday, October 15, on the Tonys’ official YouTube channel. The nominations announcement, following a meeting of the Tony Awards Nominating Committee on Tuesday, October 13, will be hosted by Tony-winning actor James Monroe Iglehart (Genie in the original Broadway production of Aladdin).

A total of eighteen plays and musicals in the curtailed 2019-20 Broadway season, with opening dates and enough performances to accommodate nominators and voters prior to the coronavirus closure on March 12, 2020, have been deemed eligible for consideration. They are, in chronological order by opening date: Frankie and Johnny in the Clair de Lune;
Moulin Rouge! The Musical; Sea Wall/A Life; Betrayal; The Height of the Storm; The Great Society; Slave Play; Linda Vista; The Rose Tattoo; The Lightning Thief: The Percy Jackson Musical; The Sound Inside; Tina – The Tina Turner Musical; The Inheritance; A Christmas Carol; Jagged Little Pill; My Name is Lucy Barton; A Soldier’s Play; and Grand Horizons.

Check back with us for the full list of 2020 nominees by category on October 15, as Broadway recognizes and celebrates the outstanding achievements of the past season.