Founded in 1824, and ranked seventh on the list of the world’s most visited art museums in 2019, The National Gallery in London is home to an encyclopedic collection of more than 2,300 world-famous masterpieces of European painting from the mid-13th century to 1900 (“from Giotto to Cézanne”). Although the works are well known, well researched by Art Historians, and beloved by art aficionados everywhere, Irish poet Paul Durcan has reconsidered a selection of the paintings from his own unique perspective and imaginings in Give Me Your Hand.

A special engagement in Irish Repertory Theatre’s 2020 digital fall series of A Performance on Screen, Durcan’s personal poetic interpretations are delivered with humor, heart, and humanity by Dearbhla Molloy and Dermot Crowley, two of Ireland’s most acclaimed actors, as they take us on a virtual stroll through the museum’s treasures via projected images. The current online presentation, filmed at London’s The Coronet Theatre (filming and editing by Daniel Grixti, with original music and technical direction by Jamie Beamish) is a pandemic-time reworking of Irish Rep’s 2012 American debut of the live stage production, which had its world premiere in London in 2010.

Standing at podiums flanking both sides of a projection screen in the format of an Art History lecture, the actors, in direct address to the audience, introduce the show and each painting with factual information about the artist, the subject, and/or the period in which it was created. They then recite Durcan’s poems, which were inspired by them, bringing the figures of the past to life, giving voice to their imagined stories, and updating them for our present era, beyond the confines of time. The invented cross-temporal musings range from reflections on life, death, love, and sexuality, to family and position, by both famous historical figures and unknown everyday people depicted in portraits, religious and mythological subjects, and genre scenes, or considering the telling content of a landscape or still life.

Crowley and Molloy endow each of the painted characters with distinctive personalities and emotions, changing their tones, accents, and demeanors to suit the essence of the different subjects in their first-person commentary. They effectively reach out and deliver Durcan’s new insights into the universal experiences that the people – in the works of Van Eyck, Cranach, Rubens, Parmigianino, Del Sarto, Drouais, Degas, Gainsborough, Reynolds, Sargent, and more – faced, and we all face, in his surprising synthesis of then and now (e.g., referencing AIDS in works painted centuries before the devastating epidemic).

Grixti’s expert camerawork in the darkened room (with lights down so that the projections are clearly visible) shifts from wide angle views of the actors on stage, to close-ups of their emotive faces, to details of the paintings they consider. Like the readings of the poems, it is intimate, varied, and engaging, in Durcan’s original intersection of art, poetry, and theater. 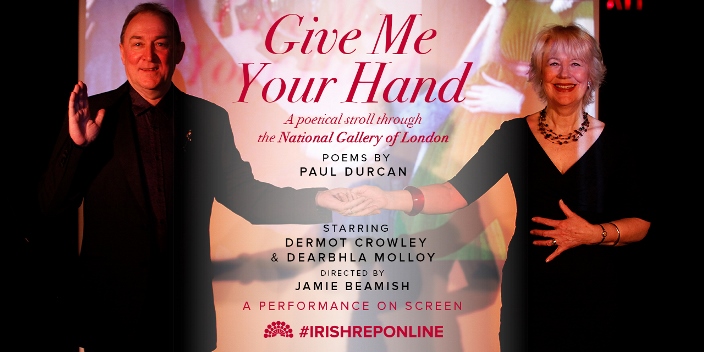 Give Me Your Hand at Irish Repertory Theatre streams through Sunday, October 18. Reservations are free, but required, to access the digital event; a donation of $25 per viewer is suggested for those who can afford to give. The program is supplemented with an online Theatre @ Home Kit, with links to further information and material on the theme, including books, articles, videos, podcasts, and more.