While Halloween parties and trick-or-treating may be on hold this year, you can celebrate the season and get your thrills with a spooky selection of shows and events streaming this week.

The Ghostlight Tour – Part of Playbill’s “Social Selects” series of imaginative theatrical experiences, The Ghostlight Tour takes audiences on a virtual journey through Broadway’s haunted past, beginning in 1893, when phantom sightings were first reported on The Great White Way. Along with the supernatural stories of spirits that are still said to lurk in the shadows backstage, guide Tim Dolan (actor and owner of Broadway Up Close Walking Tours, which he founded in 2010) will discuss the history of the theaters where the spectral apparitions are said to have occurred, including the Belasco and New Amsterdam, and the superstition of the ghostlight – a long-standing tradition of leaving a single light bulb burning when the theater is dark, maintained to the present day. Tickets for the otherworldly experience, scheduled for Wednesday, October 28, from 8-9 pm, are priced at $12.99. Upon registration, you will receive an email with a unique personal access link (which cannot be shared). Prior to the event, you will be able to download a map, to follow along with the digital tour. 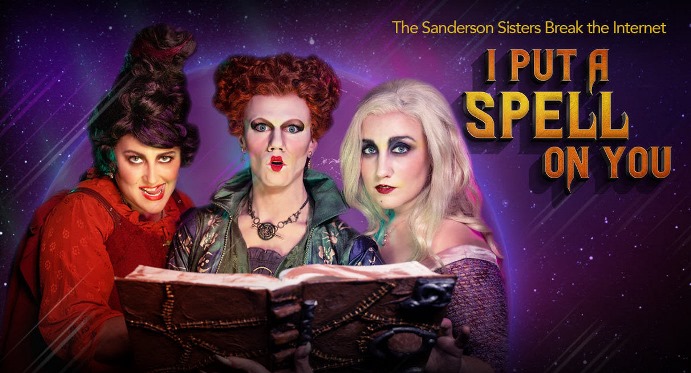 I Put a Spell on You – Jay Armstrong Johnson’s annual sold-out tribute spoof of the cult classic movie Hocus Pocus goes digital this year with the pandemic-safe cinematic concert/party I Put a Spell On You: The Sanderson Sisters Break the Internet, co-presented with Con Limón Productions. The bewitching extravaganza, starring Johnson, Allison Robinson, and Amanda Williams Ware, features performances by Broadway’s Nick Rashad Burroughs, Gavin Creel, Drew Gehling, J. Harrison Ghee, Todrick Hall, Robyn Hurder, Eva Noblezada, Ahmad Simmons, and Will Swenson, drag favorites Bob The Drag Queen, Kizha Carr, Marti Gould Cummings, Peachez, and Alexis Michelle, and others, in a fully produced spectacle rehearsed at Open Jar Studios and filmed last month in NYC and Saratoga Springs, under strict COVID-19 protocols. Expect an internet overload as legions of fans tune in for the over-the-top costumes and make-up, larger-than-life performances and choreography, iconic villains and delightfully devious plot. The stream, on Thursday, October 29, at 8 pm, is free, but donations to benefit Broadway Cares/Equity Fights AIDS are encouraged. You can also become a VIP or sponsor, and receive insider perks that include pre- and post-show cocktail parties with the stars, CDs and autographed posters, and more. 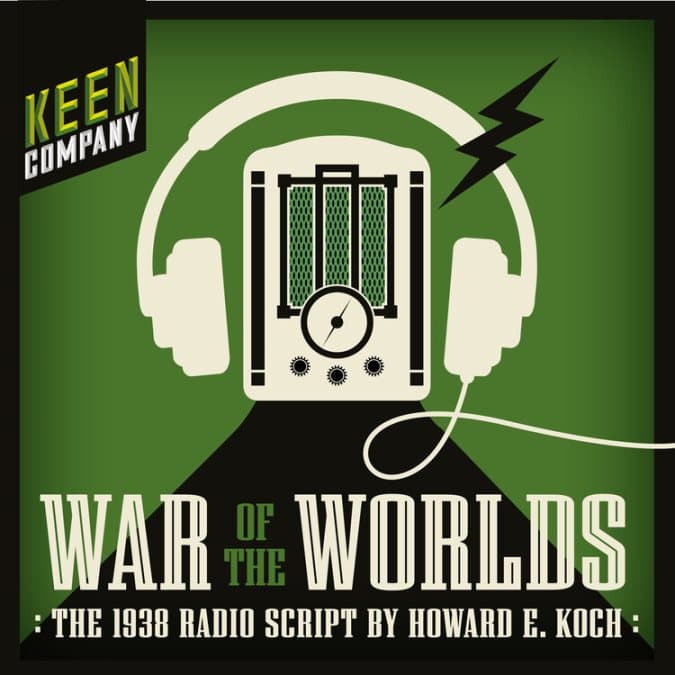 War of the Worlds – On Friday, October 30, at 8pm, Off-Broadway’s Obie and Drama Desk Award-winning Keen Company will present an all-star benefit livestream of Howard Koch’s legendary adaptation of H.G. Wells’ 1897 sci-fi novel War of the Worlds. When the infamous radio play was directed and performed by Orson Welles exactly 82 years ago, on the night before Halloween in 1938, listeners found it so convincing that the “fake news” story of a Martian invasion making its way to NYC caused real-life mass hysteria across the US. The cast of Keen’s one-night-only live audio broadcast will be led by Jason Tam (Be More Chill), who will be joined by Arnie Burton, Dan Domingues, Morgan Siobhan Green, Khiry Walker, and more, with original music by Paul Brill. Tickets are $25 and include a post-show talkback with the artists. Proceeds from the fundraiser will support Keen Company’s programming, including its Hear/Now audio theater season, the Keen Playwrights Lab for mid-career writers, and Keen Teens, serving students in all five boroughs. 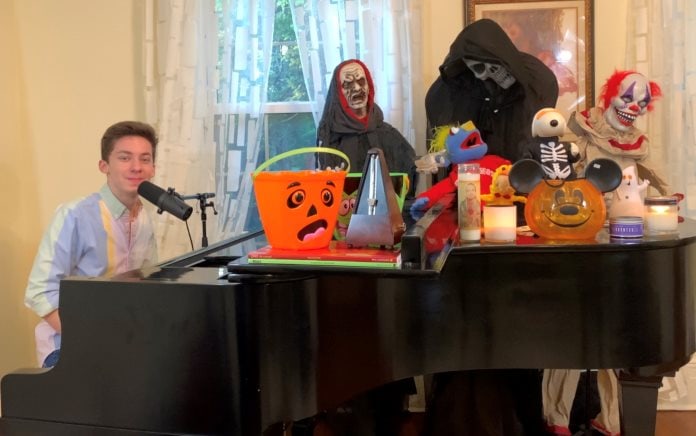 My Halloween Friends – To conclude his “Barthtoberfest” (a month-long series of digital Halloween shows and festivities), Andrew Barth Feldman (Dear Evan Hansen) will premiere My Halloween Friends at midnight on October 31, on his YouTube channel. The 20-minute special – part concert, part musical, part variety show, and full-out party! – will feature appearances by an all-star line-up of some of Feldman’s BFFs from Broadway, including Alex Boniello (Spring Awakening), Antonio Cipriano (Jagged Little Pill), Celia Rose Gooding (Jagged Little Pill), Reneé Rapp (Mean Girls), Will Roland (Be More Chill), and Samantha Williams (Dear Evan Hansen). In addition, there will be four original Halloween songs by Feldman, an all-new arrangement of a Halloween classic, and a host of silly spine-tingling seasonal surprises. Following its All Hallows Eve debut, the video will remain online until further notice. 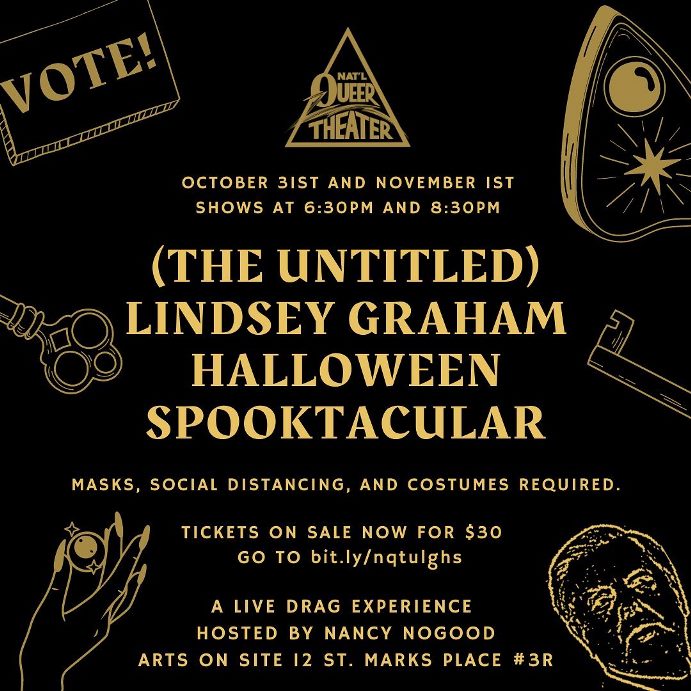 (The Untitled) Lindsey Graham Halloween Spooktacular – In National Queer Theater’s live Halloween show at Arts on Site (12 St. Marks Place, Studio 3F), host Nancy Nogood asks the burning question, “What do a drag queen in quarantine and a certain South Carolina senator have in common?” With her signature combination of drag and performance art, Nancy (@shesuptonogood) will let you know that they’re both “starved for the touch of a man!” as she scoffs at conventionalism and reveals her imaginings about the elusive politico behind the TV screen. Directed by Dmitri Barcomi, the “Spooktacular” plays October 31 and November 1, with a 6:30 pm and 8:30 pm performance each evening. A mask and a costume are required to attend; tickets are priced at $30. Seating is limited to fifteen audience members per performance, following pandemic protocol (and please be advised that the venue’s elevator is currently out of order, so you’re going to have to walk up, even if you’re wearing your highest stiletto heels). But if you can’t make it downtown or up the stairs, the show will also be livestreamed on the 31st, so you can still get the virtual Nogood scoop on the senator!