After a long seven-month hiatus necessitated by the COVID-19 closure of live-on-stage performances, The Doo Wop Project made its highly anticipated return last night with its first-ever virtual concert, presented by Ken Davenport and streaming live from New York’s New World Stages – and every second of it was well worth the wait! While it’s often said that “the performers were having as much fun as the audience” (and they clearly were), I still wouldn’t think it could be possible for them to have had as much fun as I did watching The Doo Wop Project: Live In Your Living Room. Oh, what a night!

Interspersed among the numbers were some personal backstories from the artists about how they founded the group (while they were starring in Jersey Boys), what the music means to them and to all of us (it brings everyone of every race, ethnicity, gender, and orientation together with a message of hope, love, and camaraderie), and a request that all of us at home sing and dance along remotely with the familiar songs (we did!). They also interacted with the audience via live chat, including a real-time vote on which Four Seasons song we wanted them to sing (“Sherry” or “Big Girls Don’t Cry”) – the outcome of which was a fabulous surprise (signal jazz hands!) and another highlight in an evening filled with highlight after highlight.

For fans of the vintage doo-wop groups, songs, and choreography, the show included such standards as “Remember Then” by The Earls, “Baby Come Back To Me” by The Capris, “Come and Go with Me” by The Del Vikings (one of the earliest groups to be integrated), and the up-tempo “Speedoo” by The Cadillacs, with Cooper’s ebullient blockbuster dance moves commanding the spotlight. The concert also featured works of the next generation inspired by the ‘50s originals, like Smokey Robinson & The Miracles’ “Tears of a Clown,” Chubby Checker’s “The Twist” and “Let’s Twist Again,” and re-imagined doo-wop versions of Michael Jackson’s “The Way You Make Me Feel,” “Valerie” by Amy Winehouse, Garth Brooks’ “Friends in Low Places,” and “I’m Yours” by Jason Mraz, masterfully bringing the doo-wop style into the 21st century and introducing the genre to music-lovers of all ages. Of course, it’s not just the choice of songs, but The Doo Wop Project’s extraordinary talent as singers, dancers, and all-around entertainers that holds massive appeal for everyone of any age.

The knockout concert ended with the Four Seasons’ smash hit “December, 1963” (“Oh What a Night”), and oh boy, was it! If you missed this spectacular one-night-only event, you can look forward to December, 2020 (exact date soon to be announced), when The Doo Wop Project returns to the stage, and the internet, for a virtual Christmas concert that is sure to make your holidays merry and bright. 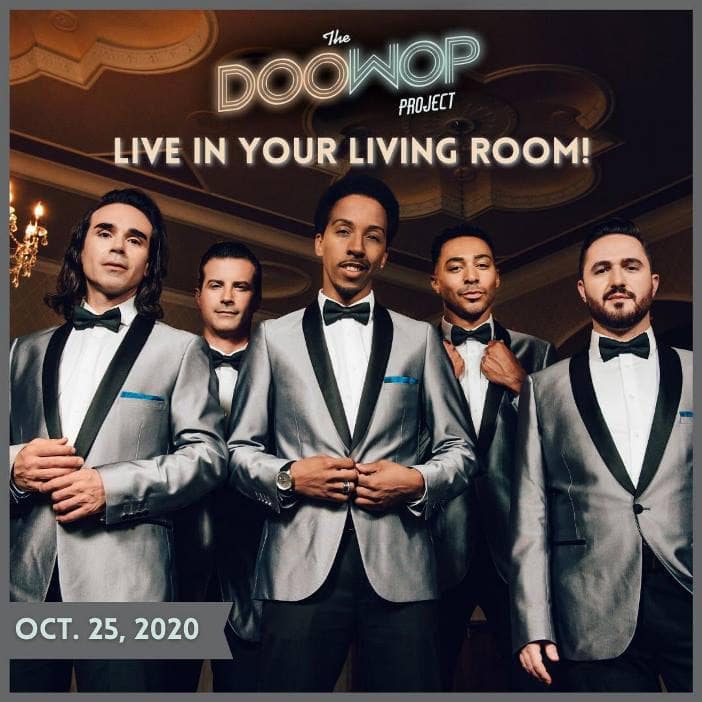 The Doo Wop Project: Live In Your Living Room was broadcast live from New World Stages, NYC, on Sunday, October 25, at 7:00 pm.