On Thursday, November 12, Broadway’s Best Shows returns to the digital screen with a new limited-time livestream production of Boston Marriage, written and directed by playwright David Mamet (recipient of the 1984 Pulitzer Prize for Glengarry Glen Ross). This latest installment in the seven-part #Spotlightonplays series of stage classics by renowned writers with all-star casts features Tony Award winner Patti LuPone (Evita), the playwright’s real-life wife Rebecca Pidgeon (who originated her role in the show’s world premiere in 1999), and Sophia Macy (recently seen in an episode of the CBS TV series The Twilight Zone). 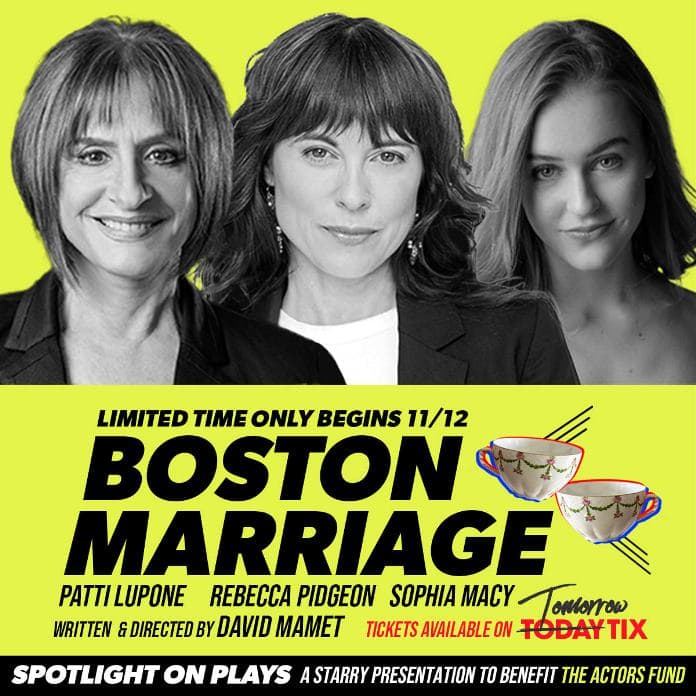 The play’s title references a term originally coined by Henry James in his 1885-86 novel The Bostonians, which was used in the 19th-early 20th century to describe an intimate companionship of two single women living together, independent of men. Mamet’s all-female anti-patriarchal story navigates the issues that arise in the relationships of Anna and Claire (two “women of fashion”) and Anna’s Scottish-born maid Catherine, delivered with humor and feminist awareness through clever Victorian-style repartee, witty double-entendres, and the vernacular of the era.

Boston Marriage will debut on Thursday, November 12, at 8:00 pm, and will then become available to watch on demand for the following 72 hours. Tickets, sold exclusively through TodayTix, are on a pay-what-you-can scale, starting at $5, with proceeds to benefit The Actors Fund. Viewers will receive a streaming link four hours prior to the premiere performance on November 12. You can check out the trailer here: