Separated by continents, an estranged father and son reunite over Zoom. From their respective kitchens in Ramallah and in New York City, they recreate a cherished family recipe and struggle to bridge the gap between them, one ingredient at a time. Told in real time through the intimacy of a video call with humor and humanity, Amir Nizar Zuabi’s new play This Is Who I Am explores the unpredictable nature of grief and the delicacy of family connection across geographical and generational divides.

The author, Amir Nizar Zuabi—who grew up in Palestine, moved to London for a time, and currently resides in Jaffa—is an award-winning theater writer and director and the artistic director of the Palestinian theater company ShiberHur based in Haifa. 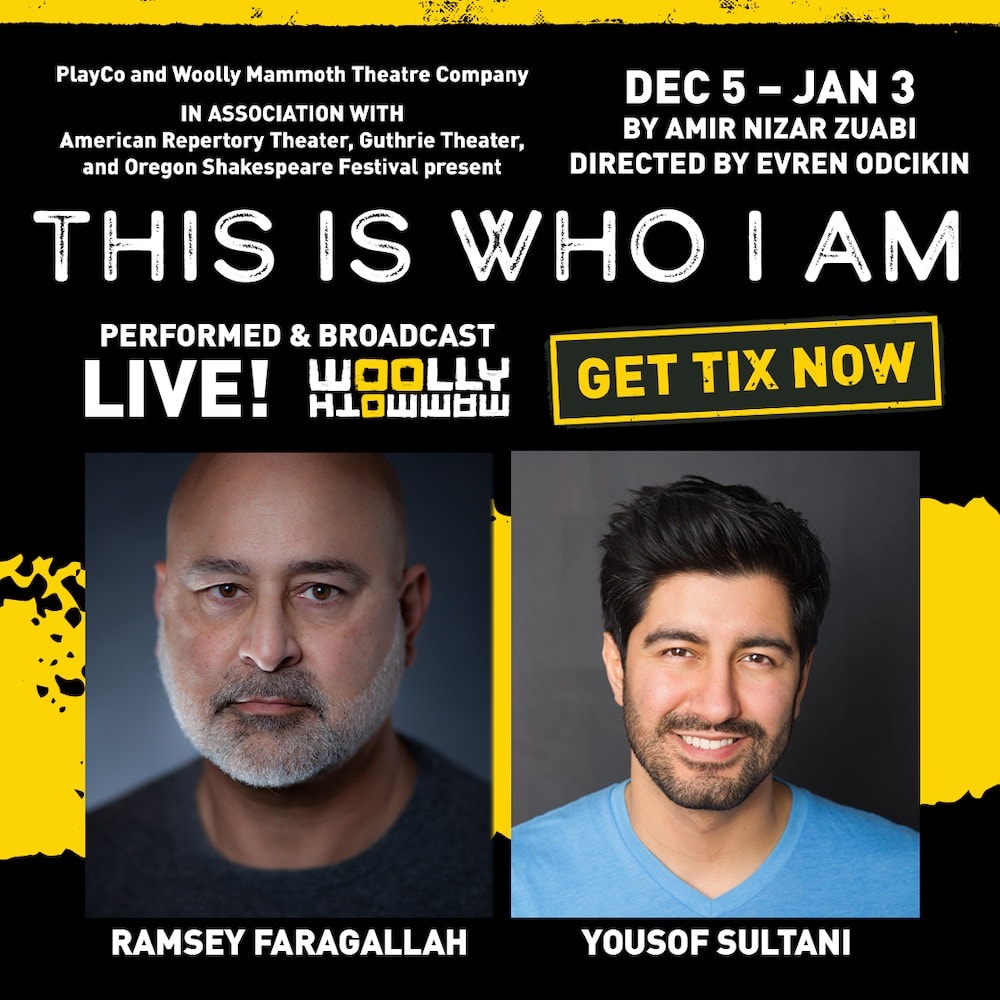 He explains, “I left my country at a certain point and remembered these awkward long-distance conversations. Now, many hours of my day have been spent Zoom-ing since January; one of the big frustrations is that we’re very close, and I can look at people’s houses and feel very intimate with them but at the same time we’re deprived of our sensory ability and are separated by two walls of glass. But if two people are both cooking the same dish, at least the smells are similar and the noises might be happening at the same time, so suddenly we are creating a mutual world. All of these things combined in creating this: my need to take revenge from Zoom and its limitations; the fact that food was on the table for this project from the very get-go; and the fact that as I’m grieving [the loss of my own parents four and five years ago] a lot of other people started grieving from the actual pandemic.”

Woolly Mammoth Theatre Company Artistic Director Maria Manuela Goyanes: “If you had told me my first commissioned play for Woolly Mammoth would be a co-production with five other major arts institutions in the country, written by the brilliant Amir Nizar Zuabi, and live-streamed rather than performed on stage, I would have had trouble believing you! Yet to categorize this project as a piece of pandemic theater feels incorrect. Amir has written a story specifically meant to be told through a video call, connecting form and content seamlessly. The experience is intimate and still inherently theatrical. I am so honored to have co-commissioned this piece with PlayCo and to continue to poke at the boundaries of what theater can be; both online and in person.”

PlayCo Founding Producer Kate Loewald: “This project has come together as PlayCo celebrates 20 years of producing new plays by international writers. It’s a joy and an honor to continue our creative relationship with Amir Nizar Zuabi, whose Oh My Sweet Land is a highlight of PlayCo’s body of work to date. I’m so happy to be working alongside Maria Goyanes, whom I admire so much, and to partner with an amazing group of theaters across the country. I’m moved to see artists and organizations rally around this experiment in theater-making for our time—one that gets as close to live theater as is possible right now. It’s a beautiful demonstration of PlayCo’s mission to generate a global program of new work that puts artists and audiences in conversation with the world. That feels more necessary than ever in this moment of isolation and alienation.”

Having presented his site-specific “wrenching and shrewd solo show” (The New York Times, in a Critics’ Pick review) Oh My Sweet Land in kitchens across New York City with PlayCo, Zuabi expands the meaning of site-specificity with this new piece. Performed in two actors’ kitchens (in which they cook fteer, a Palestinian flat bread), the play is also set across the divide of two computer screens. Zuabi here deepens his exploration of the kitchen as a space of sensorial stimulation, familial legacy, and discussion that organically slips between intimate and external circumstances—and finds a new setting to consider: Zoom. In This Is Who I Am, two actors perform a balancing act of care and resentment, closeness and vast separation, as they cook in real-time over video chat.

Director Evren Odcikin (associate artistic director at OSF), who worked for Golden Thread Productions when they likewise presented an acclaimed production of Oh My Sweet Land on the West Coast, describes a close personal identification with Zuabi’s work: “This is Who I Am is my introduction to OSF audiences as an artist, and I am proud that my new artistic home is helping uplift this personal play from one of my favorite writers. It’s a great alignment of OSF’s programmatic values and my personal mission to champion Middle Eastern and Middle Eastern American stories and artists.” Odcikin, who is an immigrant from Turkey, adds that he was struck by the play’s nuanced depiction of masculinity with a Palestinian father and a Palestinian-American son. “I have never seen an accurate depiction of my personal experience as a Middle Eastern male immigrant on American stages. The nuance and care Amir has given to both the Father and Son in the play, I haven’t seen that. My hope is that the audience will experience this complicated relationship as a gift as personal and imperfect as cooking together can be.”

Diane Paulus, A.R.T. Terrie and Bradley Bloom artistic director: “The pandemic has created both necessities and opportunities to make new art forms and producing models. This partnership across five theaters is emblematic of the resilience and innovation we need to embrace in our industry and the institutional responsibility to support artists during this challenging time. The A.R.T. is very grateful to join the team in supporting Amir and the brilliant company of artists assembled to bring his deeply moving play—born out of this moment—to life.”

Joseph Haj, artistic director of the Guthrie Theater and production dramaturg for This Is Who I Am: “Last season the Guthrie presented Amir’s beautiful production of Grey Rock, and our audiences fell in love with the piece. I’m incredibly admiring of Amir and his work and I’m thrilled to be able to join this fantastic creative team. The opportunity to work with such a smart, creative, and passionate group of people is one I’m thankful for and I think our audiences, across all of the partners, are going to be offered something quite special.”

Tickets, starting at $15, are available online at woollymammoth.net, by phone at (202) 393-3939, and via email at tickets@woollymammoth.net. To make this production accessible for as many audiences as possible, special rates for tickets to preview performances will be offered. 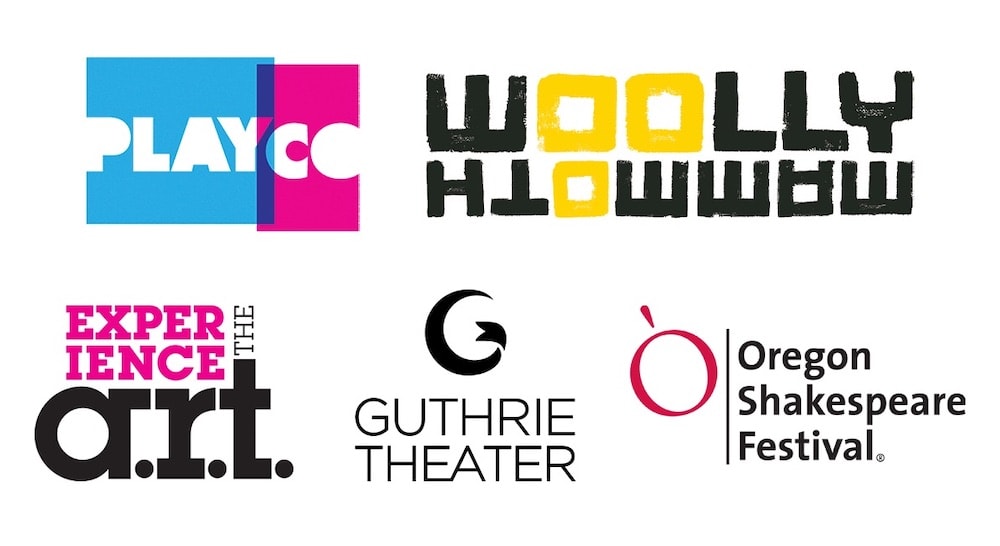 About Woolly Mammoth Theatre Company
Woolly Mammoth is “the hottest theater company in town” (Washington Post); priding itself on developing, producing, and making theatre that disrupts conventional processes and stimulates transformative experiences. For almost four decades, Woolly has held a unique position at the leading edge of the American theater, earning a reputation for staying “uniquely plugged in to the mad temper of the times” (New York Times). The co-leadership of María Manuela Goyanes (Artistic Director) and Emika Abe (Managing Director) is supported by a core company of artists that holds itself to a high standard of artistic excellence. Woolly is relentless in its desire to take risks, experiment, innovate, interrogate, and create a radically inclusive community. Located in Washington, DC, Woolly Mammoth stands upon occupied, unceded territory: the ancestral homeland of the Nacotchtank whose descendants belong to the Piscataway peoples.

About American Repertory Theater
American Repertory Theater (A.R.T.) at Harvard University is a leading force in the American theater, producing groundbreaking work that is driven by risk-taking and passionate inquiry. A.R.T. seeks to expand the boundaries of theater by programming transformative theatrical experiences, always including the audience as a central partner, and is committed to a long-term process of centering anti-racism in its practice, policies, culture, pedagogy, governance and organizational structure. Under the leadership of Terrie and Bradley Bloom Artistic Director Diane Paulus and Executive Producer Diane Borger, A.R.T. has received 19 Tony Awards including: Pippin, The Gershwins’ Porgy and Bess, and All the Way. Other Broadway productions include Jagged Little Pill; Waitress (also US National Tour and in London’s West End); Natasha, Pierre & The Great Comet of 1812; Finding Neverland; The Glass Menagerie; and Once. A.R.T.’s club theater, OBERON, has been recognized annually as a top performance venue in the Boston area, and has attracted national attention for its innovative programming and business models. As the professional theater on the campus of Harvard University, A.R.T. is committed to playing a central role in the cognitive life of the University, catalyzing discourse, interdisciplinary collaboration, and creative exchange among a wide range of academic departments, institutions, students, and faculty members. Dedicated to making great theater accessible, A.R.T. actively engages more than 5,000 community members and local students annually in project-based partnerships, workshops, conversations with artists, and other enrichment activities both at the theater and across the Greater Boston area. A.R.T. acknowledges that its theaters are situated on the traditional and ancestral homelands of the Massachusett Tribe.

About the Guthrie Theater
The Guthrie Theater (Joseph Haj, Artistic Director) is an esteemed center for theater performance that seeks to illuminate our common humanity and transform our world through the power of live theater. Based in Minneapolis, Minnesota, and firmly rooted in the community since 1963, the Guthrie is dedicated to producing classic and contemporary works with excellence, cultivating artists and inspiring the next generation of theatergoers.

About Oregon Shakespeare Festival
Founded by Angus Bowmer in 1935, the Oregon Shakespeare Festival (OSF) has grown from a three-day festival of two plays to a nationally renowned theatre arts organization that presents an eight-month season of up to 11 plays that include works by Shakespeare as well as a mix of classics, musicals, and world-premiere plays and musicals. OSF’s play-commissioning programs, which include American Revolutions: the United States History Cycle, have generated works that have been produced on Broadway, internationally, and at regional, community, and high school theatres across the country. The Festival draws attendance upwards of 400,000 to more than 800 performances annually and employs 400 to 600 theatre professionals. OSF invites and welcomes everyone, and believes the inclusion of diverse people, ideas, cultures, and traditions enriches both our insights into the work we present onstage and our relationships with each other. OSF is committed to equity and diversity in all areas of our work and in our audiences. OSF’s mission statement: “Inspired by Shakespeare’s work and the cultural richness of the United States, we reveal our collective humanity through illuminating interpretations of new and classic plays, deepened by the kaleidoscope of rotating repertory.”

SEE ALSO:‘JookJOYnt’ from Woolly and Makers Lab to jump with Black LGBTQ+ joy