Silver Spring Stage is offering a new season of virtual performances. First up is Lobby Hero by the Academy Award–winning Kenneth Lonergan, an absorbing play where good intentions can be undermined by unconscious desires. The Stage is also making available the powerful Monologues of Black Authors for rental. And for the holiday season, the Stage presents storytelling and festive favorites. 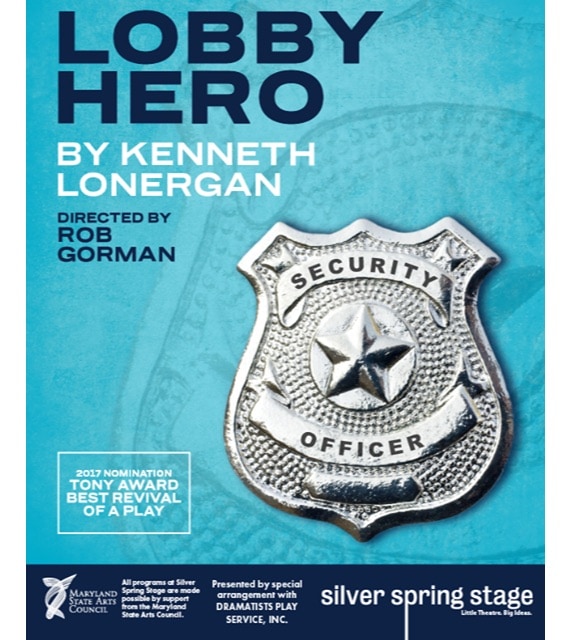 Lobby Hero, directed by Rob Gorman, opens in virtual performance on November 20, 2020, and will be available to stream in six performance through December 13. Buy tickets here, and join the show’s artists for a virtual talkback on December 13 at 4:30 p.m.

About the play: Jeff, a white twenty-something guy, works as the new lobby security guard at an apartment building in New York City. He is someone who has likely been called a “loser” and by more people than just his own father. He is trying to get his life together and has a lot of respect for his boss, William, a tough, straitlaced African-American guy around his own age. He also idolizes the “real” city cops who work the area surrounding the apartment building—especially the pretty one, Dawn. Dawn’s partner, Bill, is larger than life, and gives Jeff another person to look up to. When his boss’s brother gets accused of participation in a robbery-murder and as Dawn works to walk the line between being a “good cop” and standing up to sexual misconduct on the force, the play shines a light on the racial bias and sexism inherent in America’s justice and law enforcement systems with a surprising dose of endearing sweetness.

The first episode of Oma’s Bedtime Stories for Big Peoples, “How the Camel Got His Hump,” is available for on-demand rental now. Madame Yurina Babushka, known as Oma, imparts her motherly wisdom while reading bedtime stories to all who will listen. Hear stories from Hans Christian Andersen, Brothers Grimm, Rudyard Kipling, and more. Oma will delight you with her insights on life and these timeless tales.

Stuck at home for the holiday season and worried you’ll miss your annual Scrooge fix? The Stage, in cooperation with Talking Fish Podcasts, will soon premiere A Christmas Carol in a serialized radio-play format, with several installments between early December and the night of the ghostly visits.

On December 6 at 5:00 p.m., Julia Rabson Harris of Constellation Theatre facilitates the first session of the Playreaders Book Club, a timely look at Anne Washburn’s dystopian satire Mr. Burns: A Post-Electric Play, about what happens when the Simpsons go from pop culture icons to mythic symbols of a dim past. Register here for the Zoom-based event.

•Home-streaming rental of the stage’s 2019 production of Oscar Wilde’s The Importance of Being Earnest.

•The first month of the new year will offer Lauren Gunderson’s Ada and the Engine, directed by Jon Jon Johnson. The show opens in virtual performance on January 15, 2021.