A variety show, a talk show, and a newly-commissioned dance piece are among the free selections streaming from NYC this Friday through Monday, all of which will remain available online for future (or repeated!) viewing.

New York is Burning – In commemoration of the 30th anniversary of Paris Is Burning (the 1990 documentary film chronicling the culture of drag balls and voguing in the Black, Latino, gay, and transgender communities of 1980s NYC, in the face of racism, homophobia, and the AIDS crisis), Works & Process at the Guggenheim commissioned Omari Wiles, legendary founder of the House of Oricci, to create a new exploration of race, class, gender, and sexuality in America inspired by the original. Performed by Les Ballet Afrik and filmed on the campus of Lincoln Center for the Performing Arts, New York Is Burning reflects the aspirations of a diverse group of dancers for which the company serves as a surrogate family during our present period of health, race, and financial crises, just as the opportunity to perform at Lincoln Center represents for them an affirmation of love, joy, and acceptance.

Developed this past summer at Kaatsbaan Cultural Park in the Hudson Valley during a Works & Process bubble residency (following strict COVID-19 safety protocol), the choreography features Wiles’s signature AfrikFusion style, combining traditional African dances and Afrobeat with house dance and vogue. The video performance premieres digitally on Sunday, November 22, 7:30 pm, on the Lincoln Center website, Facebook page, and YouTube channel, as well as on Works & Process at the Guggenheim’s Facebook and YouTube pages. When it is once again safe for artists and audiences to gather, New York Is Burning will debut live, in full form, at Works & Process at the Guggenheim. 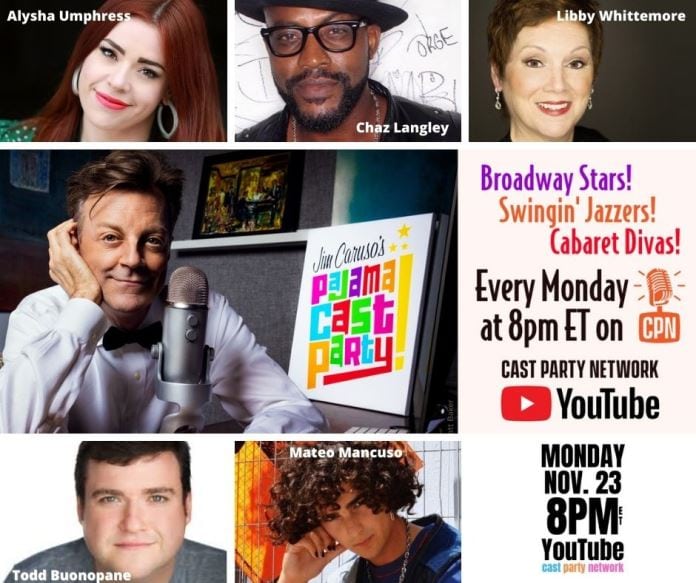 Jim Caruso’s Pajama Cast Party – After hosting his weekly Cast Party every Monday night at Birdland since 2003, showman Jim Caruso wasn’t about to let the temporary pandemic shutdown of the iconic nightclub on West 44th Street put a halt to his award-winning open-mic night. Instead, with the technical expertise of producer Ruby Locknar, he went virtual, to bring the popular musical variety show into the homes of viewers everywhere via the YouTube Cast Party Network. So put on your favorite pair of PJs, make yourself a cocktail, and join the high-spirited Caruso, a lineup of showbiz superstars, and featured students (who won’t be able to participate this year in their senior recital or high-school musical) for an evening full of effervescent wit, impromptu conversations, and a selection of songs from Broadway, jazz, and cabaret. 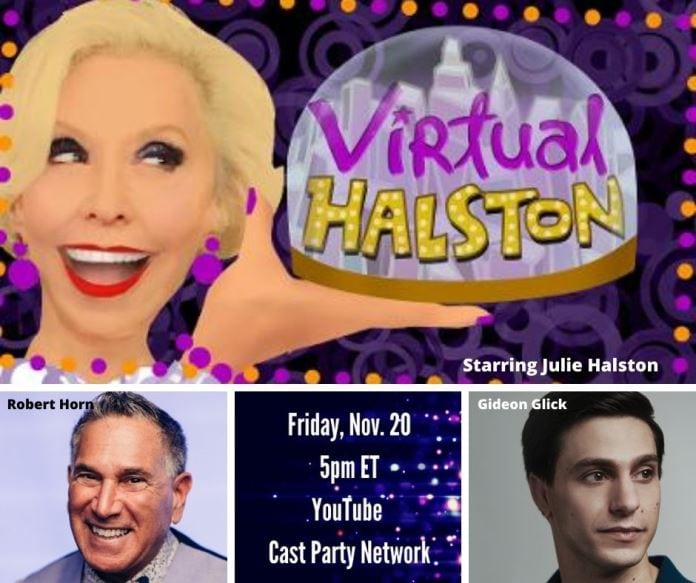 Virtual Halston – Also on the Cast Party Network on YouTube, actress and comedienne Julie Halston takes to the internet every Friday at 5 pm for a live hour-long real-time chat with show producers Ruby Locknar and Jim Caruso and some of her famous friends. Known for her acclaimed roles in the Broadway productions of Tootsie and Hairspray, as Bitsy Von Muffling on the hit TV series Sex and The City, as a founding member of Charles Busch’s Off-Broadway Theatre-in-Limbo, and co-star of the company’s Vampire Lesbians of Sodom (which ran for six years), Halston – who was honored with a Lifetime Achievement Award from The Off-Broadway Alliance in 2011 – brings her free-flowing observations and natural humor to the unscripted weekly talk show, as you get to know her and her guests

This week (November 20), Tony-winning writer Robert Horn (Tootsie) and Broadway actor Gideon Glick (To Kill A Mockingbird) join Halston’s gab-fest. The show is free and open for everyone to enjoy (no reservation or access code required), but donations are encouraged to support the Pulmonary Fibrosis Foundation, which collaborates with physicians, organizations, patients, and caregivers worldwide to combat a disease that causes progressive scarring of the lungs. Each episode of Virtual Halston is archived, so if you miss the livestream, you can watch it at a later date and time.