If you’re looking for a family-friendly show to kick off the holidays at home this year while keeping you connected to your favorite all-ages hits from Broadway during the coronavirus hiatus, tune in tonight for the third edition of The Disney Holiday Singalong on ABC-TV. The festive one-hour special, running from 8-9 pm, will not only fill you with the magic of the season, but also raise awareness about Disney’s Feed the Love campaign, inspiring everyone to #ChooseKindness, with voluntary donations from generous viewers who are able to help, to benefit Toys for Tots, Feeding America, and One Simple Wish.

Hosted by Ryan Seacrest, the televised event will again include animated on-screen lyrics to allow audiences at home to sing along with the stars to the familiar Disney songs and classic holiday carols. Among the featured luminaries set to appear from the New York stage are members of the Broadway casts of Disney Theatrical Productions’ The Lion King and Aladdin (both of which are scheduled to reopen once it’s safe to resume live in-person performances at NYC theaters), along with the North American touring company of Frozen (which, as Disney previously announced, will not return to Broadway at the end of the pandemic, but plans to resume its nationwide tour in 2021).

The hour-long special also includes Hamilton Tony winner Leslie Odom, Jr. (singing “What’s This?”), and, throughout the show, the seven-member a cappella group DCappella will be caroling. In addition, you can sing along with a full line-up of musical celebrities from the world of opera to pop and rock, in a star-studded night that spotlights performances by Andrea Bocelli (“Silent Night”), BTS (“Santa Claus Is Coming To Town”), Michael Bublé (“It’s Beginning to Look a Lot Like Christmas”), Ciara (“Rockin’ Around the Christmas Tree”), Chloe x Halle (“Do You Want to Build a Snowman?”), Derek Hough and Hayley Erbert (“Hey Santa” and “Jingle Bells”), Julianne Hough (“Whistle While You Work” and “Let It Snow”), Adam Lambert (“Have Yourself a Merry Little Christmas”), Katy Perry (“I’ll Be Home for Christmas” and “Cozy Little Christmas”), P!NK (“The Christmas Song” – aka “Chestnuts Roasting on an Open Fire” – with her daughter Willow Hart), and Kerry Washington (“Joy to the World”). 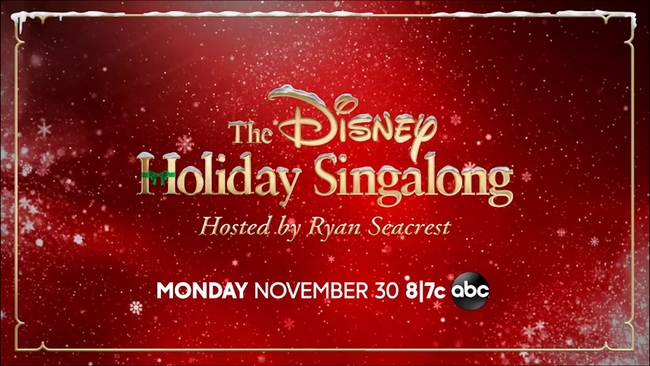 The Disney Holiday Singalong plays on Monday, November 30, 2020, at 8 pm, on ABC-TV and a variety of live TV streaming services, including YouTube, Sling, and Roku; it will also be available after tonight’s debut on Hulu.