Working on James Baldwin’s The Amen Corner was one of the most fulfilling artistic experiences I have ever had. During this time of the shutdown when live theater has all but ground to halt and so many artists like myself and my brilliant scenic designer Dan Soule are wondering if, when, and how we will ever return to our art form, I have been amazed by how much working on that production has sustained me. The memory of the production and what it was like working in DC has provided us both hope, and strength. I still hear Victor Simonson’s beautiful arrangements, and remember the feeling I had when the ensemble hit the stage for the first time in costume.

That was the last production I was able to see through to opening. No one could have foreseen that, and I often wonder how much I took for granted in what was truly an easeful and soulful process. From casting, to rehearsals, to tech, to opening—meeting Simon Godwin and the incredible staff at the theater, and meeting other artistic leaders in the DC area at large—The Amen Corner will truly inform every inch of my artistic practice moving forward. Most of all, it created a very special bond between Dan and myself as we were able for the first time to dream together for a stage and audience of that size.

When the theater informed me that the set was still up, something mournful yet hopeful occurred. Normally when you bring a piece of theater to life, it has an expiration date in mind. Unless the play or musical is running on Broadway or touring, the artistic work of the design team and performers is created to last only for an ephemeral moment. So the fact that the physical world that Dan, Adam Honore, Andy Jean, and Broken Chord built is still intact is very surreal. On the one hand, it is painful to think of the theater dark—to think of all that special kinetic energy we built together evaporating into an empty house. On the other hand, there is an incredible flame of possibility, not just for theater at large but for this particular show. The physical world lives and so there is possibility that we could breathe life into it again

When I think about what was specifically lost I think of the literal; the cast was not able to experience their regular closing. There were audiences planning to come—many of whom I am sure have never seen Baldwin’s theatrical work live and in person. This is perhaps the biggest loss. I feel that Baldwin is one of the greatest artistic, intellectual, and political minds of the western world. That more people have not experienced his plays is a travesty. His work is classic, his work is American. It should be celebrated on every stage in the country. So those shows that were prematurely cut meant that more people could not experience his voice in this form.

When I asked Dan what he learned he said, “We experienced the joy of bringing the show into the space, but also the question of how to build on and develop the connection of the production and the audience. I’m thinking about how translating the show from the rehearsal room to the theater was positive, but how of course the larger space and the change in the size of the audience altered the dynamic.” Indeed, this intimate and fragile world that these beautiful Black people habit in The Amen Corner had to be exploded to this Greek level so that every audience member could experience the story.

When thinking of what will live on, we hope that the production will be revived. And at the very least that more artists around the country will look to Baldwin’s words. And also, the memory of the final run-through in the rehearsal room before we stepped into the larger space. There was such communal feeling among the cast and creatives. Whatever hurdles come our way as artists and Americans, that memory will always live on.

Remembering Pass Over at Studio Theatre
By Psalmayene 24

On Sunday, March 15, 2020, two days after DC banned gatherings of more than 50 people, Studio Theatre closed its production of Pass Over. We were scheduled to run through April 5 with early talks of a possible extension on the table. When we terminated the show, none of us could have scarcely imagined that nearly nine months later we would still be in the throes of a global health pandemic. We also could not have predicted that in a few months a reinvigorated Black Lives Matter movement would have demanded the attention of the world.

Antoinette Nwandu’s Pass Over is a beautifully written and keenly provocative play that seemed to strangely foreshadow both the coronavirus pandemic and the horrific killing of George Floyd. With its invocation of plagues and summoning of cosmic retribution for the wanton destruction of Black lives, it felt as though the ethos of the play had escaped the confines of Studio’s Metheny Theatre and announced itself on the global stage.

When our production was forced to suspend performances, the DC theater community lost out on an opportunity to wrestle with an exquisitely challenging work of art. We lost out on a chance to peer within ourselves and examine the true measure of our feelings about the value of Black lives. We lost out on having conversations about Pass Over that would begin the moment you realized the performance was over and continue on until you got home—and would perhaps keep going as you climbed into bed to go to sleep that night.

The keystone lesson I’ve learned from the premature closure of Pass Over is that we were taking life as we knew it for granted—especially the privilege of creating and attending live theater. Given the dizzying number of things that have to go right in order to bring a play to life in front of an audience, it’s a miracle that any play gets produced anywhere at all. But I guess that’s what we do as theater makers—we conjure miracles.

I believe that the memories of our production of Pass Over will live on in the minds of those who were lucky enough to experience it. I also believe that the urgent necessity to create plays that depict Black people in truthful and humanizing ways will also live on. And, despite this disorienting interruption, I believe that the human impulse to make theater that matters will most definitely live on.

Special thanks to Colleen Kennedy at Shakespeare Theatre Company and Mike Fila at Studio Theatre for their assistance with this feature. 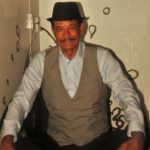 A credentialed professional photojournalist, Malcolm Lewis Barnes is the publisher of DMV202ARTS, whose mission is to expand the reach of the DMV Creative Community and showcase local artists, events, and venues. He welcomes the opportunity to partner with DC Theater Arts.