Silver Spring Stage’s streaming production of Lobby Hero is a pleasure to watch. Filmed on the theater’s stage, it combines the joys of seeing actors physically interacting together with some of video’s camera tricks. Directed by Rob Gorman, Kenneth Lonergan’s 2000 play, recently revived on Broadway, feels even more relevant nowadays.

All the actors give a realistic complexity to their roles. Conor Patrick Donahue brings a youthfulness to Jeff, a security guard working the night shift in an apartment building. He jokes around a bit with his supervisor William (Marquese K. Johnson), but also pushes back at some of his criticisms. When Johnson fires him for supposedly sleeping on the job, Donahue softly but firmly challenges him, forcing Johnson to relent. Making conversation with police officer Dawn (Kimberly James) while waiting for her partner, he reveals embarrassing facts about himself, like how he finds female officers “sexy,” and sleeps behind an open newspaper, awakening when someone comes through the front door or the elevator bell dings. Despite these awkward moments, Donahue creates an intimacy with the other characters, allowing Johnson to share his moral dilemma about his brother, and Dawn to reveal how difficult it is to be a woman on the police force. Even Bill (Ronald Ward), Dawn’s partner, shares how he plays on Dawn’s admiration. This intimacy puts Donahue in a difficult position, leading to an explosive encounter toward the end, forever altering their relationships with each other.

Marquese K. Johnson gives William a slight air of self-righteousness, determined to play by the rules and get ahead that way. He scoffs at Donahue for his seeming unambitious attitude and some of the things he does. Listening to him confide in Donahue, he conveys his anguish as he wonders what the right thing to do is when his brother is questioned for his possible involvement in a terrible crime, and he is asked to confirm his brother’s alibi. He asks Donahue what he would do and tells him about his discovery of the justice system, how public defenders have too many cases to keep straight and how Black men like he and his brother get caught up in the legal system. He speaks carefully and cautiously with Ward, not committing himself to anything while trying not to sound suspicious.

Kimberly James brings a vulnerability to Dawn. Talking with Donahue while waiting for her partner, she tries to head off his advances, asking him to “please shut up.” Learning from him that her partner is having an affair, she stifles her tears as she reveals her complicated feelings for him. Later, she finds herself in a difficult situation with Ward, sharing that with Donahue. When Donahue reveals what he knows about Johnson’s brother, she becomes an officer, forcefully questioning him until he agrees to share it with the department. She gives a powerful, complex performance, making the audience sympathize with her while also condemning her breach of trust.

Ronald Ward gives Bill a hidden nastiness. A celebrated officer, respected by the force, especially by Dawn, he comes across initially as modest and charming, if a little superior, breezing by Donahue on his way up to “visit a friend” without signing in the logbook. Later, though, in conversation with Donahue, he shows how he feels about women on the force, how he must “build up her confidence.” After Donahue reveals what he knows about Ward, he walks close to Donahue, a threatening tone in his voice. He threatens James as well, suggesting that she “be nice” to him. And yet he approaches Johnson differently, sympathizing with his dilemma and helping him out.

Set Designer Maggie Modig has created a set that ingeniously allows the performers to be both indoors and “outside,” as well as keep their distance from each other. A large wrap-around desk is on the far right for Jeff to sit at, while on the left is a large window for the audience to see the action “outdoors.” A door is on the far left. In between, facing each other, are ledges for the actors to sit. There is lots of empty space onstage, even when all four actors are together.

Costume Designer Lena Winter has fashioned simple outfits that help distinguish the characters. Jeff, Bill, and Dawn all wear uniforms of light and dark blue. At the end, Dawn is in civilian clothes. William wears a suit and tie.

Lighting Designer Jim Robertson darkens the “outdoors” to look like late at night, while the indoors is bright enough to be able to see everything. Sound Designer Lori Barringer ensures the dialogue can be clearly heard, including everything said “outdoors.” She also throws out sound effects that add to the realism of the set, like an offstage elevator bell.

Video Producer, Editor, and Projections Designer Brad Tehaan has done a wonderful job filming this production, making sure all actors are seen clearly. Closeups are used occasionally. In between scenes, an animated city scene is shown, the sun rising and setting to indicate a next day. 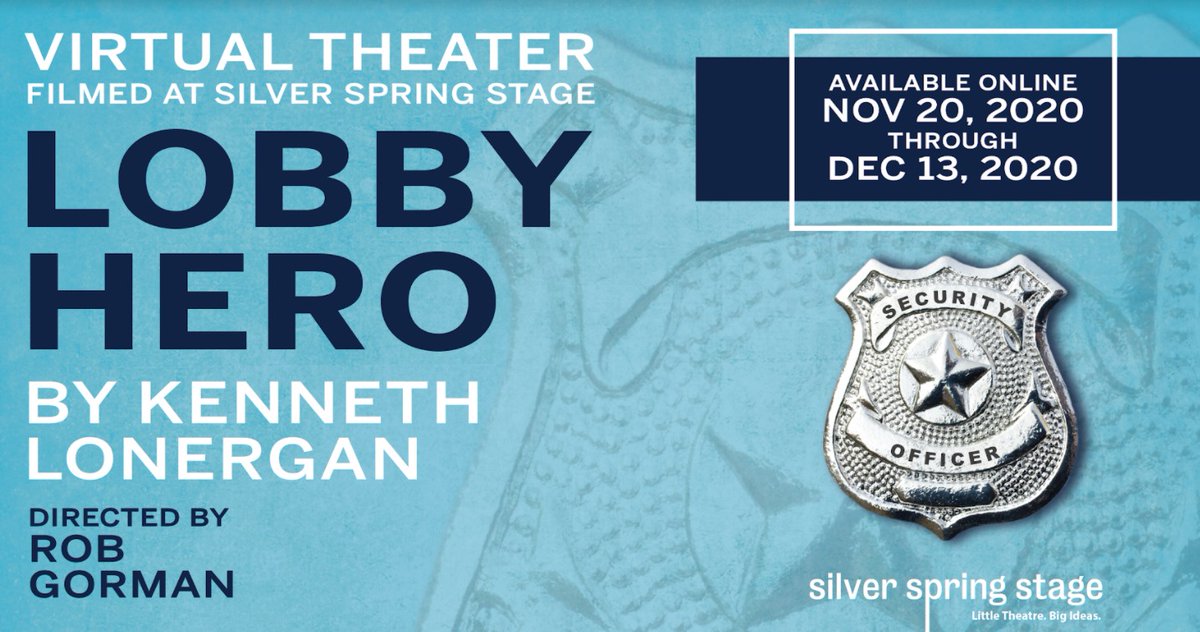 Rob Gorman does an excellent job as director. The actors navigate the stage and each other expertly. Except for brief moments, they stay apart from each other, and yet this distance feels intrinsic to the play. The few times they get close to each other, it brings an emotional charge onstage. Lobby Hero uses deeply human, flawed characters to ask profound questions about race, the police, and justice. Be sure to catch it while you can!

Running Time: Approximately 2 hours and 30 minutes, with a five-minute intermission

Lobby Hero is available for streaming on the Silver Spring Stage website through December 13, 2020. For information on the current season and productions available to rent, please visit their website.