As the holidays approach, the internet is lighting up with a selection of special shows to stream this week. Among them are a medievalizing experimental Off-Off-Broadway mainstay, a naughty Off-Broadway comedy in verse inspired by a children’s classic, and an alt-cabaret favorite updated for 2020.

Fools Mass – Conceived, directed, and designed by Matt Mitler, this year’s 22nd annual roving production of Dzieci Theatre’s signature holiday show, which routinely sells out its stop at The Cathedral of St. John the Divine, was livestreamed on Sunday, December 5, from Bushwick’s recycling center and community hub Sure We Can; by popular demand, a recording of the live performance will be available for streaming from December 10-17. Set during the plague years of the 14th century – a period that resonates in our own pandemic time – the experimental 50-minute piece celebrates the miracle of life and the enigma of death in its search for the sacred through the medium of theater, as a group of village idiots and lost souls enact their own mass after the untimely passing of their beloved pastor. Overflowing with humor, heart, and a message of grace, the performance features sublime choral singing, ridiculous comic buffoonery, and transformative dramatic invention. For tickets (priced at $12 per device), go online. 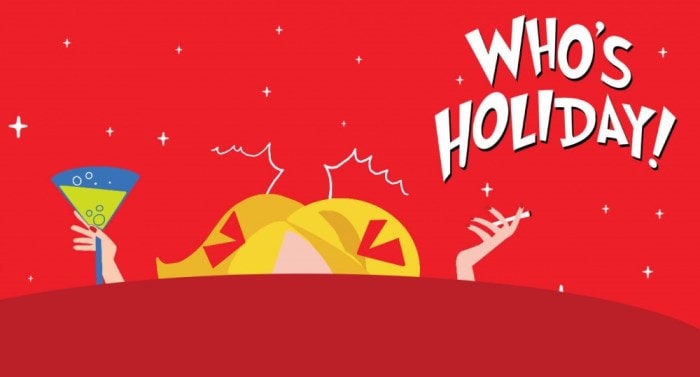 Who’s Holiday – Broadway powerhouse and Oliver Award winner Lesli Margherita (Matilda The Musical; Dames At Sea; Zorro) stars as the now grown-up and down-on-her-luck Cindy Lou Who – preparing to host a Christmas Eve party in her trailer on Mount Crumpit, while reflecting on the strange turn her life has taken over the past 40 years – in the saucy one-woman original sequel to Dr. Seuss’s iconic children’s book How the Grinch Stole Christmas. The critically-acclaimed Off-Broadway hit, written in raunchy rhyming verse by Matthew Lombardo, directed with zing by Carl Andress, and delivered to foul-mouthed perfection by the hilarious and heartwarming Margherita, was filmed by David Kane during its premiere 2017 engagement at the Westside Theatre and will be presented online for the first time at 8 pm, on Friday, December 11. The one-hour stream, available through Tuesday, December 15, is free, but donations are welcome to benefit Broadway Cares/Equity Fights AIDS.

Taylor Mac Holiday Sauce . . . Pandemic – Following the release of Taylor Mac’s new Holiday Sauce album on November 13, the sensational multi-hyphenate, MacArthur Fellow, and 2020 Ibsen Award winner (the first American to receive the honor, for bringing new artistic dimensions to the world of theater) returns to the stage with a virtual pandemic-time reimagining of the eponymous seasonal cabaret created by Mac and Pomegranate Arts. Commissioned by The International Ibsen Festival, The Norwegian Ministry of Culture, and The National Theatre of Oslo, and conceived as a post-modern queer alt-variety show for an adults-only audience, the vaudevillian-style entertainment features “music, film, burlesque, and random acts of fabulousness,” along with the subversive message that there’s “more to the holidays than rampant capitalism and gift giving.”

As it has been since its debut in 2017, the show is dedicated to the late Mother Flawless Sabrina (Mac’s drag mother), and, as a tribute to her, each presenting venue (including NYC’s Park Avenue Armory) will honor an individual who has made a significant contribution to nurturing the local queer community. Taylor Mac Holiday Sauce . . . Pandemic! will be livestreamed at 7 pm, on Saturday, December 12, and will be available on demand from December 13, 2020-January 2, 2021. For tickets, go online; access to the premiere performance will be distributed to advance ticket holders by email on December 12.