Off-Broadway’s Irish Repertory Theatre continues its 2020 online season with a new digital production of Meet Me in St. Louis, a show last presented on stage by the company in 2007. The familiar piece of traditional Americana – inspired by the 1989 Broadway musical of the same name, the eponymous 1944 MGM film starring Judy Garland, and author Sally Benson’s original 1942 novel The Kensington Stories – follows a year in the life of the upper-middle-class Midwestern Smith family, as their city anticipates the opening of the 1904 World’s Fair.

Irish Rep Co-founder and Artistic Director Charlotte Moore (who appeared as the wife and mother Anna Smith in the Broadway production) adapted, directed, and narrates the condensed virtual version of the two-act show (with a running time of approximately 85 minutes, plus an intermission), which, despite the post-modern medium in which it’s presented, retains the old-fashioned sensibility of the era, replete with its social mores, outmoded etiquette, and dated dialogue.

The nostalgic mood of the book (by Hugh Wheeler) is reinforced by the transporting design, with period-style props, screen shots of vintage photos, postcards, and calendars, and a digital backdrop of the interior and exterior of the family’s Queen Anne Victorian house (scenic design by Charlie Corcoran), over which the individual actors’ remotely taped performances are skillfully superimposed (editing by Meridith Sommers). There’s even a hat, tool, hug, and kiss passed across the screens of the socially distanced actors, whose dress and hair are also historicizing, if not always fully authentic (costume consulting by Tracy Christensen).

The old-time narrative for all ages contains common familial struggles with change, romance, misunderstandings, and childish pranks. And the old-school characters are typed to fit their simple situations and storylines: the domineering head-of-household Alonzo Smith (played by Rufus Collins); his obedient wife Anna (Melissa Errico); their likeable and accommodating son Lon (William Bellamy); their love-struck older daughters (Shereen Ahmed as the glowingly innocent Esther; Ali Ewoldt as the pretentious Rose); their initially hesitant and uncommunicative suitors Warren Sheffield (Ian Holcomb) and John Truitt (Max Von Essen); the younger misbehaving Smith girls (Kylie Kuioka as the fibbing prankster Tootie; Austyn Johnson as her sidekick Agnes); their loving Grandpa (Jay Aubrey Jones); and the spirited Irish maid Katie (Kathy Fitzgerald). They, along with the minor supporting figures of Lucille Ballard (Kerry Conte), the postman, trolley man, and Richard (all performed by Ashley Robinson), deliver the ever-timely messages of being honest and kind, listening to one another, and making sure to “appreciate what you have.”

What truly makes the show an enduring classic is the music, from the titular 1904 song “Meet Me in St. Louis” (lyrics by Andrew B. Sterling, music by Kerry Mills) to the richly romantic “The Boy Next Door” and “The Trolley Song” to the beloved holiday favorite “Have Yourself a Merry Little Christmas” (all written by Hugh Martin and Ralph Blane for the 1944 film). Now standards in the Great American Songbook, they, and the other expressive musical numbers (including Tootie’s silly “I Was Drunk Last Night” from the original movie, and Katie’s “A Touch of the Irish,” added by Martin and Blane to the 1989 Broadway production – and well-suited to the work of Irish Rep), are beautifully performed by the diverse cast of outstanding vocalists (the precociously talented Kuioka and Johnson among them) and a top-notch seven-piece orchestra (conductor John Bell on piano, Jeremy Clayton on woodwinds, Joshua Mark Samuels on percussion, Karen Lindquist on harp, Suzy Perelman on violin, Melanie Mason on cello, and John Convertino on bass – who also provide rich musical interludes at the top of each act), under the music direction of John Bell and orchestrations by Josh Clayton.

As with all of the offerings in the 2020 season of #IrishRepOnline, the sound design and mix (M. Florian Staab), lighting (by Michael Gottlieb), and streaming technology are expert, so if you’re in the mood for a touch of the past and a stirring collection of masterfully sung and played songs, you and the whole family can enjoy Meet Me in St. Louis for the holidays. 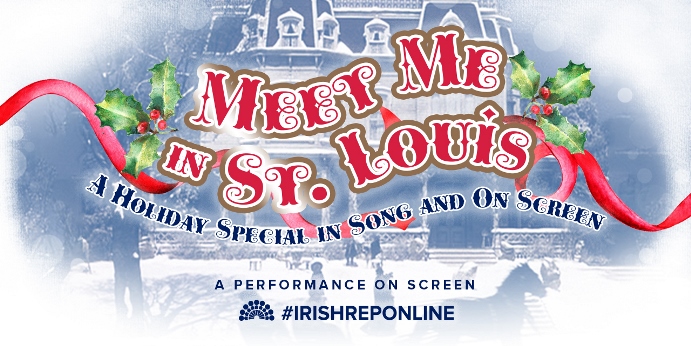 Meet Me in St. Louis streams through Saturday, January 2, 2021, at Irish Repertory Theatre. Reservations are required to access the pay-what-you-can digital event (with a suggested price of $25). For reservations, go online.