With the holidays upon us, digital events are in full swing, offering a variety of seasonal productions to suit every taste. These five picks for the week present a wide range of themes, styles, and options for entertaining and enlightening viewing. 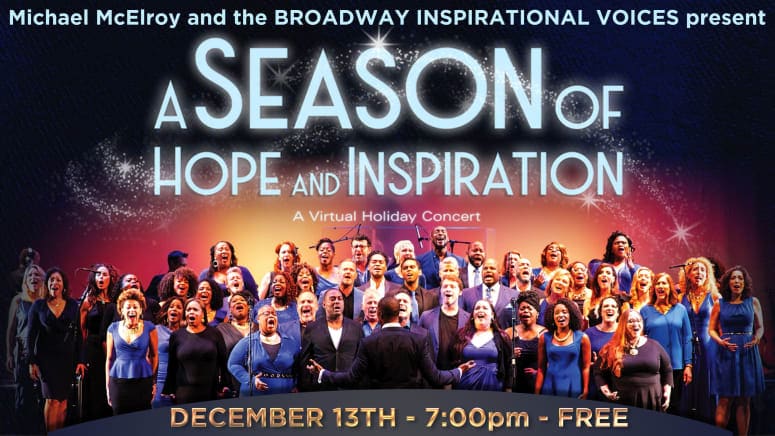 A Season of Hope and Inspiration – Founded by Michael McElroy in 1994, Broadway Inspirational Voices is a diverse professional choir of Broadway and Off-Broadway artists united to change lives through the power of music and service. Though this year’s free holiday concert is virtual, it offers BIV’s signature message of “hope and inspiration” by coming together though uplifting song in this difficult time of isolation.

Broadway Inspirational Voices’ A Season of Hope and Inspiration streams live on Stellar, on Sunday, December 13, at 7 pm. Reserve your free ticket here, or make a donation for a ticket that includes a pre-filmed pre-show event, beginning at 6:30 pm, with Andrea Burns, Liz Callaway, Norm Lewis, Leslie Odom Jr., and Michael James Scott, available exclusively for American Express Card members. The minimum suggested donation is $10, and all proceeds go to BIV. The concert will continue to be available for viewing on Broadway on Demand through Tuesday, January 5, 2021. 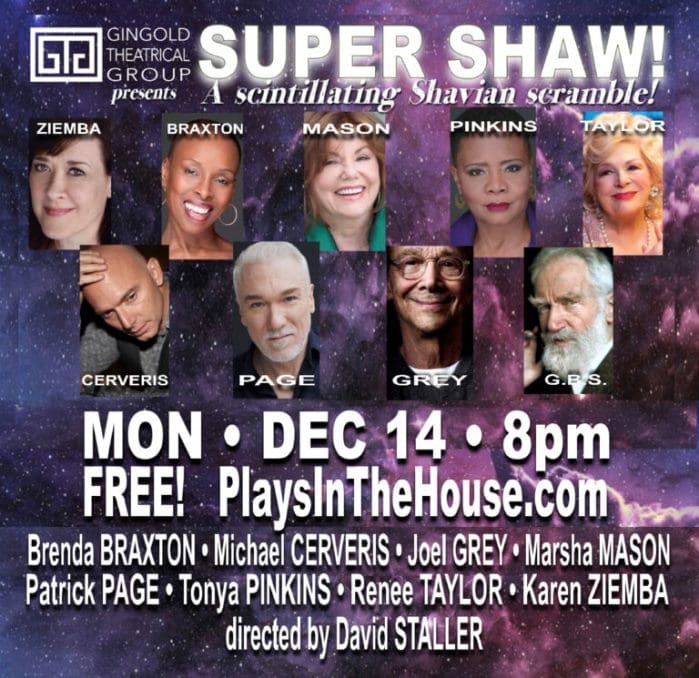 A Super Shaw Event! – Hosts Seth Rudetsky and James Wesley of the popular online series Stars in The House will air their next installment of Plays in the House (presenting free live readings of classic award-winning plays for the duration of the coronavirus pandemic, until theaters reopen) on Monday, December 14, to benefit The Actors Fund. The special performance of “mixed and matched and mashed” scenes, monologues, and poems by George Bernard Shaw is their seventh and final partnership with Gingold Theatrical Group (which will produce and present future readings), all adapted, directed, and narrated by GTG Founding Artistic Director David Staller.

“To celebrate the end of what has been the most bizarre year ever, I’ve asked some friends to a party in which we’ll kick some of our favorite moments from the Shaw canon around. Anything goes. You’re all invited. The prospect of sharing Shaw with this singularly spectacular group of actors has me on the edge of my seat,” says Staller. The live broadcast features the all-star cast of Brenda Braxton, Michael Cerveris, Joel Grey, Marsha Mason, Patrick Page, Tonya Pinkins, Renee Taylor, and Karen Ziemba, who are sure to keep you on the edge of your seat, too.

A Super Shaw Event! premieres on Monday, December 14, 8:00 pm, and will remain online for four days after the initial live broadcast, through Friday, December 18. To view, visit the Stars in the House YouTube channel.

The Dybbuk – For this month’s 100th anniversary of S. Ansky’s iconic Jewish play, about the possession of a young bride on the eve of her wedding by the eponymous malicious spirit of her dead love, the New York-based Congress for Jewish Culture (founded in 1948) is offering a virtual presentation with an international cast of luminaries to celebrate the historic milestone. Based in Hassidic folklore and years of research in shtetls in Russia and Ukraine, the story was written first in Russian in 1914, and later translated by Ansky into Yiddish, the language in which it debuted in 1920, a month after the playwright’s death.

The Dybbuk streams on Monday, December 14, at 7 pm, on the Congress for Jewish Culture’s YouTube channel. Viewing is free for everyone. 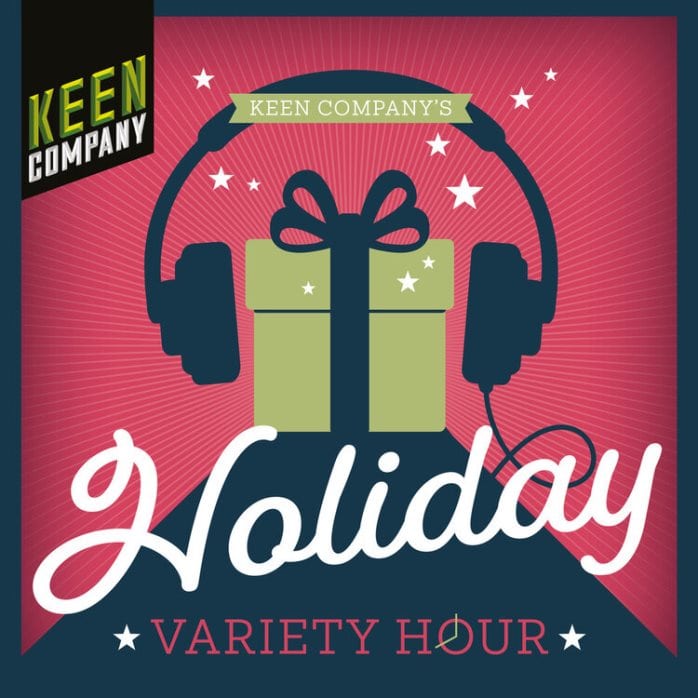 Keen Company’s Holiday Variety Hour – On Tuesday, December 15, Off-Broadway’s award-winning Keen Company presents a special live fundraising event that will pay tribute to variety shows of the 1970s. Artistic Director Jonathan Silverstein announced, “We had a wonderful time working with our generous and talented friends . . . Even though we may not be able to gather this season, The Keen Variety Hour will give our patrons a unique way to connect and revel in the holiday spirit.” Written and directed by Billy Recce, the evening features a full line-up of Keen alumni and Broadway stars singing songs, telling stories, reciting poems, and sharing their holiday memories and favorite recipes.

Keen Company’s Holiday Variety Hour streams live on Tuesday, December 15, at 6:30 pm; a recording of the livestream premiere will be available for viewing through Tuesday, December 22. The broadcast is free, but viewers are welcome to donate as part of Keen Company’s “31 Days of Giving” challenge, to help the company raise $31,000 by December 31st. To watch the show, and to make a donation, go online.

Home for the Holidays – Conceived and hosted by Jelani Remy from Broadway’s Ain’t Too Proud – The Life of Times of The Temptations, the show, with writing and direction by Eric Ulloa, music direction by Jaime Lozano, and a stellar line-up of stars from the New York stage, reaffirms the old saying that “there’s no place like home for the holidays.” Produced by and benefitting Broadway Cares/Equity Fights AIDS, the free virtual concert, streaming from the homes of the socially distanced cast into ours, features songs based on their own family traditions and those of the settings of the musicals in which they’ve appeared, from Come From Away‘s Newfoundland to The Lion King’s Africa, and a tone ranging from comedic to heartfelt.

Home for the Holidays streams free, beginning at 8 pm, on Tuesday, December 15, and will be available through Tuesday, December 19, on the Broadway Care/Equity Fights AIDS website. Donations and VIP sponsorship are welcome, to help those across the country affected by HIV/AIDS, COVID-19, and other critical illnesses, and to support and champion organizations focused on social justice and anti-racism.