This week will see the debut of three original new works, all redesigned for digital presentation during the continuing coronavirus pandemic. One is part of Audible’s collaboration with the 2020 Williamstown Theatre Festival, and two are the latest offerings in Off-Broadway’s wild project season. 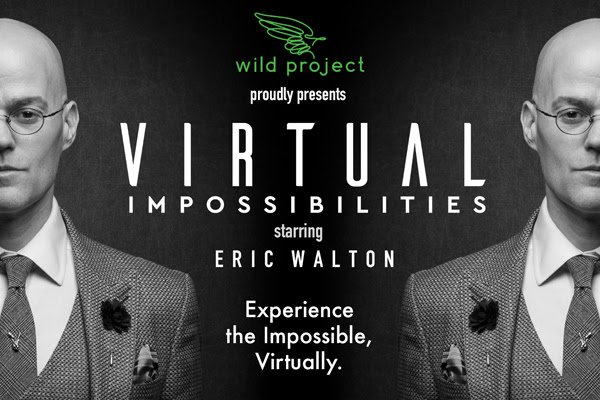 Virtual Impossibilities – For more than two decades, award-winning showman Eric Walton, one of NYC’s top mentalists, has performed his astonishing feats of magic and mind-reading Off-Broadway and at venues and festivals throughout the US and the UK. This week, he brings the world premiere of his newest interactive show of mystery arts online, so be prepared to have your mind read, and your mind blown, for a fully immersive hour of exciting mental acuity, engaging audience participation, material adapted from his vast live repertoire to suit the virtual format, and original routines specifically tailored for the digital platform. Virtual Impossibilities will be streamed live at 8 pm, December 16-20, then on Saturdays at 3 pm and 8 pm in January and February, from Manhattan’s wild project. Running time is 60 minutes. For tickets (priced at $20 per household), go online; a Zoom link will be emailed to you on the morning of the show.

Animals – The newest release in the Williamstown Theatre Festival’s 2020 season of audio-plays on Audible is a world-premiere dramedy by actress and Emmy-nominated writer Stacy Osei-Kuffour (PEN15). Directed by Brooklyn-based Obie Award winner Whitney White (Our Dear Dead Drug Lord), the new play features Aja Naomi King (ABC-TV’s How to Get Away with Murder), Jason Butler Harner (the Netflix series Ozark), Madeline Brewer (The Handmaid’s Tale on Hulu), and William Jackson Harper (NBC’s comedy The Good Place) as two inter-racial couples confronting their unsettled relationships at an increasingly uncomfortable dinner party. Exacerbated by wine and weed, insults fly, tensions mount, back-story entanglements are revealed, and all four are left to consider their identities, their dreams, and their futures together. Running approximately 95 minutes, Animals will be available for listening beginning on Thursday, December 17, on Audible.

TREES: A New Musical – Originally scheduled to debut on April 2, 2020, as a full-length live musical at La MaMa, the opening was postponed due to COVID19, and the show was trimmed down to 30 minutes for digital presentation. Inspired by Peter Wohlleben’s international bestseller The Hidden Life of Trees, the new work, with music and lyrics by New York-based visual and performance artist Mur (who also directs, provides the sound mixing, animation, and film editing, and performs with Aisha Karensa, Haley Fortune, Jade Litaker, and Nyah Raposo), is conceived as a “musical witness statement” addressing climate change, deforestation, and the true story of the destruction of our planet. Produced by wild project and filmed at the company’s eco-friendly theater and gallery, the original piece gives audiences a “Greta Thunberg-meets-Sondheim” glimpse into a dystopian future through the voices of the last remaining trees on earth. ​TREES streams on demand from December 18, 2020-January 1, 2021, on Stellar​. Tickets​ ​are $15 per household, available online.