Presented as part of the virtual 2020 Williamstown Theatre Festival, the world-premiere audio-play release of transgender writer, performer, and activist Shakina Nayfack’s Chonburi International Hotel & Butterfly Club on Audible delivers a powerful and transformative narrative for her characters and listeners alike. Originally developed during Nayfack’s 2017 Beatrice Terry Artist-in-Residence Fellowship with The Drama League in New York, the new semi-autobiographical work tells the story of an international group of transwomen who come together at the titular locale in Thailand, where they struggle and bond over their shared life-changing experience of gender confirmation surgery.

Nayfack’s script – loosely inspired by Edna Ferber and George S. Kauffman’s 1936 play Stage Door, which follows the frustrations and triumphs of a group of aspiring actresses who connect at a boarding house in NYC, where they’ve come to achieve their dream – is brimming with both true emotion and significant information. In addition to the playwright’s camp humor and drama, there are timely conversations about the use of preferred gender pronouns, the resistance and lack of acceptance by those who are not personally affected, and what it means to be a woman, along with detailed descriptions of the surgical procedure, the challenges of post-op recovery and care, and an understanding of the accompanying inconveniences and pain, all of which serve to develop the characters’ journey and to inform audiences unfamiliar with the real-life issues at hand.

The affecting play also contains heartwarming messages about the need for faith (whatever yours may be), the value of a safe haven, and the importance of community, which together offer the relief of love, support, and empathy, and the joy and release that come with being, and affirming, who you are.

Directed with spirit and sensitivity by WTF Associate Artistic Director Laura Savia, the takeaway sentiments, and the variety of international accents and ethnicities (with dialect coaching by Barbara Rubin and Joy Lanceta Coronel, Riw Rakkulchon serving as cultural competence consultant, and backed by Joanna Fang’s evocative sound design) are delivered by a convincing ensemble of performers from the stage and screen (Ivory Aquino, Kate Bornstein, Liz Lark Brown, Samy Figaredo, Annie Golden, Bianca Leigh, Telly Leung, Dana Aliya Levinson, Pooya Mohseni, Shakina Nayfack, Angelica Ross, Ita Segev, and Jason Tam). The excellent cast features nine transgender actors, including Nayfack, who stars as the central protagonist Kina. Though at first alone, she becomes increasingly open and attached to the diverse but united sisterhood of the hotel, with whom she ultimately finds camaraderie and comfort, and celebrates her sense of self and her renewed love of life.

For me, the two most invaluable gifts of the theater are entertainment and empathy. This heartfelt and compelling audio-play offers both.

Running Time: One hour and 44 minutes. 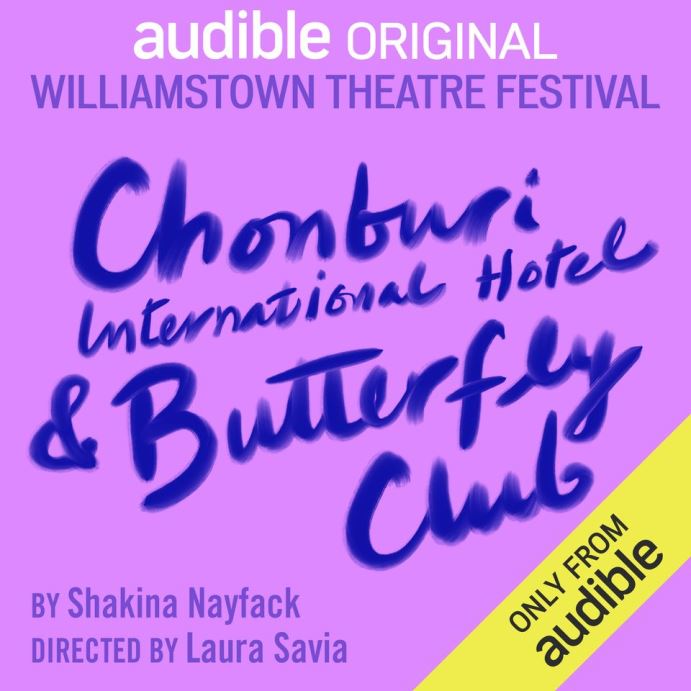 Chonburi International Hotel & Butterfly Club is available for streaming beginning at 3 am, on Tuesday, December 29, in the 2020 Williamstown Theatre Festival on Audible. To listen, go online.