Hot off of winning the 2020 John Aniello Award for Outstanding Emerging Theatre Company, the 4615 Theatre has created a multifaceted solution to meet the challenge posed by the pandemic. For the first half of 2021, the company will present a slate of original programming across a variety of mediums, from telephone calls to video games. Dubbed ​4615 GO​, ​the series of works can be experienced in any location and will explore novel methods of theatrical storytelling. 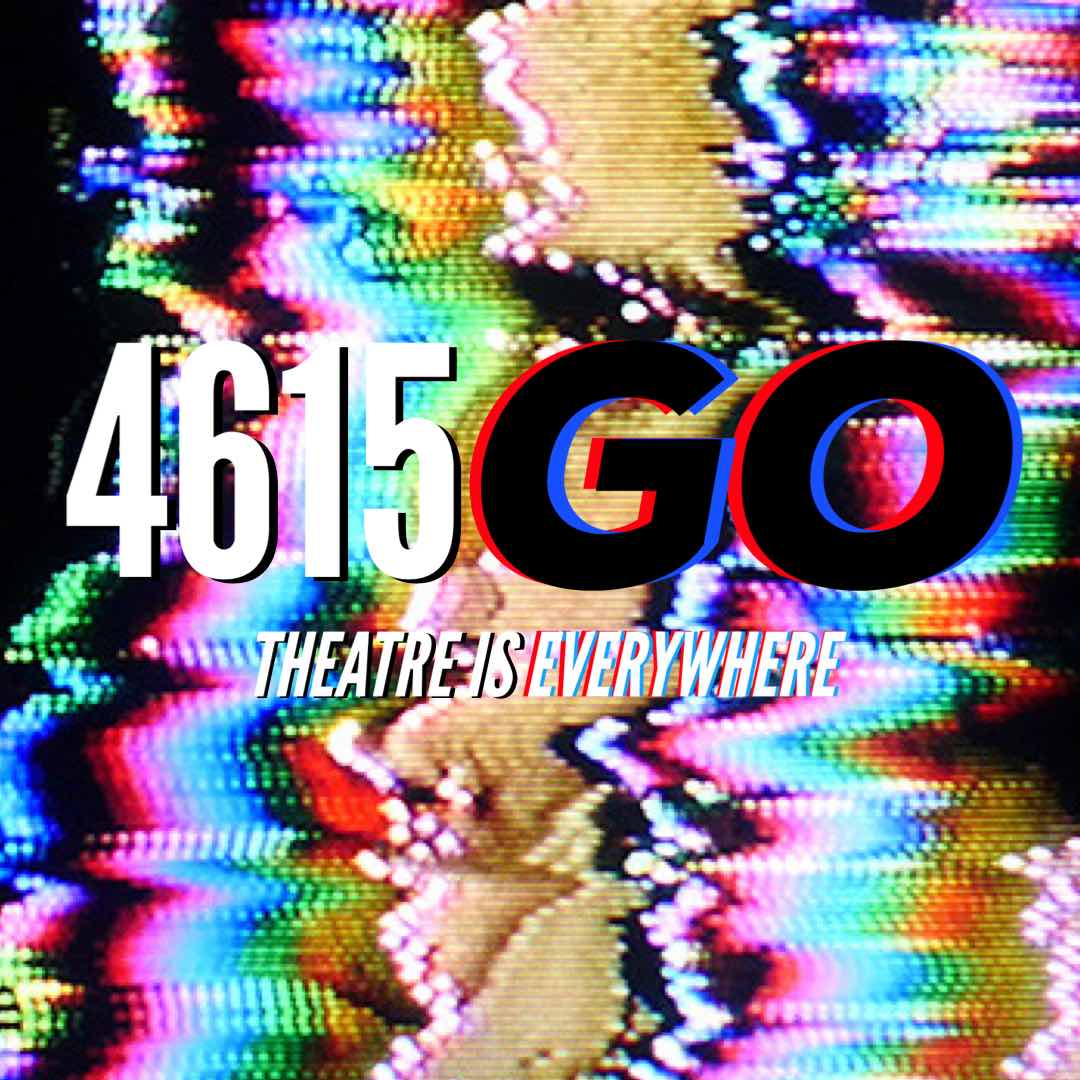 “After a busy summer of virtual new play festivals, we went back to the drawing board and asked ourselves how we could recapture the spark that drives us all to tell stories,” said Founding Artistic Director Jordan Friend. “We wanted to break free from the self-imposed need to make something that felt adjacent to the theater we know, and instead make something that captured what makes theater so special in the first place.” Friend notes that the first breakthrough came when Producing Director Gregory Keng Strasser proposed an original video game, which snowballed into an interactive virtual concert by Friend, a telephone play-for-one by guest playwright Britt A Willis, and an ongoing tabletop gaming series produced by resident artist Jon Jon Johnson. Throughout the programming, the company will host regular discussions, open to the public, about how the spirit of theater has manifested itself in new and innovative ways. 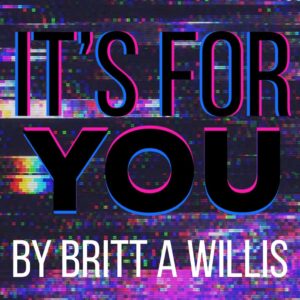 In keeping with 4615’s fondness for repertory productions, two solo performance pieces will perform in tandem. The first is ​It’s for You​​ (January 29 to February 28)​, a disarming experience entirely over the telephone, created and performed by local playwright ​Britt A Willis.​ Only 20 tickets will be available for the initial run. A sole audience member for each show will receive a phone call from the playwright, then spend an hour in conversation, constructing an original poem together. ​Willis, who first self-produced the piece in October, describes the experience as feeling like “someone handing you the landline when unexpected phone calls were still an exciting thing, or that third hour in your first overnight conversation with a new crush.” They cited their inspiration for ​It’s for You​ as a desire “to create a performance that was both safe during a pandemic and gave the feeling of close access to another person’s interiority that first drew me to theater.” 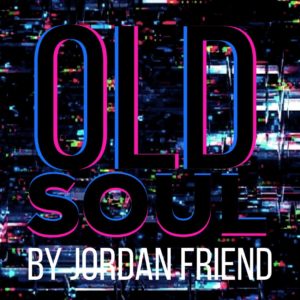 In rep with Willis’s piece is​​ Old Soul​​ (February 11 to March 7)​, an all new “narrative concert” by 4615 Artistic Director ​Jordan Friend​. During a group video call with an intimate audience size, Friend will perform a series of original songs, woven together by an autobiographical story of what Friend calls “a quarter-life crisis that reached biblical levels of weird.” Unlike most virtual concerts, which stream the performer to an anonymous, mass audience, ​Old Soul ​will capture the intimacy of a small, cabaret-style show at the back room of a bar, with Friend and the audience members able to see and hear each other throughout. “This piece was always intended to premiere after the pandemic,” said Friend, who developed the idea for a virtual workshop after sharing the piece virtually with a small group for feedback. “It stirred up this warmth and closeness that I’ve been missing terribly as a songwriter since lockdown started, and a communal feeling I know many theatergoers are longing for. We’re huddling together in the dark of winter for a good story.” 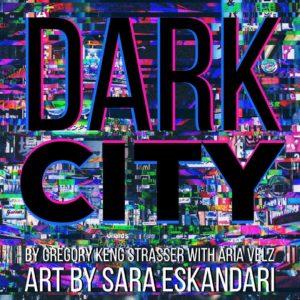 Following these two performance pieces in alternative mediums, the company will pivot to an entirely new form with the release of ​Dark City​ (beginning April 9), ​an original, episodic video game conceived, written, and programmed by 4615 Producing Director ​Gregory Keng Strasser.​ Using a simple point-and-click interface, ​Dark City ​will be accessible to experienced and first-time gamers alike, with a robust focus on storytelling and world-building. In a fusion of the nostalgic style of “Choose-Your-Own-Adventure” games with an ambitious parable about corporate corruption, players become both audience and actor as they experience and shape the world of Aeolus City, a solarpunk utopian metropolis hiding a shocking secret. “2020 was the year I learned extensively about dark money’s role in politics and how influential those dollars can be,” said Strasser, who took inspiration for the story from Malaysia’s 1MDB scandal, as well similar events in the United States. On creating a video game for a theater company, Strasser proposed that the medium is more theatrical than even film, due to the agency given to the audience in driving the experience. He calls this game “a chance to demonstrate the spirit of theatricality and its influence over the arts…to innovate the field and entangle the theater in new sectors so that we can see how vital the arts are in collaboration, democracy, civic affairs, and more.” 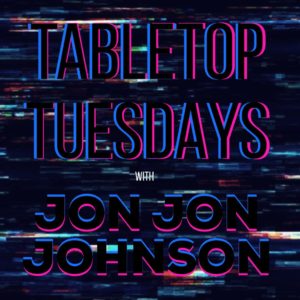 Alongside these offerings, 4615 will produce an ongoing slate of recurring content, generated by the company’s team of resident artists, and designed to explore other modern mediums descended from theater. The first of these is ​Tabletop Tuesdays (beginning January 12), ​a livestreamed program hosted by Jon Jon Johnson and presented, free to the public, on Facebook and Twitch. Johnson is a professional “Dungeon Master” who creates and runs highly acclaimed sessions of the popular live action role playing game, Dungeons and Dragons, and here he brings his skills to 4615’s virtual platform as a fusion of tabletop gaming and improv theater. A rogue’s gallery of popular local artists will invent and play out the events in a fictional world inspired by past 4615 productions. Johnson says the project was inspired by the massive increase in the popularity of role-playing games among artists during the pandemic, calling them “​a method for us to collectively tell a story. I derive so much pleasure from these collaborative sessions with other artists, and I think it simply must be shared.”

With such a wild variety of new mediums, audiences may wonder what the future holds for 4615, and the company’s artists are eager to see how they broaden and enrich their theater’s possibilities. “We are returning to the in-person stage as soon as it’s safe, absolutely no question,” said Friend. “Theater is what we do, and we can’t wait to do it again. Until then, rather than wrestle with what does or doesn’t count as theater, we’re throwing caution to the wind, and chasing what inspires us as storytellers. When we do come back to the physical stage, we hope this new journey will have left us with many new tricks up our sleeves.”

Playwright Britt A Willis describes their audaciously intimate solo theatrical experience as “an approximately hour-long one-on-one phone conversation with me, Britt. I play myself, you play your​self, and together we’ll talk about our environments, our feelings, and some poetry I just can’t get out of my head. We’ll also create a new poem together.” ​It’s for You ​feels like someone handing you the landline when unexpected phone calls were still an exciting thing, or that third hour in your first overnight conversation with a new crush.

Conjuring a smoky backroom concert in virtual form, ​Old Soul ​is a narrative concert of original songs, woven together by the harrowingly funny story of songwriter Jordan Friend’s “quarter-life crisis from Hell.” Engaging directly with small group audiences over video call, Friend brings soaring melodies and sharp lyrics to life in a unique setting that shatters the barriers created by online performance. A fusion of musical theater, stand-up and a touch of mystery, the virtual presentation of ​Old Soul​ is like huddling around the piano for songs and stories on a dark winter night.

A PERFECT CITY. A PERFECT CRIME. ​​Before his big sister died, Judaa had it all: an education, job prospects, and a gorgeous apartment in Aeolus City’s hippest district. But in a matter of a year, everything was taken from him. Haunted by his sister’s death, and frustrated by the city’s tepid response, he leaves altogether — trying to move on. But when an investigative journalist from an Indigenous tribe shows up on his doorstep, looking into his sister’s role at her former employer, the Aeolus Investment Organization, new revelations emerge. What did his sister know? And what is the AIO planning for the city’s future? From the shadowy underbelly of the city to the highest echelons of power, Judaa uncovers a scandal so massive that nearly everyone may have had a part to play in. Fusing a retro, “choose-own-adventure” interface with powerhouse storytelling by a team of theater artists, ​Dark City ​is a bold new step for 4615 Theatre Company, and a gaming experience for new and seasoned players alike.

A wild blend of role-playing games and improv theater, ​Tabletop Tuesdays ​is an all new live series from DC theater artist and professional “Dungeon Master” Jon Jon Johnson. Tune in as Jon Jon and a rogue’s gallery of local theater artists use popular tabletop games such as Dungeons and Dragons to conjure an epic, ongoing story based on the worlds of past 4615 productions. A delight for both fans of the genre, and anyone who enjoys watching storytellers create something new in real time, ​Tabletop Tuesdays ​is where 4615’s “Expanded Universe” will come to life before your eyes.

TICKETS
Season passes are available now and will include a ticket to ​Old Soul​ and all four episodes of ​Dark City ​at a discount, as well a ticket to ​It’s for You ​while supplies last. Individual tickets to Old Soul ​and ​It’s for You ​will go on sale in January, and episodes of ​Dark City ​will become available to purchase in April. Passes and individual tickets can be purchased at 4615theatre.com.

4615 Theatre ​began when a group of undergraduate theater artists staged a Jacobean tragedy in multiple rooms of a suburban home. In just a few years since, the company has rapidly expanded from backyards and basements into a thriving professional theater, a hub for both reinvigorated classics and ferociously bold new works. 4615 creates “inverted epics”: large, narrative-driven stories brought to new life in an up-close setting. The company produces curated seasons of theater, uniting wildly diverse material through shared themes, and maintains a team of resident artists, whose work the company is dedicated to nurturing and supporting.