“I have wanted to introduce Ryan Haddad to the DMV ever since I got to Woolly. He is a captivating storyteller who charms anyone he meets within seconds,” said Maria Maneula Goyanes, Artistic Director at Woolly. “Hi, Are You Single? asks us to examine sexuality through the lens of a queer man with a disability who is struggling to make meaning out of intimate interactions. That in itself is a radical shift in perspective. Oh, and if you’d like to take him on a date, I’d be happy to set you up!”

Why watch? Here’s the pitch:

Ryan has a higher sex drive than you. He also has cerebral palsy. You can often find him on Grindr or at your local inaccessible gay bar. Join writer/performer Ryan J. Haddad on his search to find love. Or a date. Or at least a hookup. From encounters with drag queens to platonic lap dances, Ryan will guide you through the gay dating scene with his provocative take on intimacy, rejection, and judgment. His one request? Please bring an attractive male friend with you.

Stefanie Black and Katie Lowes, Co-Artistic Directors of IAMA Theatre Company explain: “Since we announced Ryan as the recipient of IAMA’s 2020 Rhimes Unsung Voices Playwriting Commission, we have been beyond excited to share his wholly unique voice with the IAMA and global theater communities. Ryan’s humor and strength come through in every word he writes. There isn’t a more charismatic writer/performer at this moment, and to be able to partner with Woolly on this exciting production is a dream for IAMA.” 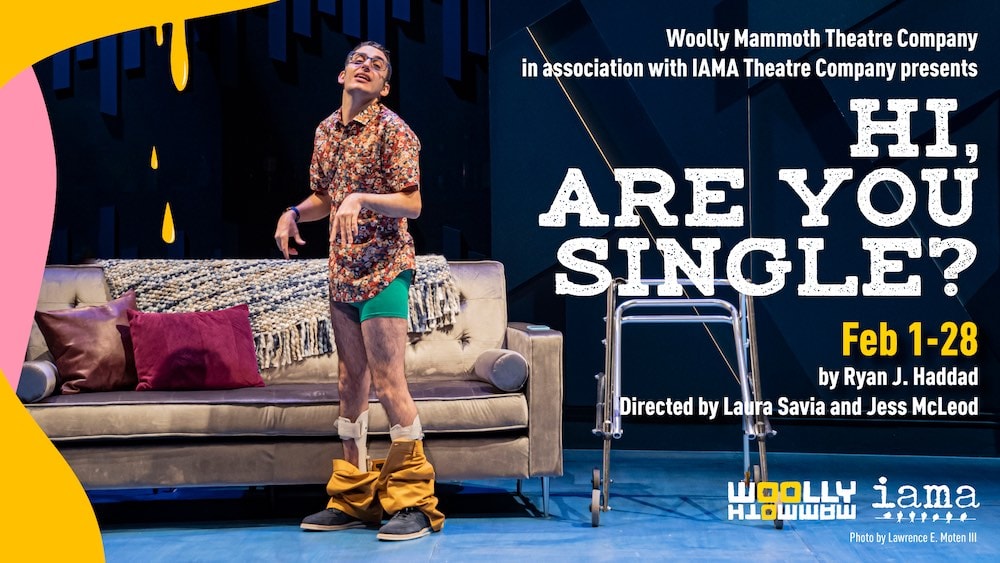 Woolly Mammoth is “the hottest theater company in town” (Washington Post); priding itself on developing, producing, and making theater that disrupts conventional processes and stimulates transformative experiences. For almost four decades, Woolly has held a unique position at the leading edge of the American theater, earning a reputation for staying “uniquely plugged in to the mad temper of the times” (New York Times). The co-leadership of María Manuela Goyanes (Artistic Director) and Emika Abe (Managing Director) is supported by a core company of artists that holds itself to a high standard of artistic excellence. Woolly is relentless in its desire to take risks, experiment, innovate, interrogate, and create a radically inclusive community. Located in Washington, DC, Woolly Mammoth stands upon occupied, unceded territory: the ancestral homeland of the Nacotchtank whose descendants belong to the Piscataway peoples.

Designated by Playbill as “one of 20 regional houses every theater lover must know,” IAMA is a Los Angeles-based ensemble of artists committed to invigorating live performance for a streaming generation. Through cutting-edge, cool and hyper-modern stories, IAMA is invested in the immediacy of production and strives to bring audiences out of their personal space and into a shared experience. The Ovation award-winning company has seen many plays generated at IAMA travel to off-Broadway, Second Stage and the Roundabout Underground, then go on to be performed regionally and internationally. IAMA members have been featured in numerous critically acclaimed TV shows and films as well as in a vast array of theater and live performances all over the country, including off-Broadway and Broadway. IAMA has been dedicated to developing new plays and musicals by emerging and established playwrights since 2007.

RYAN J. HADDAD (Writer/Performer) is an actor, playwright, and autobiographical performer based in New York. His acclaimed solo play Hi, Are You Single? was presented in The Public Theater’s Under the Radar Festival and continues to tour the country. Other New York credits include My Straighties (Ars Nova/ANT Fest), Noor and Hadi Go to Hogwarts (Theater Breaking Through Barriers), and the cabaret Falling for Make Believe (Joe’s Pub). Regional credits include The Maids, Lucy Thurber’s Orpheus in the Berkshires (Williamstown Theatre Festival), and Hi, Are You Single? (Guthrie Theater, Cleveland Play House, Williamstown Theatre Festival). He has a recurring role on the Ryan Murphy Netflix series “The Politician.” Additional television credits include “Bull,” “Madam Secretary,” and “Unbreakable Kimmy Schmidt.” Haddad has performed original work at La MaMa E.T.C., the New Museum, and The LGBT Center of New York City. His plays in development include Good Time Charlie and Dark Disabled Stories. He is an alum of The Public Theater’s Emerging Writers Group and a former Queer|Art Performance and Playwriting Fellow, under the mentorship of Moe Angelos. Learn more at www.ryanjhaddad.com and follow him on social at @ryanjhaddad.

LAURA SAVIA (Director) is making her Woolly Mammoth debut. She is the Associate Artistic Director of the Tony Award-winning Williamstown Theatre Festival.  For WTF, directing includes the world premieres of Shakina Nayfack’s Chonburi International Hotel and Butterfly Club (with Audible), James Anthony Tyler’s Artney Jackson, Lucy Thurber’s Once Upon a Time in the Berkshires and Orpheus in the Berkshires; other directing includes Lucy Thurber’s Unstuck (59E59/Throughline) and Bareknuckle (Vertigo Theatre), Ryan J. Haddad’s Hi, Are You Single? (The Public Theater and The Guthrie), James Lecesne’s The Absolute Brightness of Leonard Pelkey (City Theatre), and Jonathan Caren’s The Recommendation for IAMA (Ovation Award, Best Production). Alumna of Drama League and Northwestern University. www.laurasavia.com

COLIN K. BILLS (Lighting Designer) is a Woolly Mammoth Theatre Company Member and an active member of Woolly’s equity, diversity, and inclusion working group. He has lit over fifty productions  at Woolly Mammoth, including Fairview, Gloria, Botticelli in the Fire, An Octoroon, Black Side of the Moon, Oedipus el Rey, Clybourne Park, and Dead Man’s Cell Phone. As a Conspirator with the devised theater company dog & pony dc, he collaborated in the writing, direction, and design of A Killing Game and Beertown. His designs have been seen at nearly every theater in the Washington, DC, region, as well as nationally and internationally. Colin has won three Helen Hayes Awards and is a recipient of a Princess Grace Fellowship in Theater. He is a graduate of Dartmouth College.