One of the most highly acclaimed productions of the 2019-20 season, A Strange Loop, which made its Off-Broadway debut at Playwrights Horizons, earned multiple awards, including Best Musical from the Drama Desk, New York Drama Critics’ Circle, and Off-Broadway Alliance, nominations from the Lucille Lortel and Drama League Awards, honors from the Outer Critics Circle, and a special citation from the Obies.

In addition, the sold-out hit garnered the 2020 Pulitzer Prize for Drama for its playwright Michael R Jackson (book, music, and lyrics) – the first Black writer to win for a musical, and the first musical to win without having played on Broadway – after being recognized previously with a Jonathan Larson Award and a Lincoln Center Emerging Artist Award in 2017, and Hull-Warriner and Whiting Awards in 2019. The show’s original cast recording, which reached #6 on the Billboard Cast Albums chart, was released on Yellow Sound Label in late September 2019, and in December 2020, the book version of the history-making work was published by Theatre Communications Group (TCG) and is now available in paperback and eBook editions.

The concept, as the protagonist tells us, is grounded in American scholar and cognitive-science professor Douglas Hofstadter’s term for the brain’s cyclical structure of conceiving one’s self through abstract hierarchical levels of symbols that always return to where they began. It’s also the name of one of the character’s favorite Liz Phair songs, in Jackson’s smart and satirical musical-theater fusion of human psychology and pop culture.

Filled with unapologetically explicit language, actions, viewpoints, and humor, the incisive script and lyrics give theater-goers an inside look at one playwright’s idiosyncratic anxiety-laden creative process, identity crisis, and self-therapy, as he tries to work through the absurdities, conflicts, and pain of writer’s block, social stigmas, and self-esteem. It’s a compelling read and a blockbuster professional debut for Jackson, which will make you anxious (in the best way) for its return to the stage once theaters can reopen. 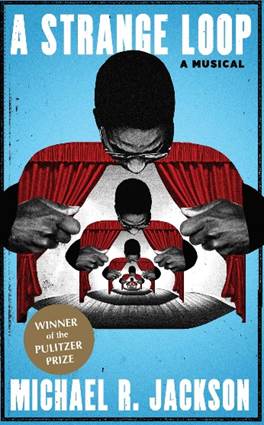