Given the ongoing pandemic and challenges to safely presenting live performances, Studio Theatre has taken its five-play season entirely digital. Productions will be filmed in Studio’s intimate spaces to capture a high-quality in-the-room experience, with safety precautions in place for artists and production crew in compliance with Actors’ Equity Association guidelines.

“This unprecedented time for theaters has also created moments for experimentation in how we work, create theater, and reach audiences,” said Studio Artistic Director David Muse. “Since closing our doors in March 2020, Studio has livestreamed events, commissioned artists to make guerilla-style cell phone videos, and released our very first audio plays. As we take our season online, we’re working to translate the intimacy of our spaces in the digital realm. Each of these shows offers a unique opportunity for its theater artists and I’m excited to share this work in a new mode.” 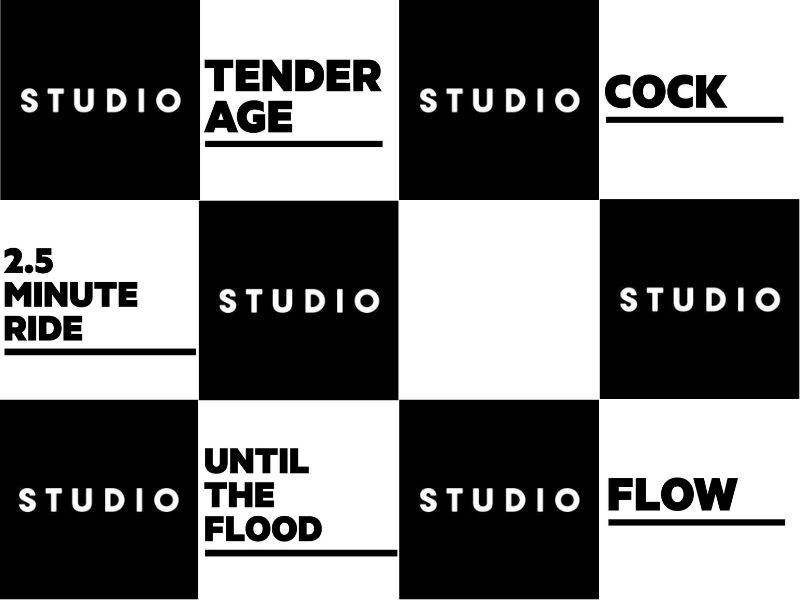 Muse will direct the first streaming production, a remount of Studio’s 2014 Helen Hayes Award–winning production of Cock by Mike Bartlett, a whip-smart comedy about identity, sexuality, and determining the path forward amidst uncertainty. Following is Pulitzer Prize finalist Dael Orlandersmith‘s Until the Flood; in his directorial debut at Studio, Associate Artistic Director Reginald L. Douglas reimagines this solo performance about pain and resilience in Ferguson, Missouri, with a multigenerational cast of three Black women.

The season will then focus on a trio of striking solo performances with particular resonance, beginning with Tony Award winner Lisa Kron‘s autobiographical, Obie Award–winning 2.5 Minute Ride directed by Joanie Schultz, about the intertwined stories of her father, a Holocaust survivor and roller coaster enthusiast. Artist in Residence Psalmayene 24 will direct hip-hop theater forebear Will Power‘s percussive Flow, a tribute to the power of stories and the importance of storytellers, with one actor embodying the characters, accompanied by a mix from a DJ spinning live. The season concludes with Tender Age, a new play by George Brant (author of Grounded, Studio, 2014) about the moral reckoning of an ICE subcontractor who discovers he’s guarding not hardened criminals, but school-aged children.

Patrons and subscribers will be able to watch productions on demand through Studio’s website during designated 3-week streaming windows. Subscriptions are now available online; single tickets will be released closer to the opening dates of individual productions.

John breaks up with his boyfriend of seven years. Two weeks later, he’s desperate to be taken back—but can’t stop sleeping with the woman he started seeing in their weeks off. In a world with so many ways to be happy, how do you know the right thing when you have it? A sexy, conflicted look at attraction, ambivalence, and commitment. David Muse remakes his 2014 Helen Hayes Award-winning production for the camera.

Until the Flood
by Dael Orlandersmith
directed by Reginald L. Douglas
March 26 – April 18, 2021

When Michael Brown was shot by a police officer in Ferguson in 2014, the outrage and protests that followed were a wake-up call to some and familiar, exhausting news to others. Dael Orlandersmith draws from dozens of interviews across Ferguson’s communities in Until the Flood, using one specific flashpoint of race and power to look at the ongoing pain of a litany of Black deaths at the hands of police. Studio Associate Artistic Director Reginald L. Douglas reimagines Orlandersmith’s solo play with a cross-generational ensemble of three Black women, celebrating the resolve for justice that remains as urgent today as it was six years ago.

Lisa’s father is 74, nearly blind, a Holocaust survivor, and addicted to roller coasters. 2.5 Minute Ride follows two very different father-daughter trips: the annual Kron family pilgrimage to roller-coaster heaven in Sandusky, Ohio, and Lisa’s once-in-a-lifetime trip to Auschwitz with her father.  A travelogue through thrill and loss. Lisa Kron (book and lyrics, Fun Home) tracks her father’s enthusiasm, physical frailty, and ambivalence about the lives he might have lived with humor and unsentimental compassion.

Flow
by Will Power
directed by Studio Theatre Artist in Residence Psalmayene 24
May 21 – June 13, 2021

Will Power’s percussive look at one urban community and its seven storytellers, who gossip and riff, declare and reveal, showing off their neighborhood through its stories, from trivial to tragic. Backed by a live DJ and unfolding in rhythm and rhyme, Flow is a call and response through history, from the griot tradition to the next artists who will make the tradition for their times. Will Power toured the piece to Studio in 2004 and Doris Duke Artist in Residence Psalmayene 24 directs a new production for a new generation.

When Martín applies for a position at the local Walmart–turned–Detention Center, he expects to be supervising hardened criminals facing deportation. But he soon discovers he’s guarding a warehouse full of children, as young as his own, separated from their families at the nearby Texan border. Still, jobs are scarce, the graveyard shift pays well, and Martín is in no position to turn down a steady paycheck. But when a strange epidemic reaches the facility, he faces a moral reckoning. Stark and propulsive, Tender Age joins Brant’s Grounded (Studio, 2014) as a play about characters living at the edge of their ethics. (Supported by Studio R&D, Studio Theatre’s new-works initiative.)

Studio Theatre is Washington’s premier venue for contemporary theater, “where local audiences will find today’s edgiest playwrights” (Variety). One of the most respected midsized theaters in the country, Studio produces exceptional contemporary drama in deliberately intimate spaces. Drawing inspiration from great ensembles—where people work together with a spirit of generosity and professional rigor—Studio brings characteristic thoughtfulness and daring to its work onstage and off, through its new-work incubator and engagement, education, and workforce training initiatives. Founded in 1978, Studio today serves nearly 75,000 people each year, including more than 1,000 youth and young adults through community engagement initiatives. The quality of Studio’s work has been recognized by sustained community support, as well as 72 Helen Hayes Awards for excellence in professional theater.