Signature Theatre’s production of Simply Sondheim is a lovely tribute to one of America’s best composers and lyricists for the stage. Co-conceived by David Loud and Eric Schaeffer, and directed by Matthew Gardiner, it films performers singing a wide variety of Sondheim’s songs, in front of an orchestra, and wonderfully showcases both Sondheim’s talent and that of Signature’s singers and musicians.

The performers perfectly capture the emotion in each song. The opening number, “Merrily We Roll Along/Bounce,” seems to take on new meaning in these uncertain times, and they sing it with optimism and energy, giving it a true “lift.” Likewise, “Something Just Broke,” which opens Act Two, seems eerily relevant, and they give it a quiet melancholy, creating the feeling of isolation even while all onstage. Awa Sal Secka leads them in the next song, “Now You Know,” with a fierce determination to seize life even knowing its darkest moments.

The show explores themes in Sondheim’s work, with Awa Sal Secka giving a deeply emotional “All for You” from Saturday Night, followed by Emily Skinner’s quietly dramatic “Loving You” from Passion, and Norm Lewis’s passionately angry “Is This What You Call Love,” also from Passion, ending with a quietly powerful “I Wish I Could Forget You/Sextet.” Donna Migliaccio and Bobby Smith perform three songs from Follies, passive-aggressively arguing in “Country House,” Migliaccio filling “Could I Leave You?” with a rising anger, and Smith careening between excitement and desperation in “The Right Girl.”

Emily Skinner gives a biting satire to “The Ladies Who Lunch,” at one point yelling while raising her glass. Conrad Ricamora fills “Finishing the Hat” with deep feeling, showing the power and sacrifice of making great art. Katie Mariko Murray captures the indecision in “On the Steps of the Palace,” giving a wonderful resolution. Solea Pfeiffer gives “Not a Day Goes By” powerful emotion, while Emily Skinner is quietly powerful in “Losing My Mind”; toward the end they sing together. Donna Migliaccio joins humor with misery in “The Worst Pies in London.”

The performers also show Sondheim’s humor and cleverness. In “Impossible,” Bobby Smith and Nicholas McDonough play father and son switching from assurance to fear regarding romance. In “Getting Married Today,” Katie Mariko Murray and Christopher Mueller begin with a traditional joyful celebration, while Tracy Lynn Olivera, as the bride, fills her lyrics with quick, near-manic desperation, rapidly changing the mood. Conrad Ricamora Christopher Mueller effortlessly pass “Poems” between each other before joining together in the end. The performers give the rhythms in “A Weekend in the Country” a delightful sophistication, while also telling several stories in one song.

Music Director Jon Kalbfleisch expertly conducts the orchestra, keeping the music strong and present while never overwhelming the singing. Jonathan Tunick’s original orchestrations and David Loud’s vocal arrangements work well together. Director of Photography Justin Chiet and Editor James Gardiner use the best aspects of video work to capture the performance, with closeups of instruments playing during some transitions and scenes from previous songs showing in the final number. Matthew Gardiner does a wonderful job as director and choreographer. The performers keep enough distance onstage for safety precautions yet are close enough for duets and companywide songs to feel natural. They move throughout the whole production, whether dancing across the stage or standing in broken lines, giving the feeling of a live stage performance. Simply Sondheim also shows Sondheim’s songs can stand apart from their musicals. Fans will love the range of songs, and the connections made between many of them, while those new to the music will enjoy getting to experience them. Be sure to catch it!

EXTENDED: Simply Sondheim streams on demand through April  16, 2021, in HD on Marquee TV. Single tickets are $35 and can be purchased online. Once viewing has begun, the show will be available to stream for 72 hours. Closed captions and an audio described version are available in English. For information on Signature’s full season of streaming features,  click here. 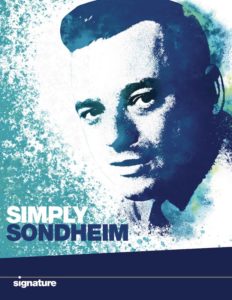 For a downloadable copy of the Simply Sondheim program, click here.