At the age of eighteen, Long Island native Andrew Barth Feldman has already far surpassed his Warholian fifteen minutes of fame and has a lifetime more coming. After winning the Best Actor Award at the 2018 National High School Musical Theatre Awards (widely known as the Jimmy Awards) at sixteen, he made his Broadway debut in the title role in Dear Evan Hansen shortly thereafter, and has recently been featured as Chef Alfredo Linguini in the viral sensation Ratatouille: The TikTok Musical, which raised $2 million to benefit The Actors Fund COVID-19 relief initiatives.

A fan of musical theater since he was three years old, Feldman appeared in local and school productions, and, in 2014, at the age of twelve, founded his own non-profit charitable company, Zneefrock Productions, as a Bar Mitzvah project to raise money for autism programs and research. Over the past year of the pandemic, the super-talented teen also created and leads the viral hit game series Broadway Jackbox and the unscripted interactive virtual murder mystery series Broadway Whodunit?, both of which feature his famous friends from the Broadway stage.

On Friday, February 5, the Broadway Podcast Network welcomes Feldman and members of the team behind the TikTok ‘Ratatousical’ – Greg Nobile (producer), Michael Breslin and Patrick Foley (executive producers and book writers), Daniel Mertzlufft (music arranger and song writer for one of the original songs not from TikTok), and Ellenore Scott (choreographer) – for a special live event, Deep Dive Broadway Ratatouille Edition, hosted by Tony Award-winning producer Dori Berinstein and supporting The Actors Fund.

At present, Feldman can also be heard in his recurrent audio role as himself (Science Consultant Andrew Barth Feldman) in the Broadway Podcast Network’s hilarious star-studded serial soap-opera parody As the Curtain Rises. In addition, you can always find him in his original new videos and performances posted on his very active YouTube channel and other social media platforms.

Andrew made some time in his ever-busy schedule to answer a quick fifteen questions about his flourishing career and his personal tastes, so his multitude of fans can get to know him a little bit better.

Andrew:  I’m still really new to the TikTok scene, but I think it’s created so well. You will find the thing for you, and you can post whatever you want. It encourages creativity in such a fascinating and beautiful way. It’s been such a joy to discover new artists through this platform.

I’m also really new to cooking, but I love making a good grilled cheese. Like, with mushrooms and stuff. You can’t really go wrong with grilled cheese. Pasta’s a reliable favorite, too.

Every time I order from Chipotle, I order two of the glass Coke bottles to save for later. So now, I have a bunch of glass Coke bottles in my fridge. Beyond that, there’s stuff from Blue Apron that we never used, and lots of milk that is typically used for making hot chocolate. I am a child.

I mean, if not Remy, then Mickey!

I think if you put these three people together, you get me. I have Alfredo and Evan’s anxiety, definitely, but also Alfredo’s blind confidence and Evan’s optimism. Then there’s the “Science Consultant” side of me, which is to say, I know far too much about the Disney Parks and I will yell at you about them for hours. I also love that character’s ‘doey-eyedness’ and I think that’s just a slight exaggeration of who I am in this industry.

In livestreams, anything can happen! We get to interact with audiences in real time! That’s theater! Podcasts are fun, too, because I can be sitting down in my pajamas.

Which one song or line have you written that best expresses who you are?

I think my song “Every Pretty Girl” really gets to the core of the swirling machinations of my brain. I was diagnosed with OCD shortly before writing that song, and I just wanted to write about what it was like to be young and to fall in love while having OCD. Every time I hear or sing that song, I realize something new about myself, which is really special.

The Haunted Mansion. Its history is just so rich and the feeling is pure magic.

My friend Alex Boniello. I’d go around his apartment and move all his stuff around so he’d have to fix it the next day.

Usually I spend that time with friends, and that’s changed somewhat, but not really! When the quarantine started, I created something called the Party Line. I’ll open the Zoom and whoever wants to come can come. We did it every night for six months, and we still do it all the time with almost 30 people in the group chat. They kept me sane throughout this whole thing.

Winning the Jimmy was probably the most unequivocally happy day of my life so far. I was so free of neuroses in that moment and just in total disbelief of what had just happened. I remember I was walking around the after-party holding a plate of mac ‘n cheese, just wandering, and some other nominee’s disgruntled father came up to me and said, “STOP LOOKING SO SURPRISED.” I really was so surprised.

I don’t know! I really try to be as transparent as I can, and I always have difficulty being anything but totally myself in any space. I guess they should know that I recently sifted through some archived photos and videos and found a bunch of really dumb videos from when I was in middle school, so they should be looking forward to that.

Famous is a BIG WORD! I don’t know if I’d call myself that, but I just love being able to make things and share them with people. Everything I’ve done this last year has really just been to distract myself, so it makes me so happy that it has provided some solace to people out there in the world, too.

Thanks, Andrew, for taking our 15-minute Pop quiz! Best wishes for 2021, and may the clock on your fifteen minutes of fame keep on TikToking! 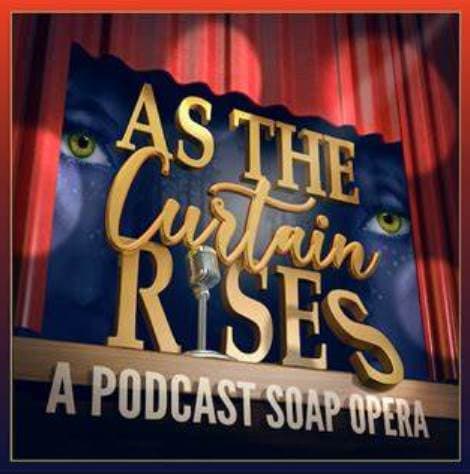 As the Curtain Rises plays on the Broadway Podcast Network. To access all episodes, go online.