Numbering among this week’s assorted streaming selections are a timely discussion, a revealing interactive phone call, and the remount of an iconic concert from the ‘60s. 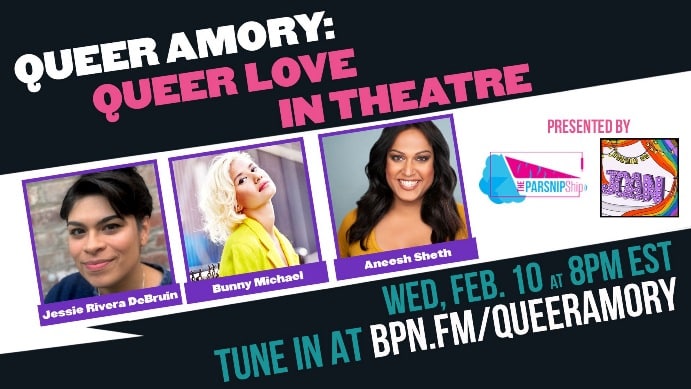 Queer Amory: Queer Love in Theatre – The Broadway Podcast Network (BPN), Thesis on Joan, and The Parsnip Ship are partnering to present Queer Theatre Family, a series of Town Hall events running through 2021, amplifying voices from the LGBTQ+ community in the New York performing arts scene by spotlighting queer theatrical families and what it means to find a home in the theater. The series begins with a discussion by queer artists about depicting the many dimensions of queer love in theater, from romantic love, to loving friendships, to the love of chosen families, to love through artistic collaborations. Artists will examine the history, or lack thereof, of queer love on stage, the challenges and freedoms that accompany writing about the subject, and what they hope to see in the future. The panel, hosted by Thesis on Joan‘s Meghan Dixon and Holly Sansom, along with Al Parker on behalf of The Parsnip Ship, features playwright and impact producer Jessie Rivera DeBruin, artist, writer, producer, actor, and musician Bunny Michael, and Indian-American actress and transgender activist Aneesh Sheth.

Queer Amory: Queer Love in Theatre will stream live on Wednesday, February 10, at 8 pm, on the BPN Live YouTube channel, and will also be available on both the Thesis on Joan and Parsnip Ship podcast feeds on Apple/iTunes, Spotify, Stitcher, iHeart, TuneIn, Deezer, Player.FM, Pocket Cast, Podcast Addict, and everywhere you listen to podcasts. 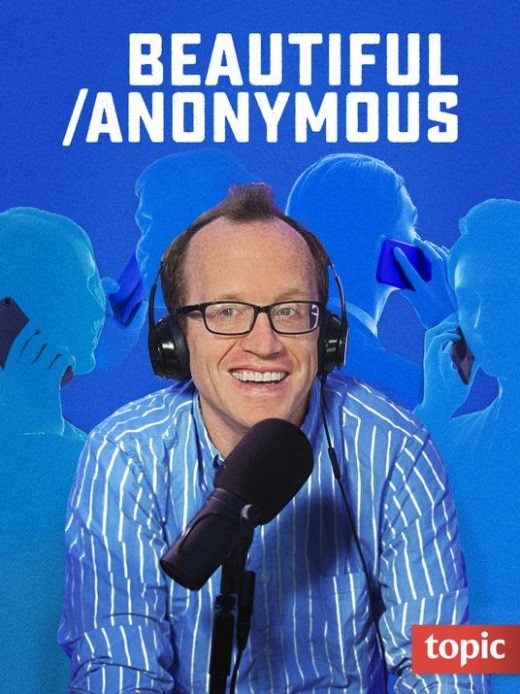 Beautiful/Anonymous – In his new Topic streaming series, based on the popular 2016 Earwolf podcast of the same name, host, comedian, and self-described “telephone call enthusiast” Chris Gethard (winner of the 2017 Webby Award for Best Host) tweets out a phone number and then has a half-hour conversation with the first anonymous caller to reach him. Each unpredictable weekly episode will feature a brutally candid no-holds-barred conversation with the innately curious and disarming Gethard, who can’t hang up, no matter what. What unfolds could be a shocking confession, family secrets, a therapeutic discovery, shameless self-promotion, a philosophical debate about an opposing view, or a series of funny and relatable stories. Be assured that anything can and will happen! The on-screen conversations will be enhanced with apropos imagery, such as still photos and video footage.

Beautiful/Anonymous airs on Thursdays, beginning on February 11, with its world-premiere Episode 1, on the new Topic streaming service. Subscriptions are required for viewing; to sign up, go online. 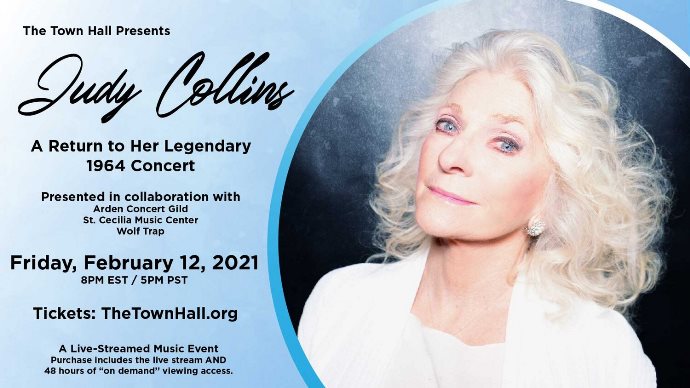 Judy Collins: A Return to Her Legendary 1964 Concert – Music icon Judy Collins returns to The Town Hall for a recreation of her 1964 concert hall debut there, with songs by Bob Dylan, Tom Paxton, Billy Ed Wheeler, and other folk classics. The award-winning singer, songwriter, and social activist, acclaimed for her imaginative interpretations of traditional and contemporary folk standards and her own poetic and poignant original compositions, evoked the idealism and determination of a generation united against social injustice and environmental catastrophe in the 1960s. Now, five decades and 55 albums later, Collins’ voice, in support of the work of the Multifaith Alliance for Syrian Refugees (MFA) – the nation’s leading interfaith response to one of the world’s worst humanitarian crises since WWII – continues to inspire both long-time fans and later generations. The special streaming event, filmed live on stage, will be released later this year on vinyl. Collins explained that, “Making this album and concert at The Town Hall – my very first solo appearance at one of the great concert stages in New York – was a relief and joyous event.  It feels right to go back to the material and time period now with the knowledge and life lessons learned in 2020.”

Judy Collins: A Return to Her Legendary 1964 Concert streams on Friday, February 12, at 8 pm, at The Town Hall. For tickets, priced at $40, go online. An email confirmation will be sent to you with a unique link to the view the event. Please note that you must use the same email used for purchase to access the livestream. The cost of the ticket, which allows an additional 48 hours of on-demand viewing access, reflects the desire to keep Ms. Collins’ band, crew, and technical support teams employed during this global crisis.