A co-presentation by JCS Theater Company and Spin Cycle, the world premiere of Adjust the Procedure, written and directed by Jake Shore (award-winning Off-Broadway playwright and Director of the Academic Advisement Center at St. Joseph’s College in Brooklyn, where he also teaches), addresses a number of serious issues in the business of higher education, which have become amplified with the outbreak of COVID-19. The timely new drama, conceived during the pandemic and set in the Fall of 2020, is structured in the now ubiquitous format of Zoom meetings, held by four administrators of a Manhattan university, which reflects the state of both digital academia and virtual theater in these historic times.

Tensions mount, threats fly, priorities become manifest, and truths are uncovered that could have serious consequences on the school’s administration, reputation, enrollment, and finances, triggered by the death of a student whose mother was lost to the coronavirus and whose father is a top executive at a major bank. As the two Zoom calls progress, significant questions arise. Was it suicide? Who knew? Was the lack of availability of the university’s Counseling and Wellness Center to blame? Has there been a veiled attempt to conceal the facts of his demise, as well as the number of COVID cases on campus, which “don’t add up”? Does it all amount to a grievous case of negligence?

The increasingly heated conversations are not solely specific to the pandemic. They raise other important points about larger problems, including the exploitation of adjunct faculty, the lack of forthright communication from the upper echelon, the philosophical argument that “free will doesn’t exist,” the expectation that the academic community should “stick together” and toe the party line, and the dereliction of duty by a bureaucracy that lets “things fall between the cracks,” in a general indictment of the “agenda” and “baseline morality” of the infected institution.

The conflicting attitudes and personalities of the characters are brought to life by the committed cast of four. Adam Files, as Kyle, the Director of Academic Development, takes the lead in the conversations. He is rightfully frustrated by the university’s ineffectual procedures, his colleagues’ apparent insensitivity to the student tragedy, and the overall lack of urgency he witnesses, becoming more impassioned and determined to bring these “internalized” problems to the surface.

Nicholas Miles Newton as Ben, Assistant Dean of Student Achievement, and Meagan Moses as Aimee, Director of Enrollment Management, seem more equivocal in their demeanors, evasive about what they might be aware of and initially hesitant to discuss the critical matters – perhaps for fear of reprisals. And Ed Altman as the Executive Dean, Frank, epitomizes the root of the problems, in his calculated and explosive responses to Kyle, and with the multiple reckonings for which the university will ultimately be held accountable by the people, the media, and the law.

The simple Zoom structure of Adjust the Procedure is smartly tailored to its theme and era, and the direction and delivery of its thought-provoking narrative pack a punch and leave us wondering what really drives our educational system and who benefits the most from it. 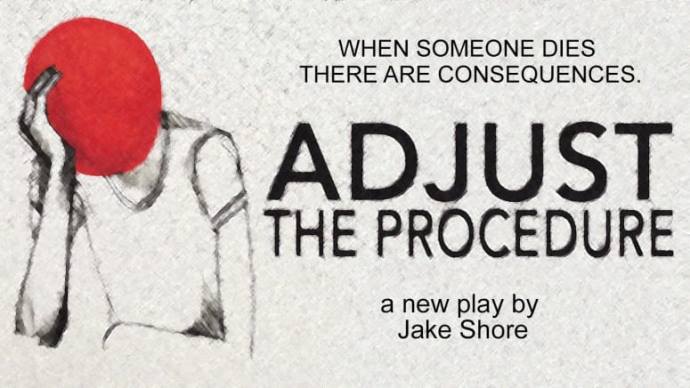 Adjust the Procedure, a co-presentation of JCS Theater Company and Spin Cycle, streams February 15-March 14, on Stellar. For tickets, priced at $10, go online.