On Sunday, February 21, beginning at 5 pm, Theater Resources Unlimited (TRU) – the leading non-profit network for developing theater professionals – presents its annual fundraising gala via Zoom as a virtual reinvention for our current times. TRUSpeak . . . Hear Our Voices! offers an evening of awareness through a curated selection of six short plays and musicals by TRU writers, producers, and directors, all touching upon current social issues.

According to Bob Ost, Executive Director of TRU and producer of TRUSpeak, “The shutdown has forced us all to rethink our business, our art, our assumptions about life itself. Social awareness has been thrust into the spotlight, and virtual presentation has become our strongest means of expression. We are excited . . . to use this new medium in interesting ways.”

The casts of the short works include such Broadway luminaries as Brenda Braxton (Tony nominee for Smokey Joe’s Cafe), Robert Cuccioli (Tony nominee for Jekyll & Hyde), Ann Harada (Avenue Q), Cady Huffman (Tony winner for The Producers), Jana Robbins (Gypsy), Lauren Molina (Rock of Ages), Crystal Kellogg (School of Rock), and stage and screen actress Regina Taylor (Golden Globe for I’ll Fly Away), along with a roster of Off-Broadway favorites and rising stars. There will also be special appearances by Broadway’s Jill Paice and Tonya Pinkins, and actress/activist Dominique Sharpton.

Each show will be introduced by former TRU honorees, including James Morgan (Producing Artistic Director of the York Theatre); two-time Tony winning director/ and choreographer Jerry Mitchell; performer, choreographer, and A Chorus Line legend Baayork Lee; and Tony-winning producers Ron Simons and Cheryl Wiesenfeld. An interactive talkback session will follow each piece, and VIP ticket holders are invited to a post-show meet-and-greet with the cast, the TRU Board, and other VIPs.

TRUSpeak . . . Hear Our Voices! streams on Sunday, February 21, 5 pm, on Zoom. Basic tickets are priced at $55, VIP tickets with the post-show meet-and-greet start at $90, and sponsorship opportunities begin at $1000. For more information and tickets, visit the website.

Maintaining its tradition of creating, developing, and producing the work of its company members, Off-Broadway’s award-winning LAByrinth Theater Company – founded in 1992, as The Latino Actors Base – begins seven nights of new play streamings on Monday, February 22, at 8 pm, in its 2021 Barn Series. This year’s developmental readings – all free and open to the public – comprise a selection of six original works (five of which were written and directed by LAByrinth company members), along with an evening of six short plays from LAB’s Intensive Ensemble.

“At a time when so much life has ground to a halt, we’ve been amazed and uplifted by the output from LAB artists and friends,” said Artistic Director Aaron Roman Weiner. “There’s a thread through these plays of characters searching for connection, for a way out of our many forms of isolation. These themes certainly resonate now, and the writers all bring incredible humanity, depth, and humor to the varied worlds they’ve created. This year’s Barn is a reminder that art is a tireless guide through difficult times, and I can’t wait to share these plays with our community.”

The schedule is as follows:

February 22, Wave Head by Joey Palestina – A tale of faulty intimacy is experienced by faulty humans moving through a world of faulty connection.

February 23, The War I Know by Dominic Colon – The first in a trilogy of plays that chronicle the impact of HIV/AIDS on the Latinx community from the late 1980s through the COVID-19 pandemic.

February 24, Intensive Ensemble Night – A series of workshops taught by LAByrinth members and guest artists that allows emerging artists to push their boundaries, to create their own work, and to be part of a collaborative vital new ensemble.

February 25, Wherever You Go by Elizabeth Canavan -The unimaginable has happened to Daisy and she thinks she is losing her mind, so she joins a support group and embarks on a radical journey risking everything to find her son.

February 27, Dani & Joe: A Gen X Love Story by Kristina Poe – A secret affair spanning decades, built on a desire for the ugliness in each other, finally faces itself in truth and consequences.

February 28, The Undertaking by Chris McGarry – Life studies of love, loss, and living are seen in Tom’s dismal trade of burying his fellow townspeople. 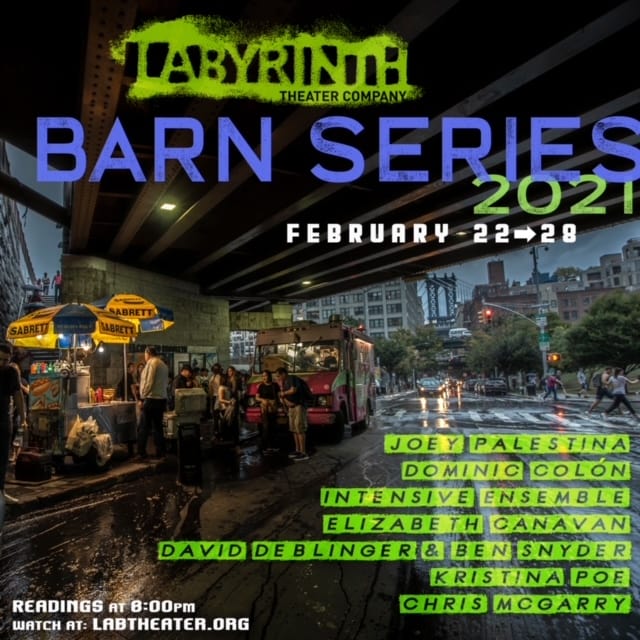 The 2021 Barn Series at LAByrinth Theater Company streams at 8 pm, February 22-28, 2021. Tickets are free, but reservations are required to receive a link for viewing. To register, go online; you only have to register once for the entire series.