In celebration of Purim next week – the spring festival held to commemorate the defeat of Haman’s plot to massacre the Jews, as recorded in the Book of Esther (also known in Hebrew as the Megillah, or “Scroll”), the Congress for Jewish Culture (a secular organization founded in New York in 1948, and dedicated to enriching Yiddish culture worldwide) and the National Yiddish Theatre Folksbiene (the longest consecutively producing theater in the US and the world’s oldest continuously operating Yiddish theater company, now in its 106th year) are offering a schedule of virtual programming.

To kick off the 2021 Purim week on Sunday, February 21, the Congress for Jewish Culture, in association with Mariella Productions, the League for Yiddish, and Toronto Workmen’s Circle, continues its International Virtual Yiddish Theater series with Megillah Cycle, presented free of charge, in Yiddish, with subtitle translations and interspersed English commentary written by the late lyricist Joe Darion (Man of La Mancha). The new production is based on Itzik Manger’s modernist take on the traditional Purim play.

In 1936, Manger published a cycle of poems that shattered time and history by updating the Biblical story of Queen Esther to 20th-century Eastern Europe. In 1965, with music by Dov Seltzer and under the direction of Shmuel Bunim, the Family Burstein opened a musical production of the cycle that started a new chapter for Yiddish in Israel, and then played at Broadway’s Golden Theatre in 1968. Mike Burstyn (star of the original show) has now adapted Manger’s poems and is reprising his roles as the Interlocuter and the master tailor Fanfose. He will also be performing his late father Pesach Burstein’s part as King Ahasuerus (Akhashveyresh), as well as directing the presentation.

Megillah Cycle plays on Sunday, February 21, at 2:30 pm, on the Congress for Jewish Culture’s YouTube channel, where it will remain indefinitely. Viewing is free; for more information, visit the website.

From Monday, February 22-Thursday, February 25, National Yiddish Theatre Folksbiene (NYTF) presents its 2021 Purim celebration Let’s Make Some Noise!, as artists and performers from around the globe come together virtually with a line-up of Yiddish music, cabaret, and a special Yiddish reading of the Megiles Ester (The Book of Esther). As noted by Artistic Director Zalmen Mlotek, “Amid the pandemic, National Yiddish Theatre Folksbiene is reaching audiences both close to home and around the world through dynamic and innovative programs that enlighten, that entertain, and that celebrate our culture.”

The upcoming Purim schedule is as follows: 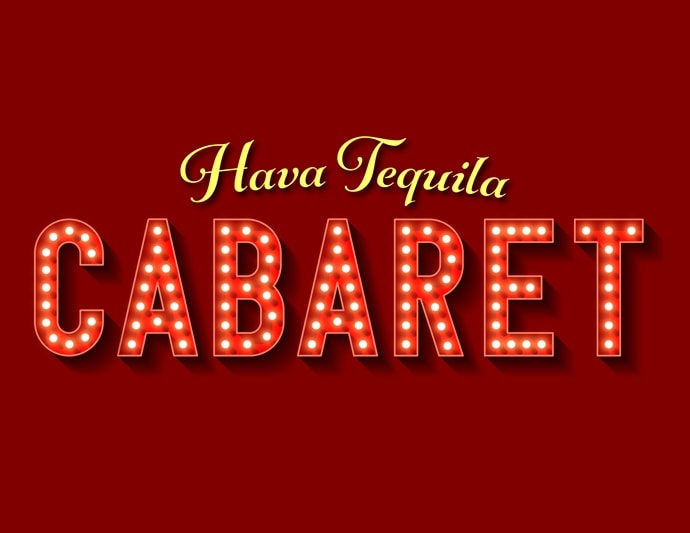 Wednesday, February 24, 7 pm, Hava Tequila Cabaret – The inaugural episode of NYTF’s new quarterly program, hosted by Adam B. Shapiro (Fiddler on the Roof in Yiddish) and presented as a benefit for the company, brings together a cast of young and emerging talents (including Dani Apple, Stephanie Lynne Mason, Lauren Jeanne Thomas, Bobby Underwood, Mikhl Yashinsky, and Daniella Rabbani, who will be joined by Michael Winograd for a duet). “Purim is a period for joyous celebration and so we’re proud to celebrate with an exceptional group of young performers who are part of the Folksbiene community – and in doing so, connect with communities from near and far,” said Executive Director Dominick Balletta.

Thursday, February 25, 7 pm, The Megillah in Yiddish – To close the festival, NYTF and the Museum of Jewish Heritage – A Living Memorial to the Holocaust will host a simkhe (celebration) in honor of Purim, led by Motl Didner. The event will feature a reading of the Megiles Ester in Yiddish, as translated by the great poet Yehoash, by an international cast (Rivka Augenfeld, Cantor Arianne Brown, Mendy Cahan, Jeanette Friedman, Rafael Goldwasser, Anna Fishman Gonshor, Zalmen Mlotek, Maia Morgenstern, Freidelle Mrocki, and Shmuel Atzmon Wirtzer). 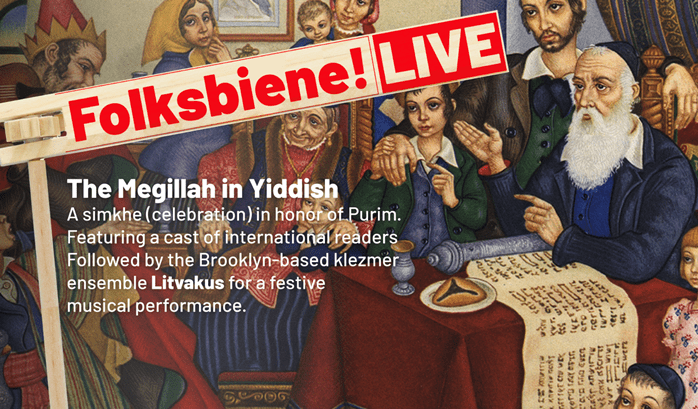 Following the reading, the Brooklyn-based klezmer ensemble Litvakus (Zoë Aqua, Taylor Bergren-Chrisman, Joshua Camp, and Sam Weisenberg, led by founder D. Zisl Slepovitch) will take the stage for a festive musical performance. The program also will feature a presentation by Ari Goldstein, Senior Programs Producer at the Museum of Jewish Heritage, of historic artifacts from the Museum’s collection, illustrating Purim and its role in 20th-century European Jewish communities. Donations are welcome.