In partnership with Van Dirk Fisher (Founding Artistic Director of the Riant Theatre/Strawberry One-Act Festival), Triangle Rainbow Productions Executive Director Anthony Fusco is presenting the company’s first annual LGBTQ Short Play Festival from February 27-March 7. The week-long series, consisting of three groups of world-premiere one-acts, features a variety of comedic and dramatic LGBTQ themes and characters. Each play runs approximately ten to fifteen minutes, with subjects that include everything from gay life in the ’80s to the concept of gender reveal. 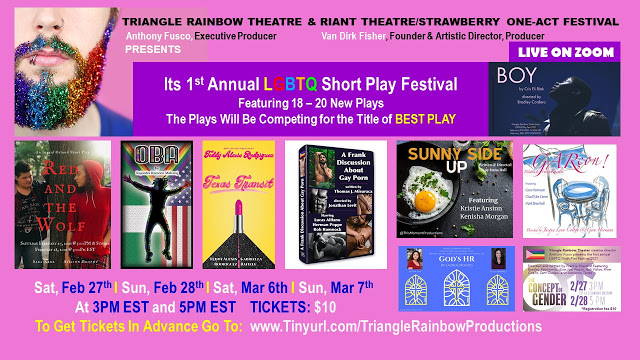 All 20 performances, chosen by Fusco from more than 300 submissions nationwide, will be introduced by Fisher and streamed live (not previously recorded!) on Zoom. The audience will then select the Best Play via a viewer voting poll at the end of each performance group, and the winning playwright will receive a $300 cash prize.

The lineup is as follows:

Bathroom Pep Talk by Blanca Del Loco – Two humans, a bottle of wine, and a whole lot of emotions;

Chlamydia in The Closet by J Myles Hesse – Coming out never burned so bad;

It Ain’t Over Till The Pink Lady Sings by Allison Fradkin – If you’re a lesbian thespian in a production of Grease, you can think straight. You just can’t Pink straight;

Beautiful F . . . G Cars That Don’t Run Properly by Cori Christina – On a late night drive, a gay couple argues over the future of their relationship;

The Concept of Gender by Frankie Eisenhut – Exploring one’s true self;

Boy by Cris Eli Blak – Sometimes the most uncomfortable conversations are the ones we need the most; 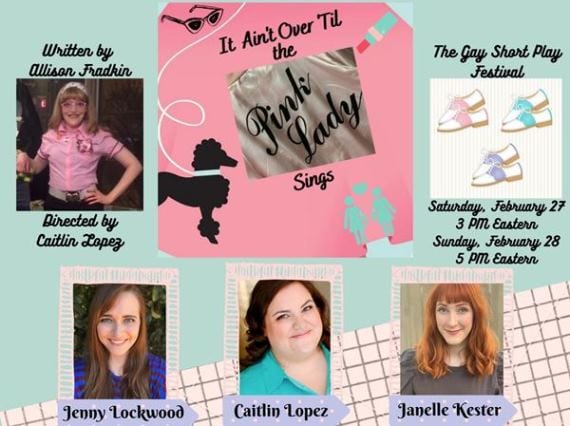 Sunny Side Up by Dana Hall – Sometimes it’s the small things that matter most;

Garcon! by Felix Racelis – Jon introduces his new young conquest to an older friend, but remember what they say about best laid plans;

Boys to Men by Aaron Leventman – Will a 20-something slacker (Devon) grow up in enough time to support his HIV+ partner (Richard) during the height of the AIDS crisis?; 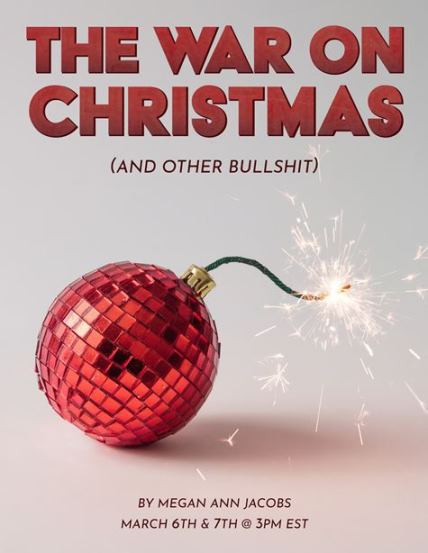 A Monogamy of Swans by John Minigan – No Swans were harmed in the re-making of this relationship;

Fireworks by Jai Mohan – A recipe for a meet-cute;

Oba by Rajendra Ramoon Maharaj – A queer, Muslim, Nigerian man’s journey to the United States of America in pursuit of the American Dream and the many challenges that he faces in that desire;

Senior Moments by Pamela Morgan – You’re never too old to learn something new;

The War on Christmas (And Other Bullshit) by Megan Ann Jacobs – Christmas is the most wonderful time of the year . . . or is it? As Christmas music haunts a college night class, two adults go at it as they fight about the holiday and its segregating factors, but you better watch out . . . you never know who is listening in.

There will also be a talk-back with the playwrights, directors, and actors, moderated by Fisher, on Saturday, March 6, following the 3 pm show. 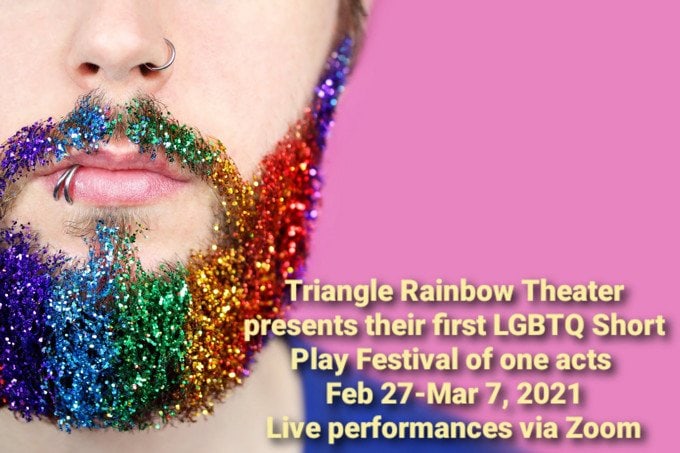 The LGBTQ Short Play Festival livestreams Saturday, February 27-Sunday, March 7. For tickets (priced at $10), go online. After registering, you will be sent a link, which will allow you to watch all the plays performing in that time slot; you must register again to watch the plays on a different day. Following their live debuts, the groups will be available on demand on Vimeo, on various dates from March 1-15.